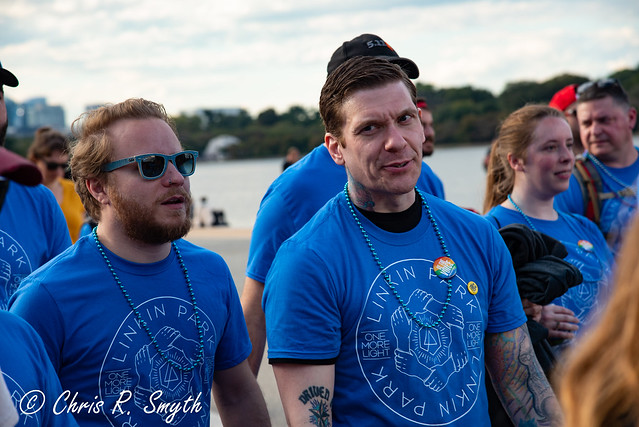 Brent Smith and Zach Myers participate in the Out of the Darkness Community Walk on Oct. 20, 2018. (Photo by Chris Smyth)

On a picture perfect autumn day, beneath a partly sunny sky, over 3,000 people showed up to the steps of the Lincoln Memorial to express emotions of love, support, and hope. On Saturday afternoon, the American Foundation for Suicide Prevention held their Out of the Darkness Community Walk in the Nation’s Capital. Saturday’s walk is just one of hundreds that take place all across the country this year to help bring awareness and raise money, to work towards changing the culture’s approach to mental health.

This year, Brent Smith and Zach Myers, the lead singer and lead guitarist of Shinedown, participated in the walk.

Leading the group of thousands in a march around the tidal basin, Brent and Zach used their celebrity status to bring awareness to a cause that is important to them — a cause that affected them personally. Just minutes before leading the group on the walk, Zach Myers spoke with Chris Smyth of Parklife DC about why they came to DC to participate in the day’s events.

Chris Smyth: You guys are a big band. You could have just written a check. Why was it so important to physically come here and be a part of today?

Zach Myers: Suicide has touched me in several ways. People who were our peers, Chris Cornell, Chester (Bennington of Linkin Park), people like that have committed suicide. My cousin committed suicide when I was 14 years old. It changed my life forever. It’s something I still think about, it changes my life everyday. Being a kid who was bullied and have never had those thoughts, I feel like I can lend myself to people who have had those thoughts. It has never even crossed my mind, but it’s in my family, and it rocked my family. So it felt really important to show up and do this. Writing a check is easy. Coming here and being a part of it, and standing with these people who have been affected by this is one of the most important things you can do.

Watch the official music video for “Bully” by Shinedown on YouTube:

CS: You mention being bullied. You have a song titled “Bully.” You have “Unity” and now “Get Up,” songs that talk about adversity, despair, and overcoming that. Why is that such a focal point of much of your music?

CS: Finally, to change gears, you just finished a tour and announced a new headlining tour. You are coming to nearby Baltimore. What can fans expect from the new tour?

ZM: It’s going to be a big show. We’re bringing out Papa Roach and Asking Alexandria. We are super looking forward to it. We always up it. We are going to blow a lot of stuff up, and we’re going to have some fun. And we get a longer set. The co-headline tour has been great, but doing an arena headline tour is a lot of fun because you get to play a longer set, so we are looking forward to it.

Watch the official music video for “Get Up” by Shinedown on YouTube:

After finishing the walk, Brent and Zach performed a three-song acoustic set for the participants. On a stage in the shadow of the Lincoln Memorial, Zach Myers claimed that “this is probably the coolest place I ever played guitar.” Two of the songs performed, “Unity” and their latest single “Get Up” contain lyrics of dealing with, and overcoming adversity, a message that resonated with the crowd as many people could be seen crying as they listened to the songs and reflected on the loved ones they have lost. The third song, Shinedown’s cover of “Simple Man” was not planned, but as Brent stated, was being played at the request of a walker named Lisa, and her son.

The DC walk has already raised over $270,000. If you care to donate, or would like to participate in a walk close to you, you can go to the American Foundation for Suicide Prevention’s website at afsp.org to find all of the information you need.

Here are some pictures of Brent and Zach of Shinedown participating and performing in the Out of the Darkness Community Walk along with other scenes from the walk on Oct. 20, 2018. All photos copyright and courtesy of Chris Smyth. 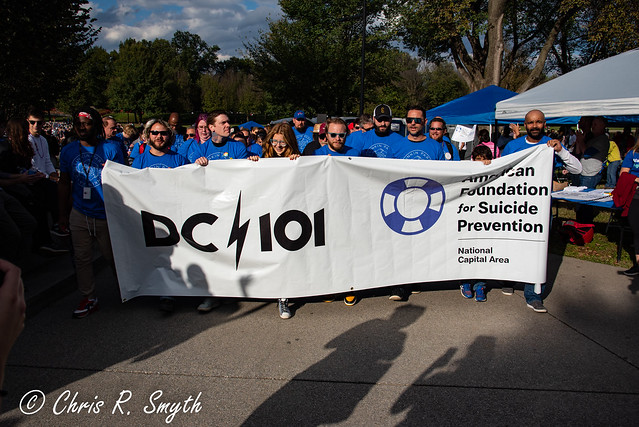 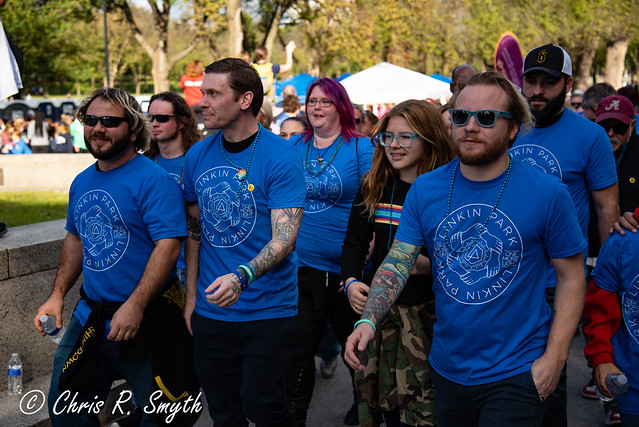 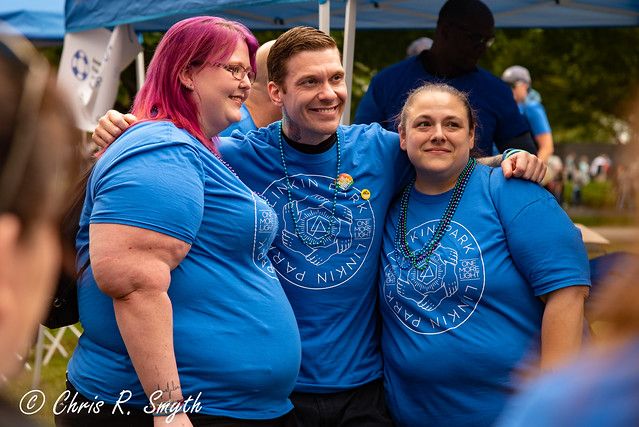 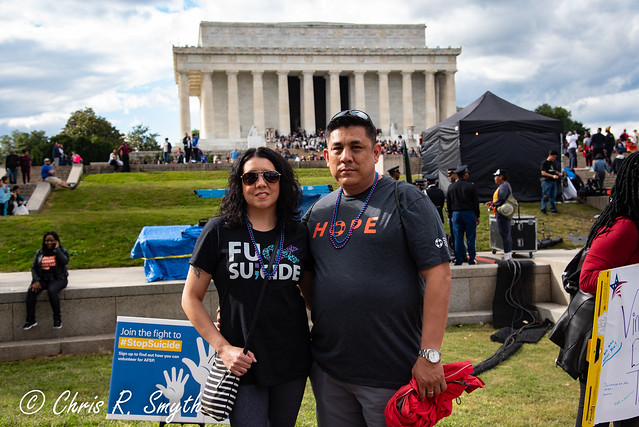 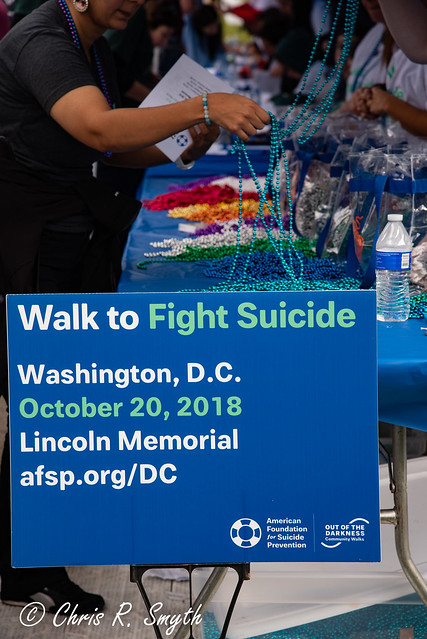 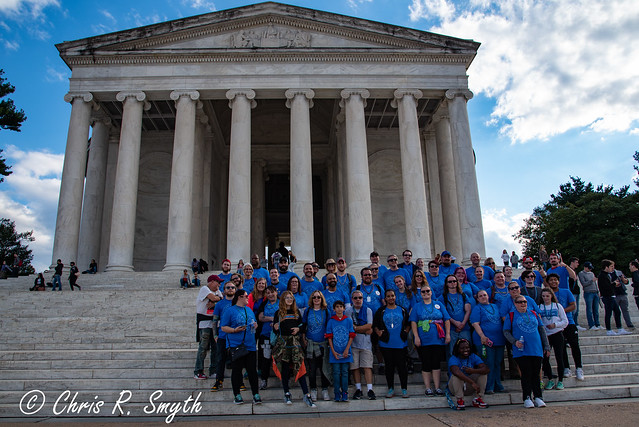 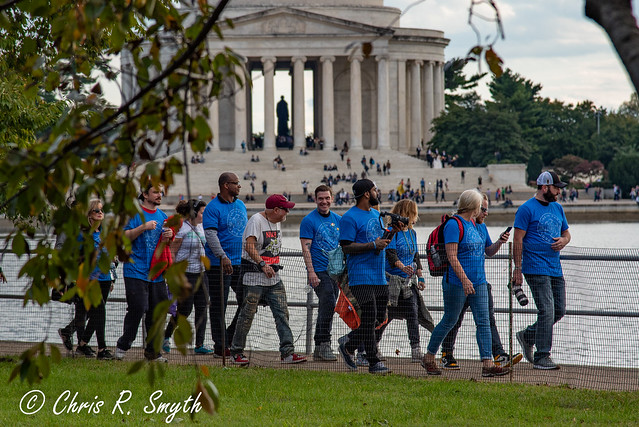 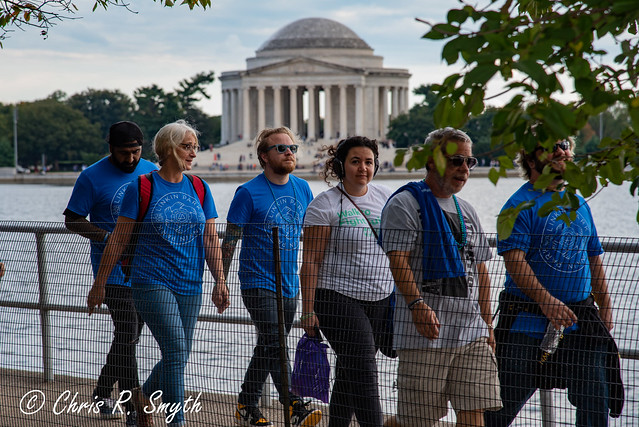 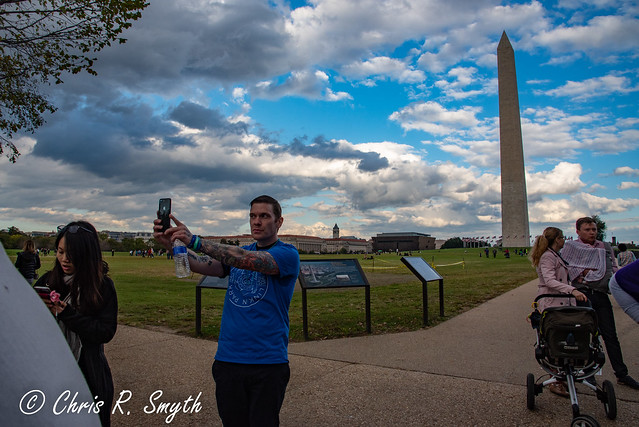 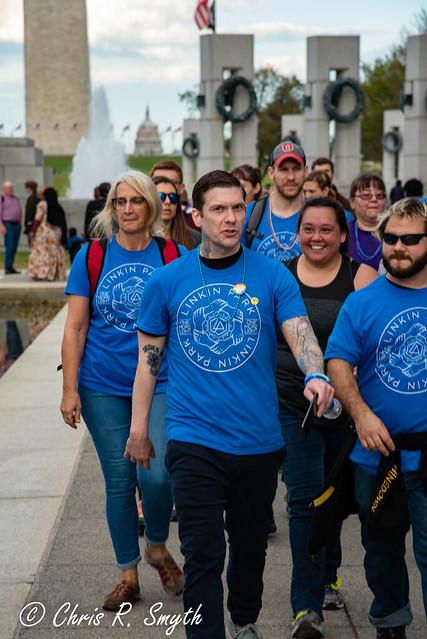 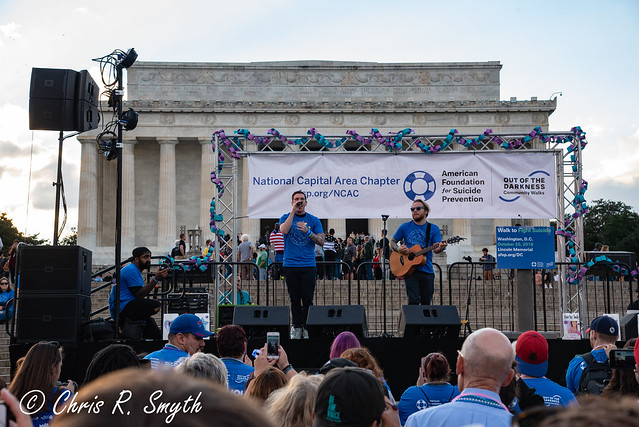 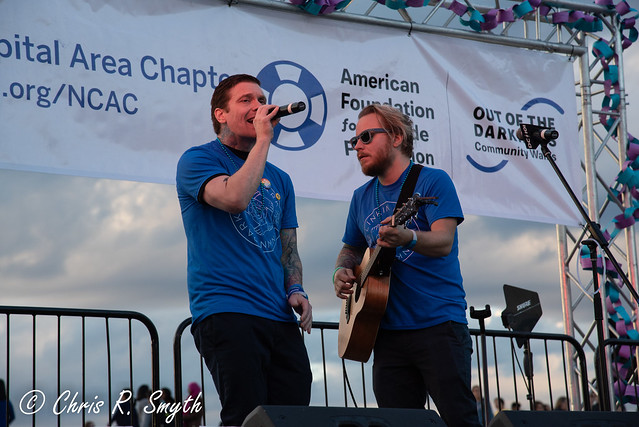 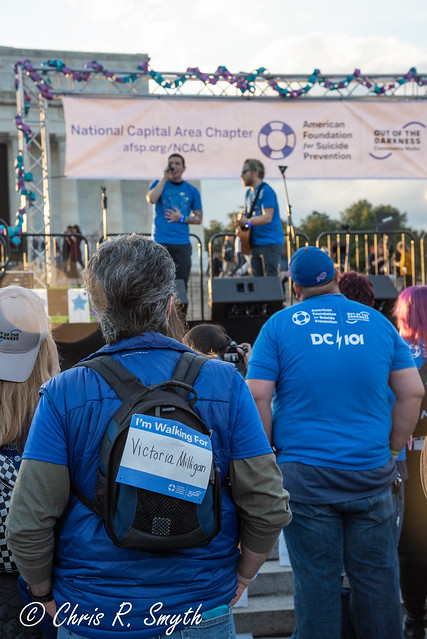 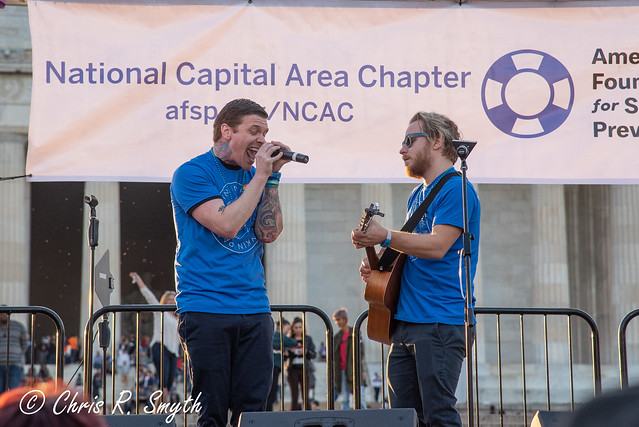 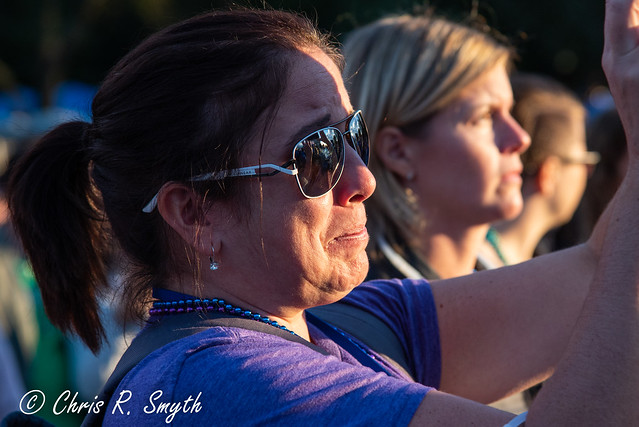 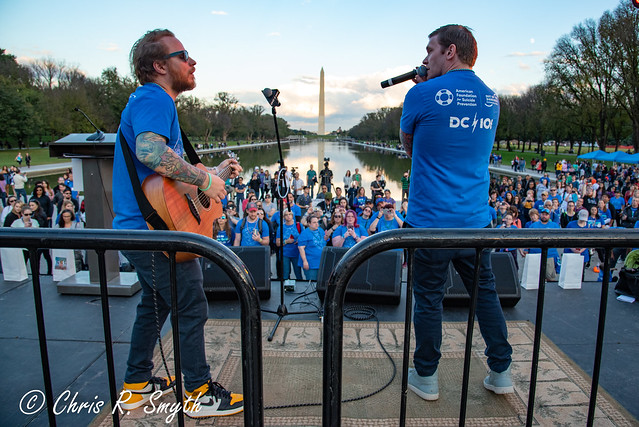 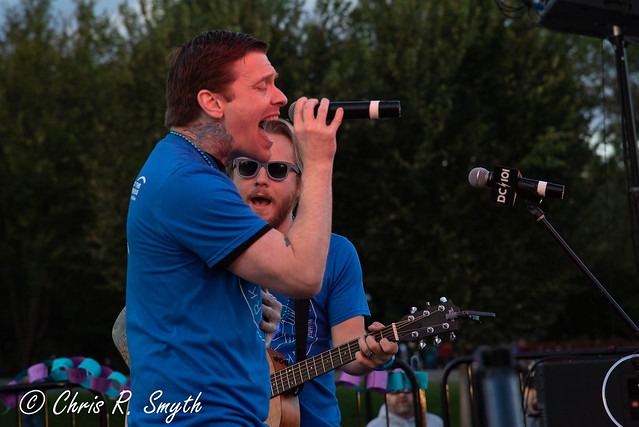 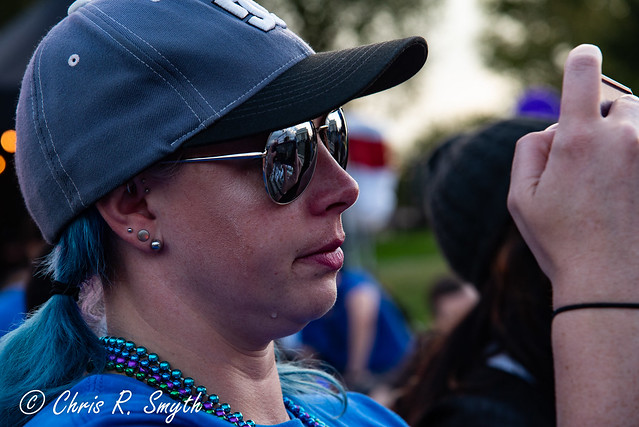 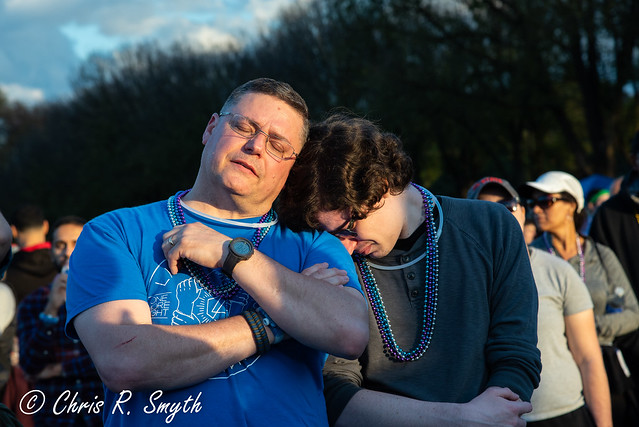 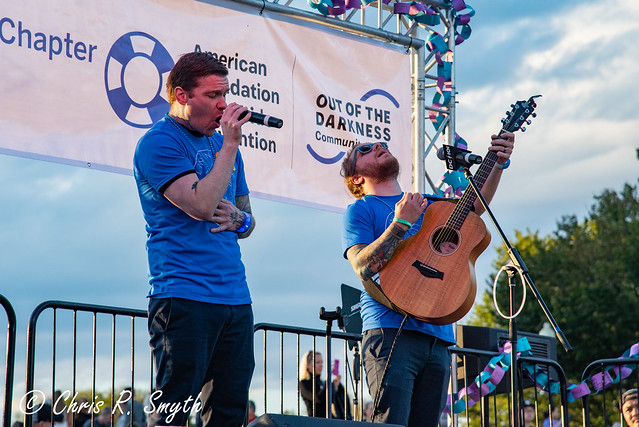 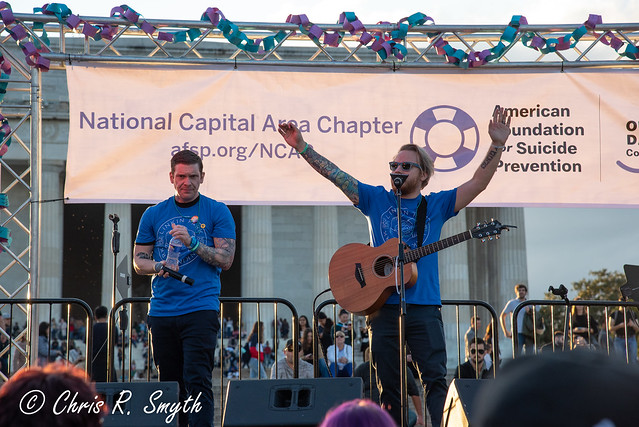