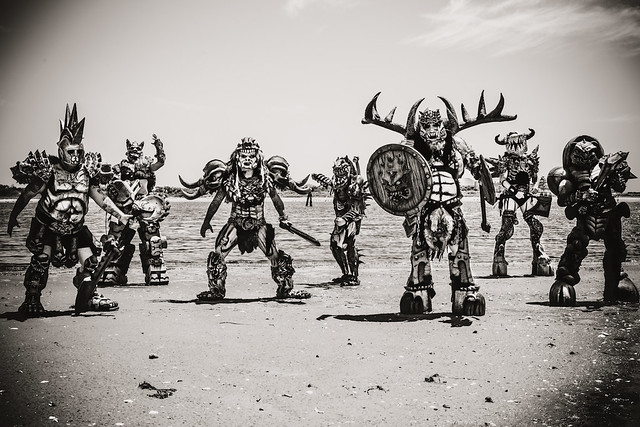 Intergalactic scumdogs Gwar invade DC to take over 9:30 Club on Saturday, Dec. 29 with music from their new album, Blood of Gods.

On the description of the album, Gwar salutes their former leader Oderus Urungus, portrayed by the late Dave Brockie:

“The Blood of Gods is the first Gwar album without the band’s fallen leader, Oderus Urungus. The title of the album refers to the loss of Oderus and the struggles and triumphs that produced the new sound of the band. Born of adversity, The Blood of Gods is a sonic scar… a question asked and answered… Death cannot kill Gwar. Nothing can.”

Watch the official music video for “Viking Death Machine” by GWAR on YouTube:

In a review for Loudwire, Joe Divita welcomed the latest incarnation of Gwar.

“So, what do we love about GWAR anyway? Well, there’s always been a playful dynamic to their diverse musical palette. There’s always been grin-inducing social commentary delivered in an overtly crass yet somehow poignant manner, while other times entering realms of absolute absurdity. There’s always been a punk-meets-metal enthusiasm with a few outside styles creeping their way into GWAR’s deranged Frankenstein songwriting approach. There’s always been a cast of support characters roped into new storylines, adding an even broader scope to the vocal element of the band, which already featured a handful of different sounds courtesy of Oderus. The Blood of Gods checks each one of these boxes,” Joe wrote.