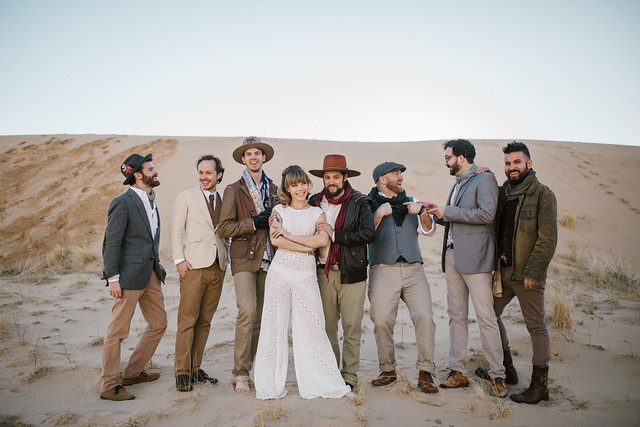 To salute the hugely influential first two albums by The Band, The Dustbowl Revival and Hot Club of Cowtown will play select songs from Music From Big Pink and The Band, while mixing in some of their own material as well.

Hot Club of Cowtown’s Elana James said, “This isn’t strictly a ‘tribute’ show. It’s more a testament to the timelessness and broad influence of The Band’s songs. It’s a way to weave our own material through them and let that resonate.”

Both music groups see The Band’s influences in their genres. Hot Club’s deft melding of European hot jazz and Western swing demonstrates how Texas dancehalls and Parisian cafés may be kissing cousins after all. And Dustbowl Revival combines Memphis soul, contemporary folk, Dixieland jazz, and blues.

In gearing up for “Across The Great Divide,” each group claimed favorite Band tunes that they’re most excited about sharing.

Elana loves “This Wheel’s On Fire,” a favorite she enjoyed playing during her brief, magical time touring in Bob Dylan’s band, particularly for how the song plunges into “this mysterious, cosmic place.” She also touted her Hot Club co-founder Whit Smith’s prayerful rendition of “I Shall Be Released.” Zach Lupetin of the Dustbowl Revival revealed that drummer Joshlyn Heffernan turned his bandmates on to “Don’t Do It,” which has become one of their instant party-starter tunes, and they also have a lot of fun with the “swampy weird good-time jam” of “Rag Mama Rag.”

Buy your tickets for the matinee show online.

Buy your tickets for the evening show online.

The Dustbowl Revival and Hot Club of Cowtown
The Great Divide: A Celebration of the 50th Anniversary of The Band
Wolf Trap
Saturday, Feb. 2
Show @ 3pm
Show @ 8pm
$32/$37
All ages