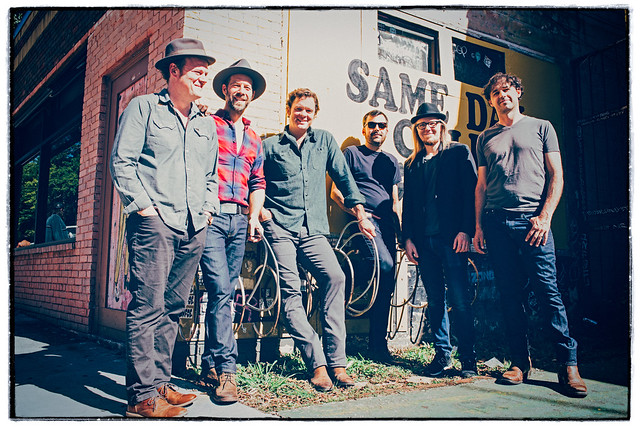 Steep Canyon Rangers released Out in the Open, their most recent album, in 2018 via Ramseur Records. The North Carolina bluegrass band is on tour with a stop at The Hamilton Live on Friday, Jan. 25.

In July 2017, Steep Canyon Rangers arrived at Fidelitorium Recordings, an intimate studio facility built, owned, and operated by legendary producer Mitch Easter. The band soon discovered that their producer — along with engineer/mixer Jason Richmond — intended to record all six members singing and playing in a room with no overdubs. The organic process allowed SCR to work fast, tracking a dozen songs in less than four days.

Watch Steep Canyon Rangers play “Let Me Die in My Footsteps,” a cover of Bob Dylan, live at Red Rocks on Aug. 6, 2018:

In a review of Out in the Open for NPR Music, Jewly Hight welcomed refined and nimble new music from Steep Canyon Rangers.

“Rather than idealizing memories of people and places as an abiding source of comfort, the songs illustrate how the passage of time, accumulation of experience and changing of perspective can alter a person’s relationship to the familiar. ‘I can’t unsee what I’ve been shown,’ laments the soldier protagonist of ‘Can’t Go Home.’ ‘My body’s bent and my mind is blown / And I never was ready for the things I’ve known / I can find the house, but I can’t go home.’ Over a decade and a half in, that kind of equanimity, that thoughtful rewriting of familiar templates has become a Rangers specialty,” Jewly wrote.

The show is close to selling out! Buy your tickets online.