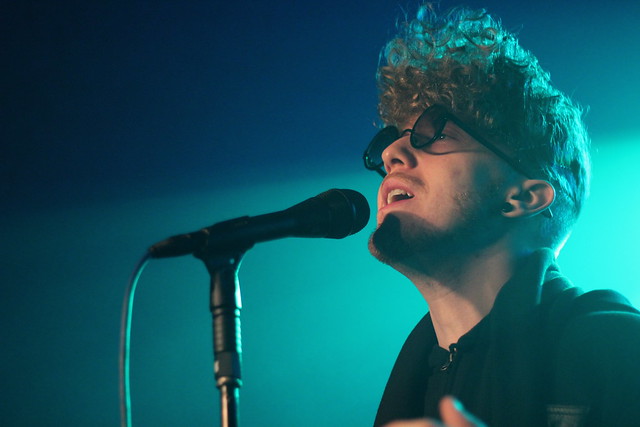 Daley performs at the Motel Mozaique Festival on April 6, 2013. (Photo by Rene Passet)

What better way to begin the Feb. 1 show than with “Time Travel,” from his 2014 debut album Days & Nights. Daley stood center stage in all black, peering through sunglasses, as he delivered the lyrics that pondered the possibilities of bending spacetime. “In an alternate dimension, maybe we could start again,” he sang as the lights from above turned his signature red curly hair into a purple-hued high top. The song set the tone for the night and transported the audience to Daley’s universe of nouveau retro soul.

Things got funky on “Sympathy,” off Daley’s 2017 sophomore album The Spectrum. The dance track employed a prominent bass line and uptempo piano chords to create a groove like something off Prince’s 1999 album. The Purple One’s influence can be heard in the composition as well as Daley’s falsetto delivery.

Stream The Spectrum by Daley on Spotify:

The British vocalist showed the extent of his musical inspirations during the performance of “Blame the World,” from Days & Night. The song uses a distinctive element from, the oft-sampled, 1969 William Bell’s classic “I Forgot to Be Your Lover,” from the Wow… William Bell album. Daley, apparently a student of his craft, blended the riff into a soulful track well suited for his impassioned vocal delivery.

Daley paid tribute to the R&B of the late ’90s and early ’00s with his performance of “Rain,” by SWV, Jon B.’s “They Don’t Know,” and “I Wish,” by Carl Thomas. The audience enjoyed every second of the montage as they sang the contemporary R&B classics in unison.

Unity and inclusivity was the vibe for the night. Gay, straight, black, white, Asian, and Latino all sang, swayed, and swooned collectively. To the left of the stage, under their own spotlight, were a pair of sign language interpreters who took turns conveying not only Daley’s lyrics but also the emotional impact behind the words.

The interpreters had their work cut out for them on “Temple.” The sparse lyrics and atmospheric harmony delivered an otherworldly feel that defied words. Daley waded into spiritual waters on the track, but it’s as much of a gospel song as Madonna’s “Like a Prayer,“ which is to say not at all. “Have you ever been so consumed by someone that they become your religion,” he asked the crowd.

Daley came across as honest and humble during the show. He spoke of perseverance before his performance of “Those Who Wait,” the title track from his 2011 EP. “This was a time when I was really trying to figure my shit out, and stay focused, and keep the faith that what I was doing would eventually pay rewards. It still stays relevant to me now,” he said about the song.

It was nearing the one-hour mark of Daley’s performance and almost time for us to don our coats and brave the cold, but the frigid temperatures beyond the 9:30 Club’s brick exterior would have to wait for one final dose of R&B nostalgia.

Daley closed the night with a cover of fellow English soul musician George Michael’s, “Careless Whispers.” The audience and I lost ourselves as we sung, “I’m never gonna dance again. Guilty feet have got no rhythm…” The cold awaited, but the night’s music had fortified our souls.