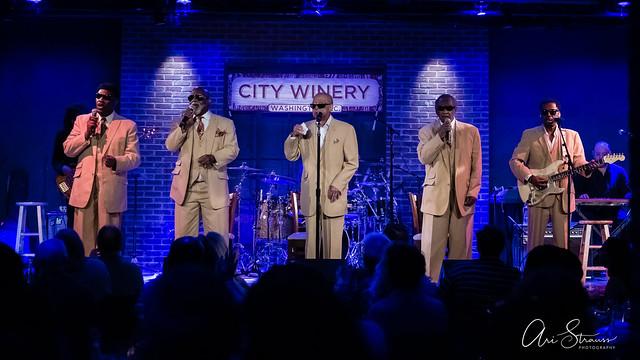 The Blind Boys of Alabama perform at City Winery on March 24, 2019. (Photo by Ari Strauss)

The titans of gospel took everyone to church when The Blind Boys of Alabama performed a show at City Winery in DC on Sunday. The Grammy Award winning group put out a 90-minute set which, by the end, had the crowd on its feet, dancing with hands raised, and giving the occasional, “Amen” to the men on the stage.

The Blind Boys of Alabama have been performing as a group for the better part of seven decades. They first sang together in 1939 at about 9 years of age in the school chorus of the Alabama Institute for the Negro Blind. As they got a little older, the boys would perform for soldiers at training camps in the South during World War II. By 1945, the boys had dropped out of school and began touring the gospel circuit. They’ve never looked back. In over 70 years of touring, the band has recorded over 60 albums, collected five Grammy Awards plus the Grammy Lifetime Achievement Award, been inducted in the Gospel Music Hall of Fame, performed in the White House for three US Presidents, and collaborated with numerous artists along the way, including Bonnie Raitt, Stevie Wonder, Prince, Lou Reed, Mavis Staples, Susan Tedeschi, and Willie Nelson, just to name a few.

I first learned about The Blind Boys of Alabama when they collaborated with Ben Harper in 2004 to produce, There Will Be a Light. The album, which won the 2005 Grammy for best traditional soul gospel album, introduced me to the beauty of gospel and has become a seminal item in my personal music collection. My two favorite tracks are the title track, “There Will Be a Light” (for when I’m feeling melancholy) and “Church on Time” (for when I’m feeling peppy).

Listen to There Will Be a Light by Ben Harper and The Blind Boys of Alabama on Spotify:

Sadly, Jimmy Carter is the only remaining Blind Boys founding member; the rest have passed on. Jimmy served as the Master of Ceremony during the group’s performance and at 87 years of age, he’s still got a lot of pep in his step. He frequently jumped in place with his microphone, waving his arms to rouse up the crowd. The other voices in the group were Paul Beasley, Ricky McKinnie, Ben Moore, and Joey Williams, who is sighted and serves as the band’s guitarist and musical director.

The Boys were backed by Austin Moore on drums, Steve Ray Ladson on bass, and Pete Levin on keys. I’d be remiss if I didn’t mention the group’s tour manager, Chuck Shivers, who I think is among the hardest working tour managers on the road. Since four of the five singers are blind, Chuck took great care to bring the boys out on stage and get each member situated in their spot with their designated microphones. He also served as a human applause sign, getting the crowd pumped up while the boys get settled in place.

The band began with a stirring rendition of “Do Lord” to get things warmed up. They then transitioned to a gentler song, “Almost Home,” which is the title track of their most recent album, which was released in 2017. It was somewhat autobiographical in looking back on the long, hard road the group has taken — beginning in the deep south before the era of civil rights — but ultimately showing gratitude for the journey and everything it’s brought them.

Deeper in the setlist, Paul gave a fantastic demonstration of his falsetto ability on “There Will Never Be Any Peace (Until God Is Seated at the Conference Table).” During his solo, Paul rose to his feet and sang with arm fully outstretched, almost reaching into the sky for the high notes.

Toward the later third of the set, Nashville-based singer-songwriter Amy Black joined the boys on stage for “I Shall Not Be Moved.” The song, which describes how the singer was “like a tree planted by the waters” who “shall not be moved” because of their faith in god, gained popularity as a protest song during the Civil Right movement.

Amy provided the opening act that evening — a very enjoyable Americana solo set — but in my opinion, her star shined brightest while performing as a soul singer with a gospel band behind her, a performance no doubt informed by her Southern roots growing up in Muscle Shoals, Alabama.

Following a riveting rendition of Amazing Grace, the band concluded its main set with “Drive.” “Drive” is a frequent end-of-set song and Jimmy and Chuck (the tour manager) have a well-practiced schtick. Jimmy jumped to his feet and tried to move forward, closer to the audience. Chuck grabbed Jimmy’s hand feigning to hold him back then ultimately relented and escorted Jimmy down the stage stairs so he can move around and mingle with the audience, jumping — have I mentioned this 87-year old man loves to jump — and offering hugs and handshakes to anyone he encounters along the way — all the while singing with band backing him on the stage.

The fellas came back on stage for one encore and gave a very soulful rendition of Stevie Wonder’s “Higher Ground.”

Enjoy some photos from The Blind Boys of Alabama performance at City Winery DC on March 24, 2019. All images copyright and courtesy of Ari Strauss. 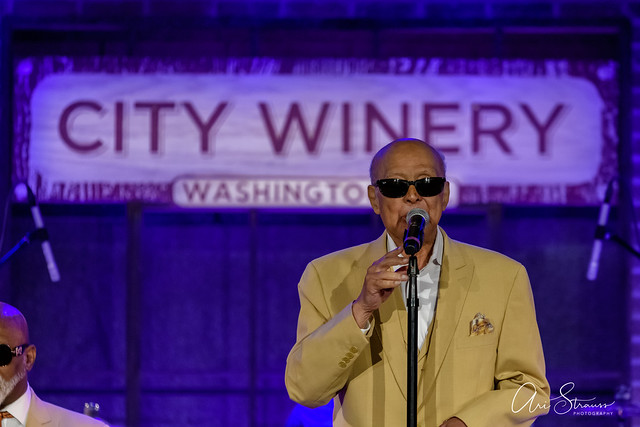 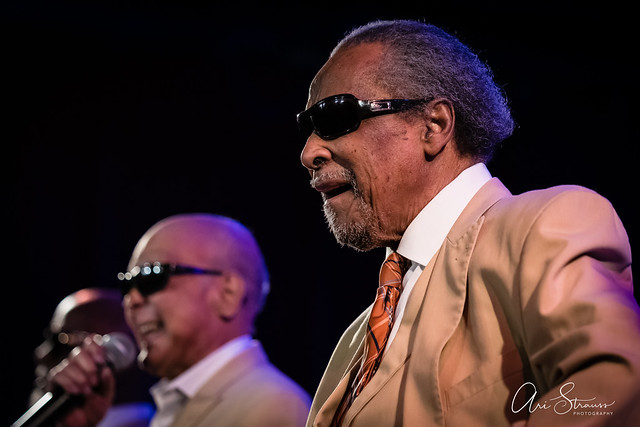 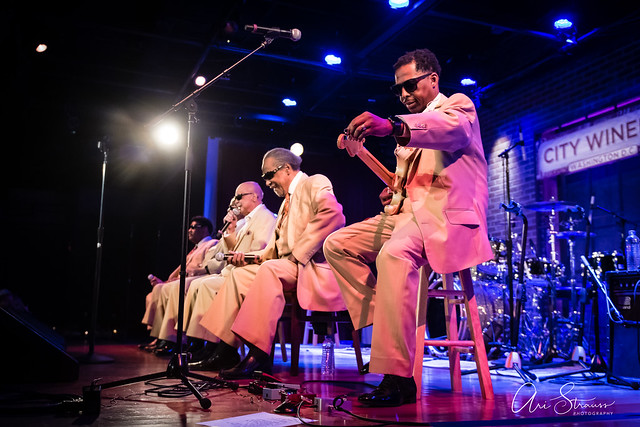 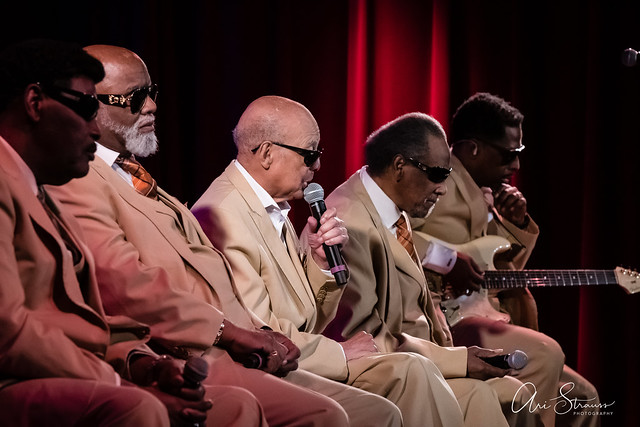 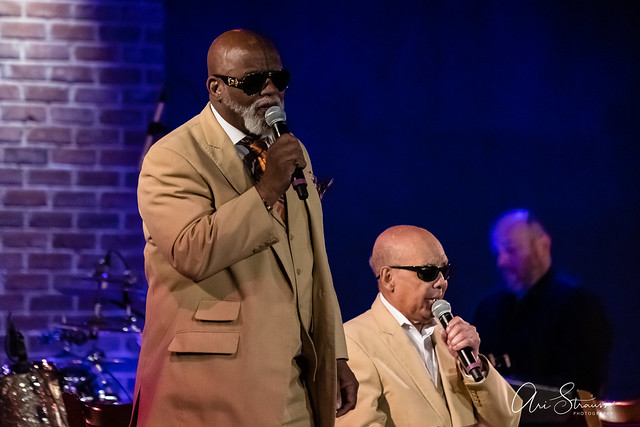 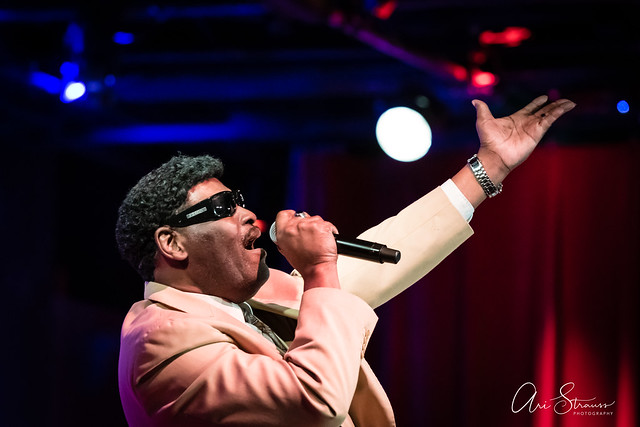 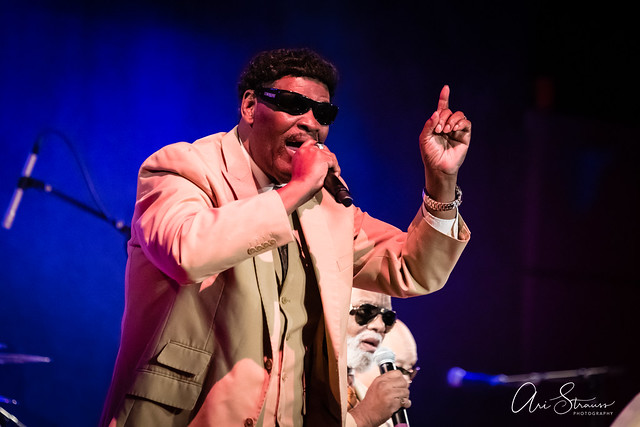 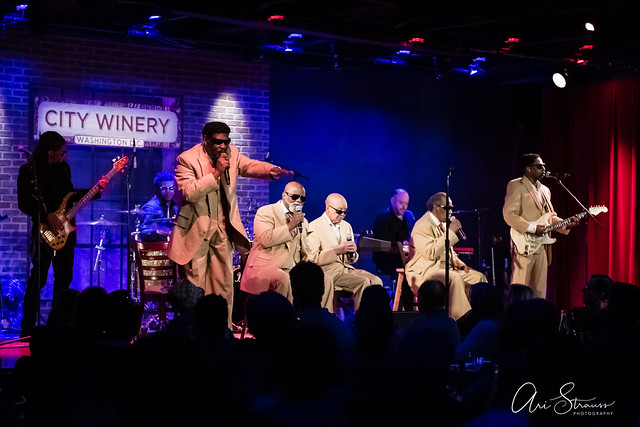 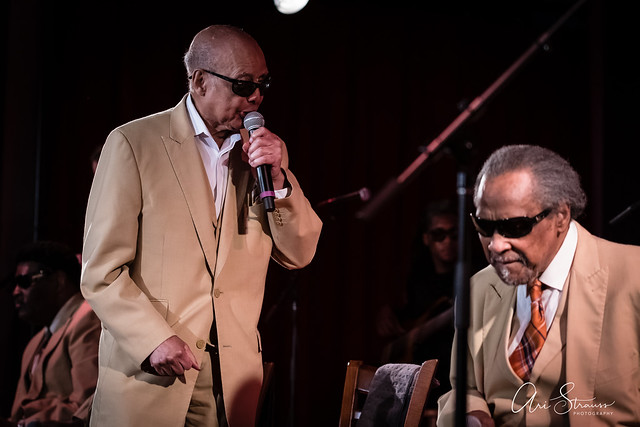 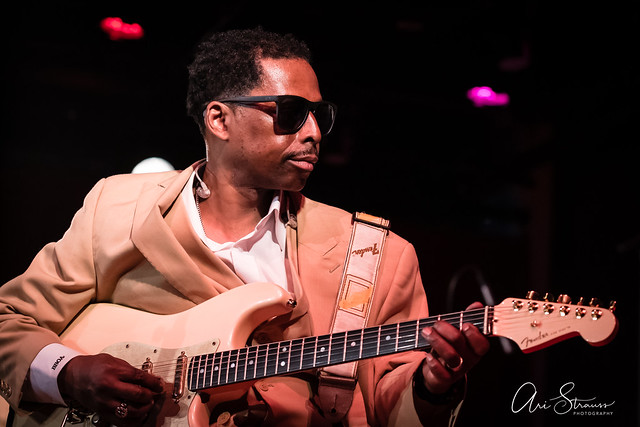 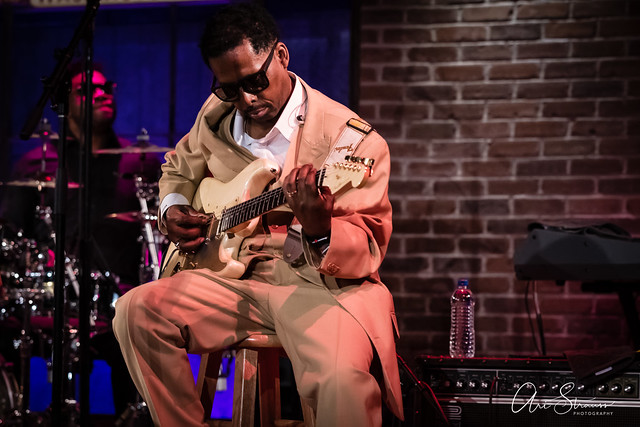 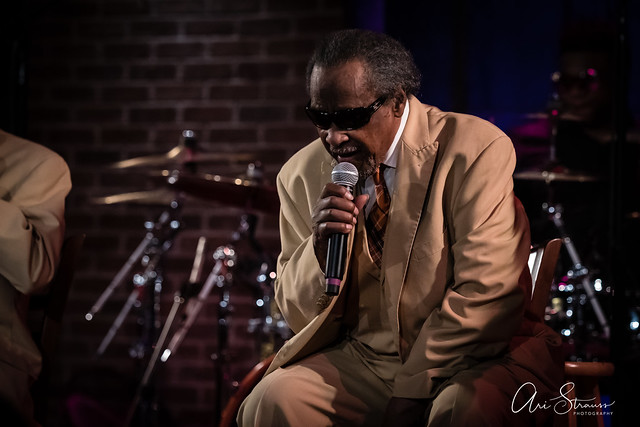 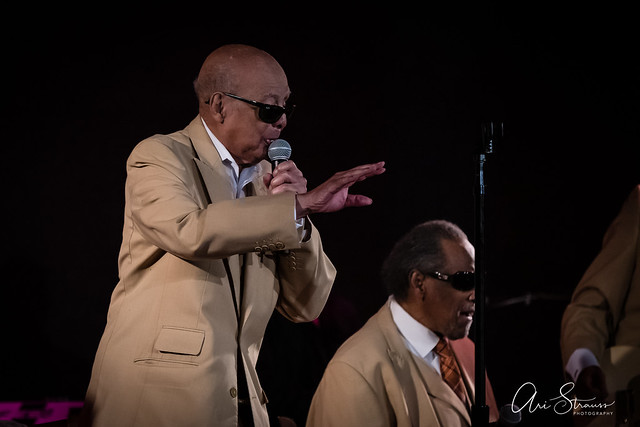 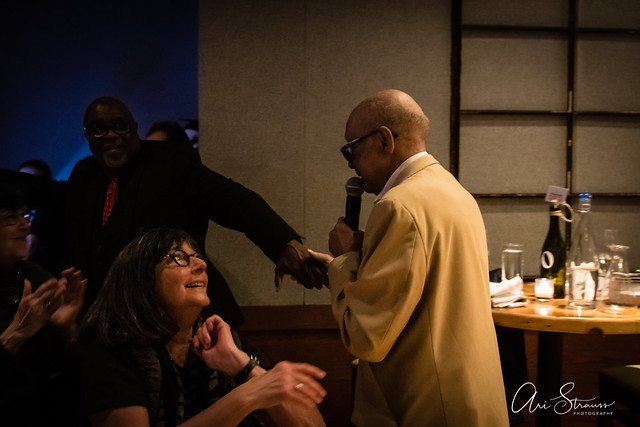 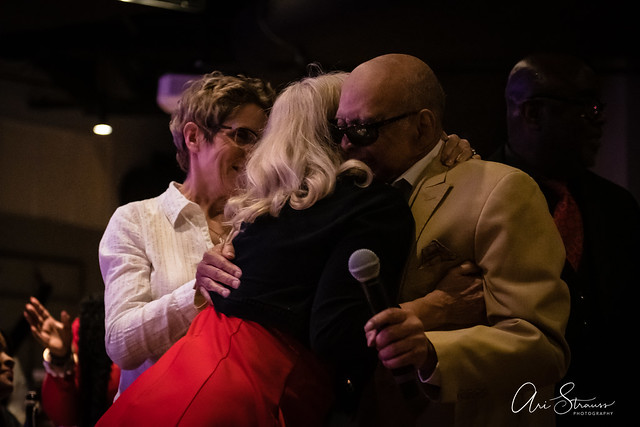 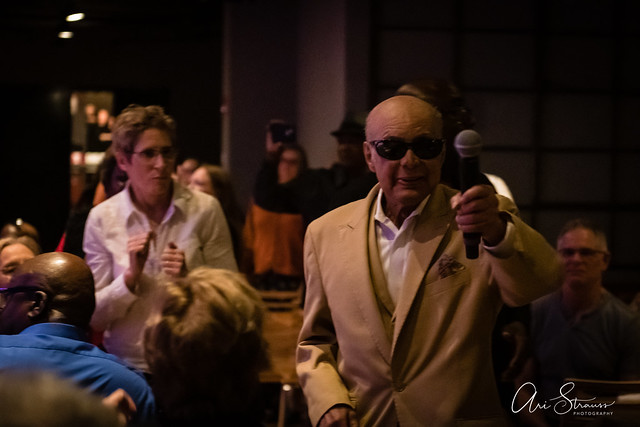 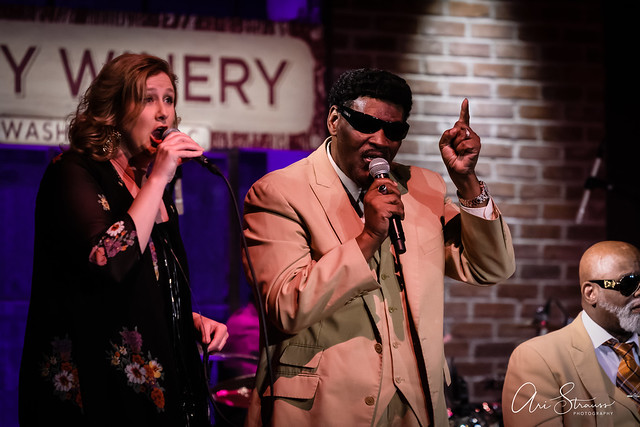 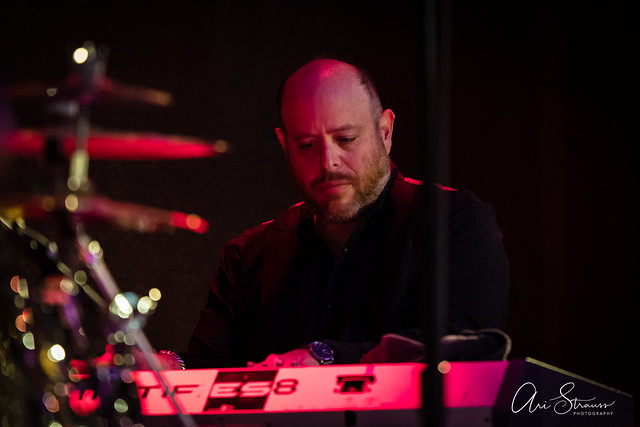 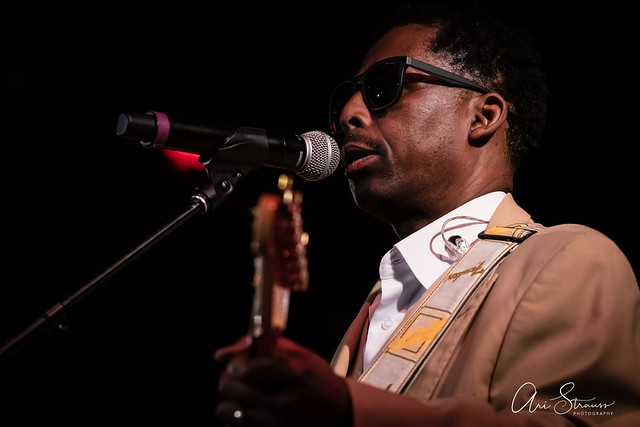 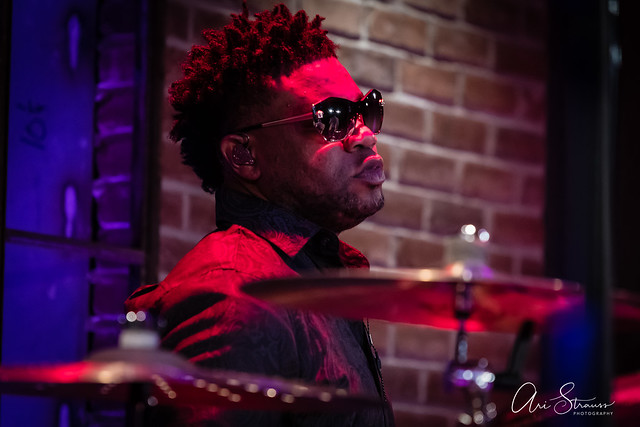 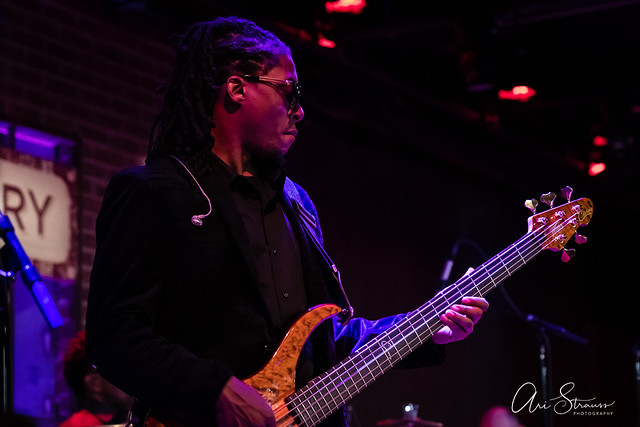 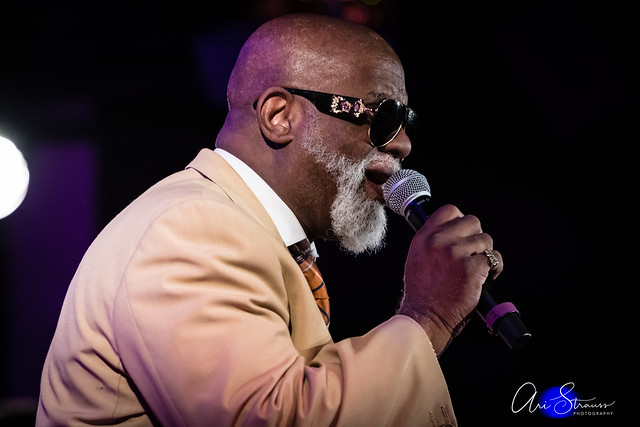 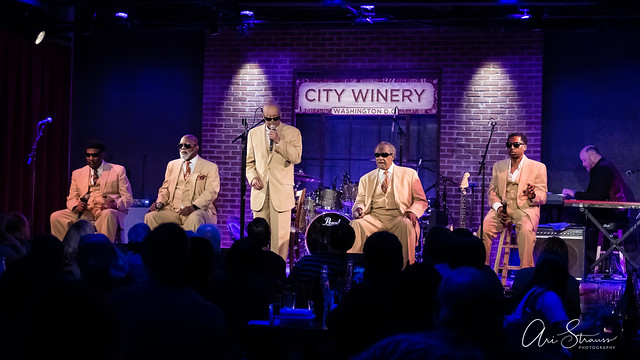