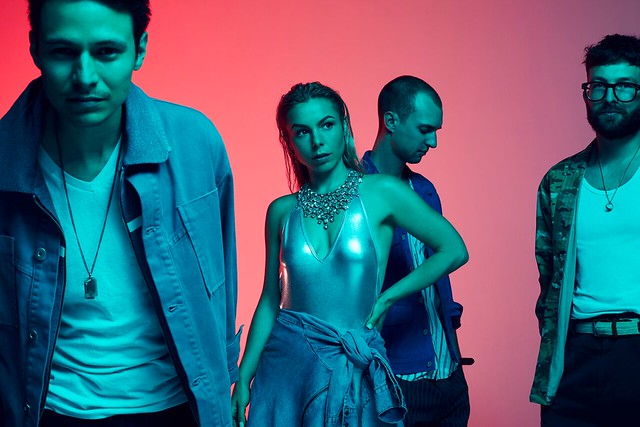 British trip hop quartet Haelos will release Any Random Kindness, their second studio album, via Infectious on May 10. But the band hits the United States early for a tour, including a show at U Street Music Hall on Saturday, April 6.

Lotti Benardout, Arthur Delaney, Dom Goldsmith, and Daniel Vildosola reflected on the state of human interaction and specifically kindness when crafting the new record. They decamped to the English countryside to remove themselves from urban distractions when recording.

“We were looking deeply at how we lived, and how people live around us,” Dom said. “We noticed the boom of social media and online life, and how that was affecting real life. We’ve been creating these avatars online that aren’t really human. Maybe we’ve lost our connection with each other.”

Watch the official music video for “Kyoto” by Haelos on YouTube:

In a review for Pitchfork, Cameron Cook said Haelos’ debut album capture the best of trip hop’s origins while also modernizing the genre.

“Haelos’ debut LP, Full Circle, brings to mind the heyday of trip-hop and British electronic explosion. All of the genre’s biggest characteristics are here — ethereal vocals, muted breakbeats, swelling keyboards, and the occasional reverberating guitar. But Full Circle resolutely repurposes almost every aspect of ’90s trip-hop at no loss to its integrity or listenability. It’s both a total throwback and rooted in 2016, like a fermentation of ideas born 20 years ago and brought back to life with surprising potential,” Cameron wrote.