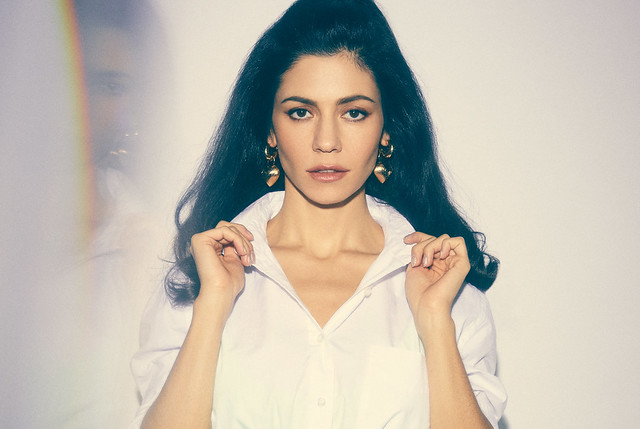 Marina, formerly known as Marina and the Diamonds, released Love + Fear, her fourth studio album in April via Atlantic Records. The Welsh pop siren returns to DC on the Love + Fear Tour for a show at The Anthem on Wednesday, Sept. 18.

The latest album by Marina Diamandis was inspired by the work of psychologist Elisabeth Kübler-Ross, who said, “There are only two emotions: love and fear. All positive emotions come from love, all negative emotions from fear.”

Marina explained, “I can trace a lot of my behavior back to these two emotions, particularly in relationships. When thinking about an album title to encapsulate the record, I played the 16 tracks and listened closely for sonic or lyrical themes that appeared to crop up again and again. I quickly sensed a very clear, concise divide of songs that came from a feeling of love and songs that stemmed from a feeling of fear. I also used this process to name my last album FROOT. It’s a simple way of decipher the main messages running through an album, as I often only recognize an album’s main message once it’s completed and I’m able to look at it from afar.

Watch the official music video for “To Be Human” by Marina on YouTube:

In a review for AllMusic, Neil Z. Yeung says a rejuvenated Marina kicks off her new record with “joyous dance-pop cuts and feel-good anthems packed with enough lyrical life mantras to fill a gallery’s worth of affirmative self-help posters.”

“As the first offering of a new stage in her career, Love + Fear not only reveals its creator as newly hopeful, but it also gives hope that future efforts might be carved in a similar fashion. Marina’s Electra heart still beats, it’s just pumping smoother and with a confidence born from a renewed and mature perspective,” Neil wrote.