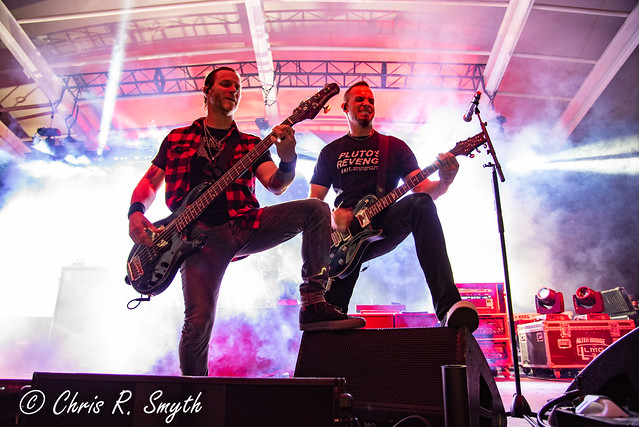 On the final night of the summer, Alter Bridge kicked off the Victorious Sky co-headlining tour with Skillet at MECU Pavilion in Baltimore.

Opening the set with “Wouldn’t You Rather,” the first single released off of their forthcoming new album, Walk the Sky, Alter Bridge set a tone of confidence as they took the stage. With hit song, “Isolation,” played second, it was clear that high-quality hard rock was still alive in 2019.

Stream Wouldn’t You Rather by Alter Bridge on Spotify:

On this night, Alter Bridge decided to forgo many of their famous hit ballads in favor of their heavier songs, with “Rise Today” and an incredible version of “Addicted to Pain” both making it into the setlist.  Alter Bridge also showcased Walk the Sky, playing “Pay No Mind” and their newest release, “In the Deep.”

As good as the overall set was, it was the epics “Cry of Achilles” and “Blackbird” performed back to back, that took the audience on a journey of musical and lyrical magnificence.

After the performance of “Ghosts of Days Gone By,” lead singer Myles Kennedy admitted that he had woken up “sick as a dog” that morning. While Myles powered through the show and still showed off one of the purest voices in rock and roll today, he and the band made a last second change to the set to give his vocal chords a rest. By adding in “Waters Rising” from the Fortress album, Myles was able to step back from the microphone as lead guitarist Mark Tremonti took over and sang lead.

With highlights too numerous to count, the Alter Bridge fans left Baltimore Harbor, and ended their summer in one of the best ways possible, witnessing hard rock performed live at the highest level.

A few days prior to the concert in Baltimore, Mark Tremonti spoke on the phone with Parklife DC and previewed what can be expected on the Victorious Sky tour and the upcoming Walk the Sky Album. [Editor Mickey McCarter pitched questions developed by Chris Smyth in the phone interview.]

Chris Smyth: What can fans expect at the show and how do you feel about starting off the new tour?

Mark Tremonti: Great! You know, we’ve had two shows so far [at the time of this interview]. We did the listing party in Orlando and last night Raleigh, but our Skillet shows are going to have a larger production than we’ve ever had, and we are just going to start introducing more and more new songs off the new record. So right now, we’re playing four new tracks from Walk the Sky, and there’s a new great track coming out in the next week or so, so we’ll start playing that as well.

CS: What excites you about playing the new songs live and as you were suggesting there, what will we get to hear that’s not released already?

MT: We won’t play anything that’s not released. But anytime a great track’s released, we usually play that live. So, it could be up to five new songs.

CS: When you have something like that and people were hearing it for the first time, how do you feel about it? Is there a particular thrill or interest or focus on your part?

MT: Yeah. You know, you’re excited about letting people hear the song the first time — you’ve worked so hard on it. Performing for the first time, you have to be on your best game just because a lot of times the first time people are hearing the song, it gets on YouTube and it circulates. So you got to make sure that you perform it as well as you can right out of the gate.

CS: So you spent the last year or so on tour with your band Tremonti, and Myles Kennedy was off touring his solo record and then with Slash and the Conspirators. Did you guys collaborate on ideas during this time doing separate things, or did all the writing happen once you got back together, and how did that process go?

MT: We pretty much worked separate on this record where we recorded extensive demos on our own. When we came to the studio, we only had five weeks to record this record, so we made sure that we came to the studio really prepared and everything was all dialed in. Myles and I both did about seven or eight demos a piece and then we chose the best from those demos to make the record.

CS: Is that different how you’ve done it in the past?

MT: Yeah. Usually me and Myles would get together on every single song and collaborate on every song. But this time, we didn’t have that luxury because we had such a short time in the studio, so we had to make do.

CS: On the song “Wouldn’t You Rather,” the opening riff is pretty heavy. How do you decide what works for an Alter Bridge song versus a Tremonti song?”

MT: The only time something won’t be an Alter Bridge song, so it’s a Tremonti song, is if it has speed metal elements to it. If the song really calls for fast double bass kicks on the drums and and that kind of thing. Alter Bridge isn’t that type of band. So that’s the only time I’ll make sure that a song goes to the solo project.

CS: You’ve stated in past interviews that you guys want to challenge yourselves and update your sound with new inspirations. The opening to “Pay No Mind” sounds electronic and different from what we expect to hear from Alter Bridge. In what new directions do you take this album, and what were the motivations that led to these new sounds?

MT: I heard a band called Gunship with a song called “Tech Noir,” and I was really inspired! I was never really a huge fan of keyboard playing in hard rock music, but when I heard that, I was like, “That could work.” Some of the original synthwave stuff like the John Carpenter-esque sound was inspiring to me and Myles. We ran with it to try and add that different element to this new record.

Stream “Pay No Mind” by Alter Bridge on Spotify:

CS: One last one for you! It looks like you have a photo of a Dimebag Darrell on the body of your guitar. Is that the case? And if so, how is it that you’re honoring Dimebag in this manner?

MT: Soon after he passed, a fan was at our show handing out Dimebag tribute stickers. I grabbed a couple of them, and I put it right there on my favorite guitar. That’s my number one guitar. Vinnie Paul approached me one time and said thank you for putting his brother on that guitar, and he’s seen it a bunch. It’s just a good tribute to a good guy. He’s a legend and a nice person, and it was a shame what happened. It’s just my little tribute to him.

Here are some pictures of Alter Bridge performing at MECU Pavilion on Sept. 22, 2019. All photos copyright and courtesy of Chris Smyth. 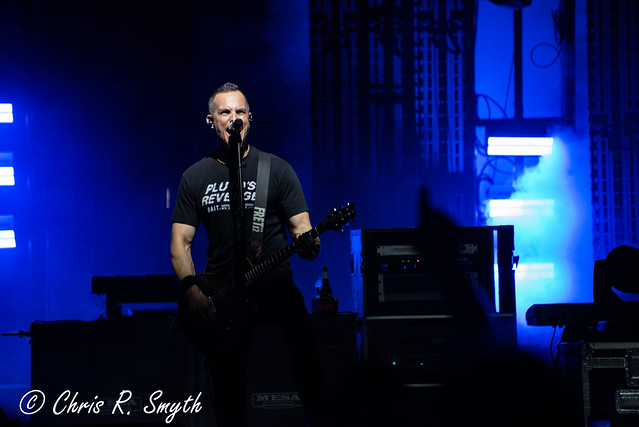 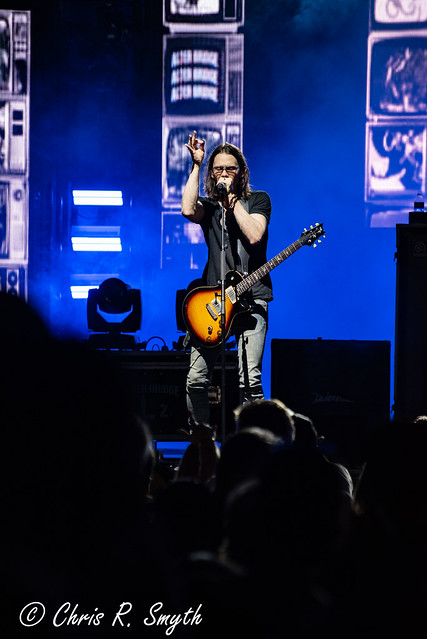 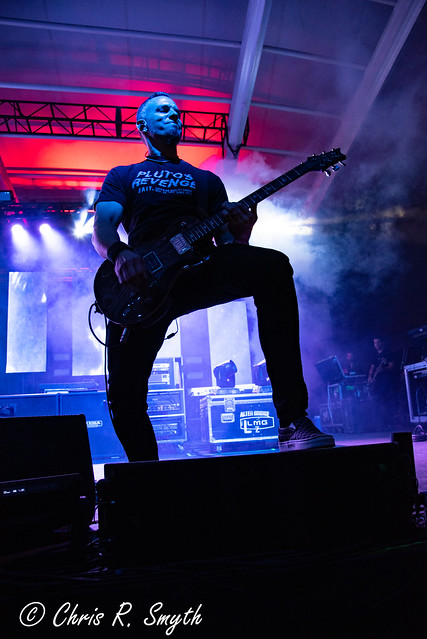 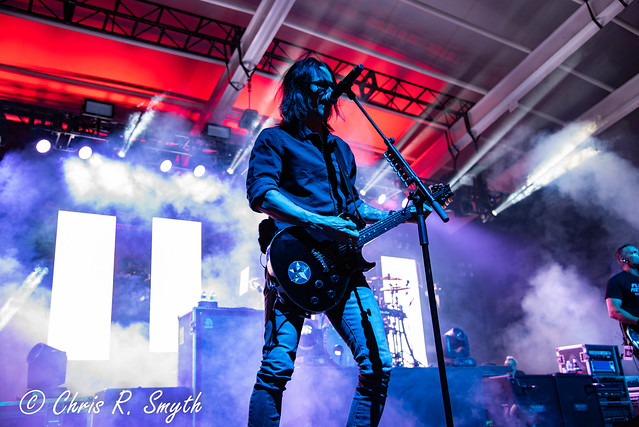 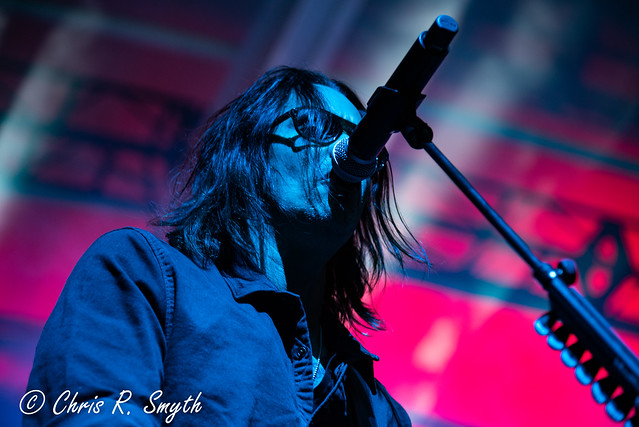 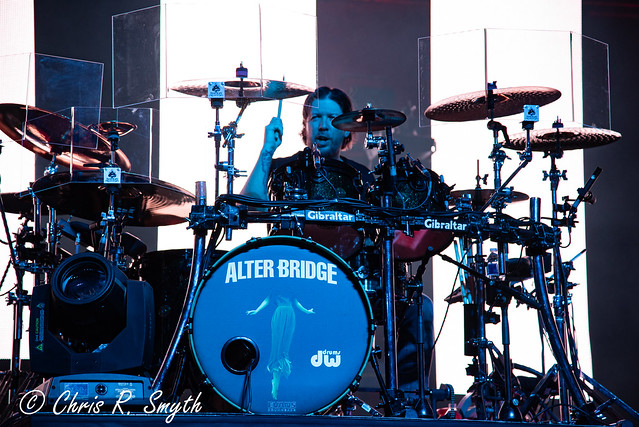 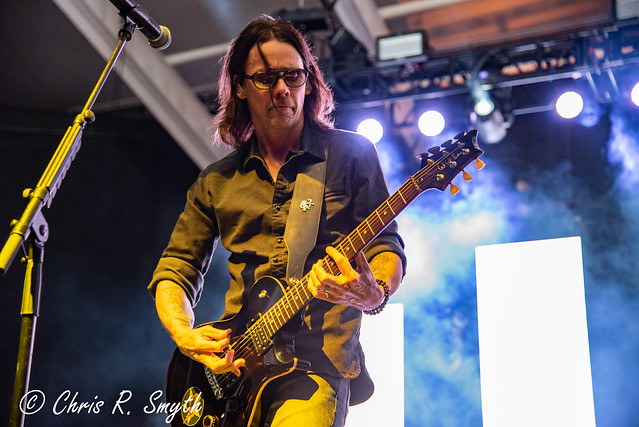 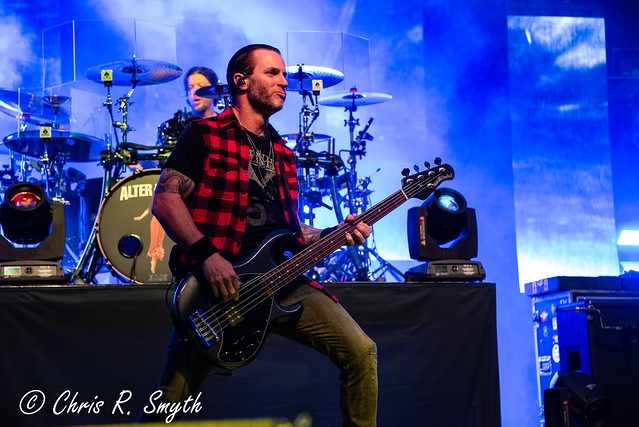 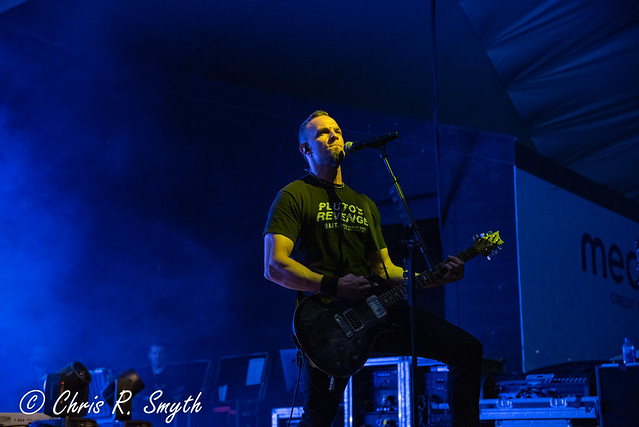 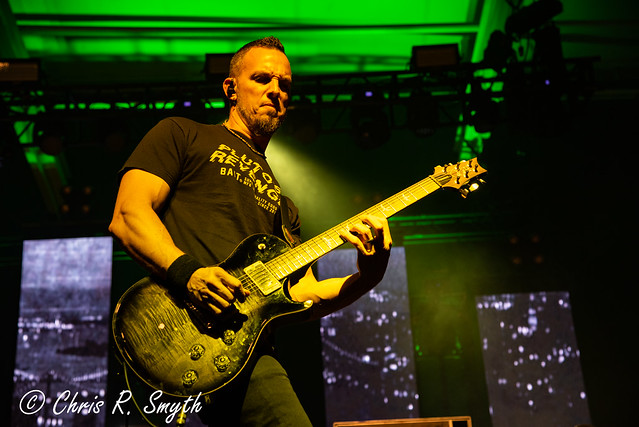 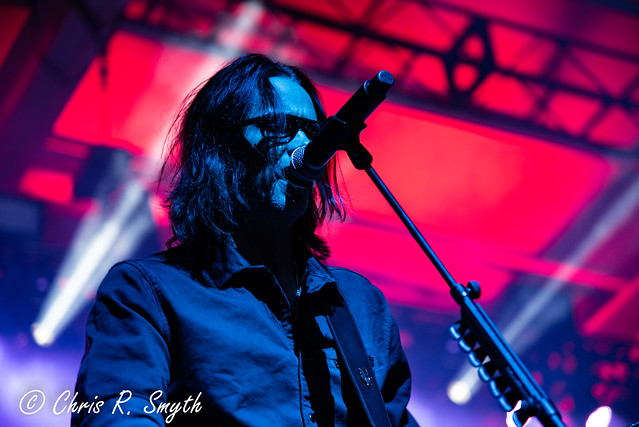 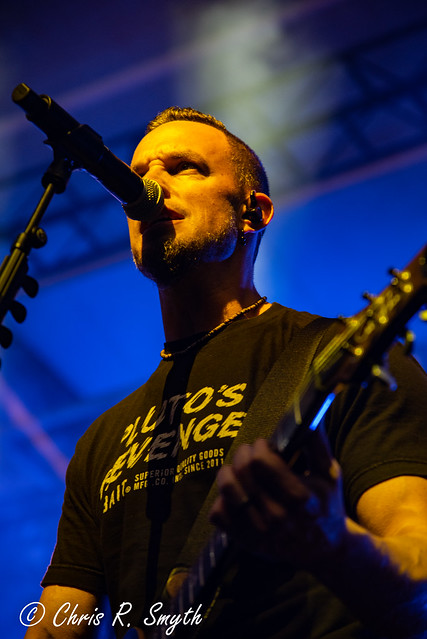 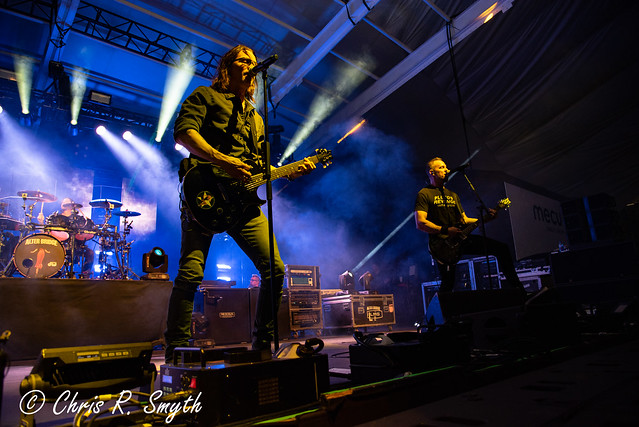 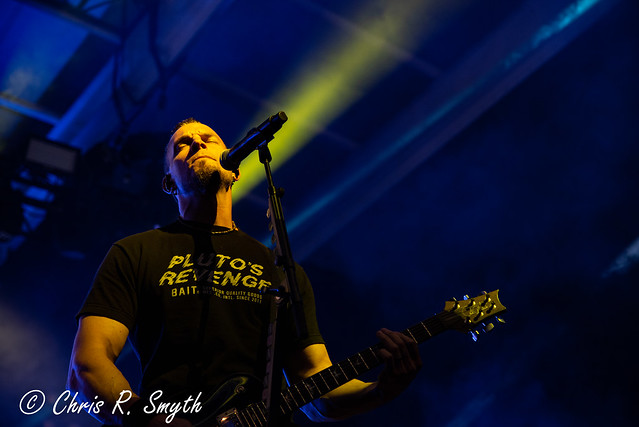 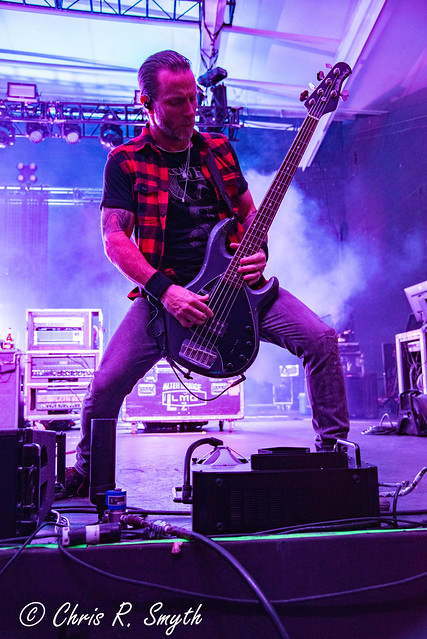 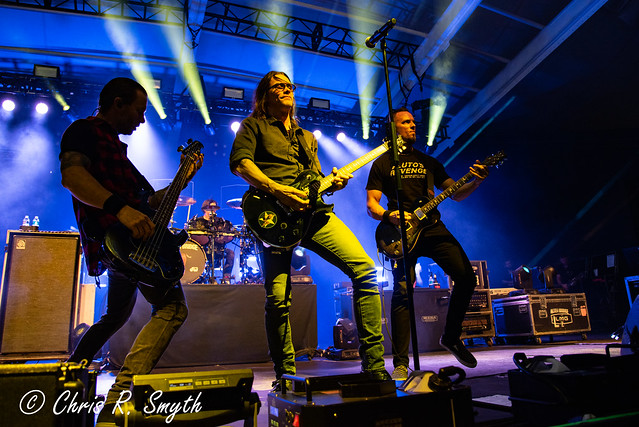 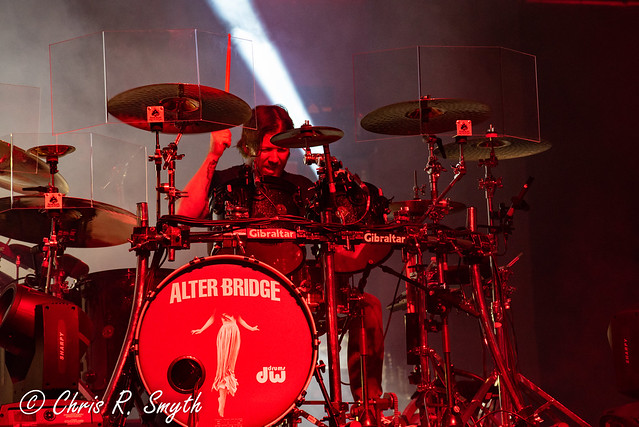 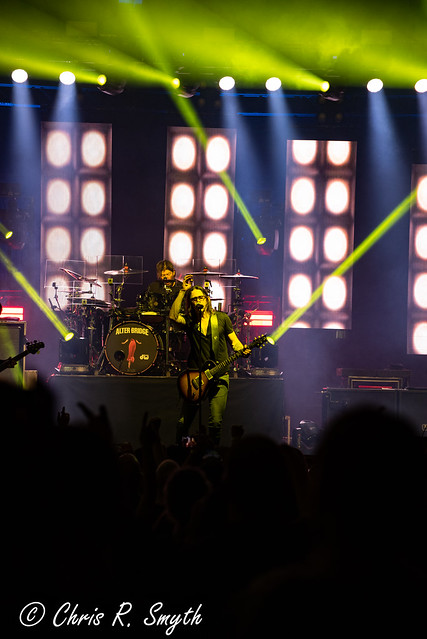 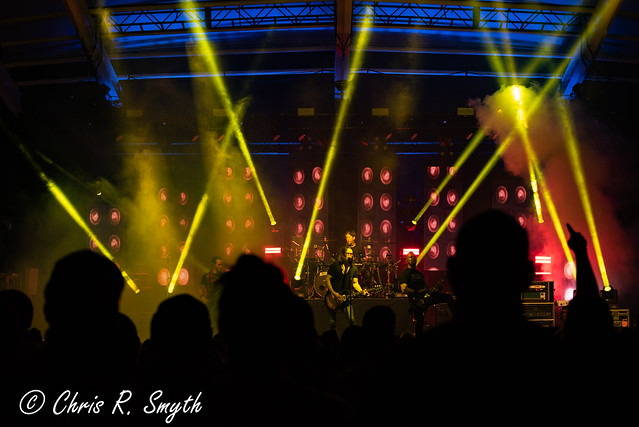 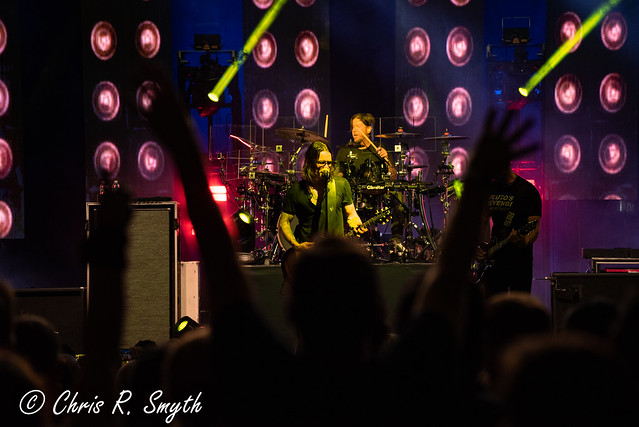 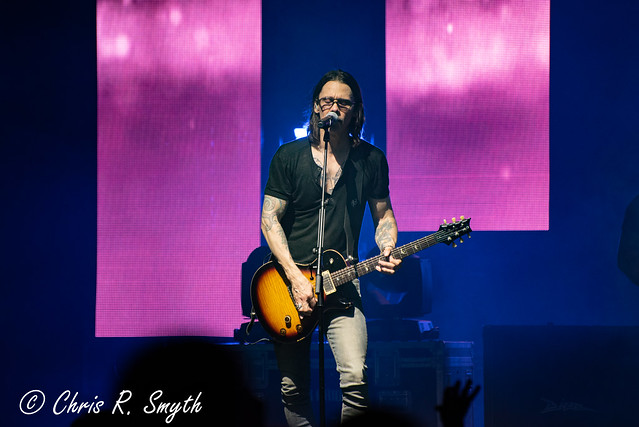