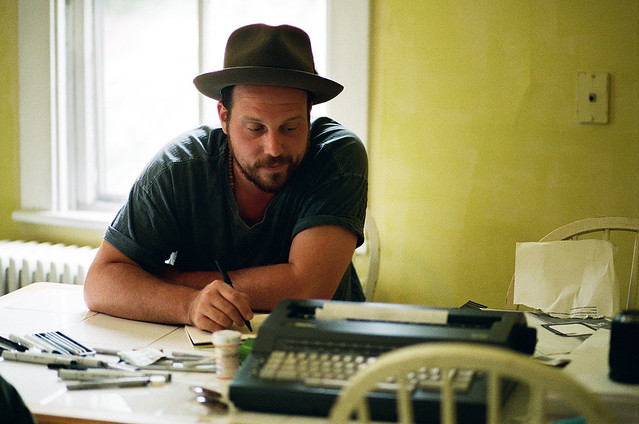 Ari Strauss: You’ve got a week of shows coming up in support of John Moreland, including one at The Birchmere in Alexandria, Virginia, on Oct.1. What can we expect to hear from the show?

Darrin Bradbury: Well, I kind of wing it every time I’m up there. I try never to have too much of the same show twice. I try to keep it very conversational — very two-way street. It’s boring to just go up there with the same shtick all the time. I’ve fallen into pitfalls with that before, so I’ve got a couple jokes I repeat here and there, but I try to keep everything off the cuff and I try to have a conversation for 45 minutes or 35 minutes — whatever time they’ve allotted me. The songs are pretty conversational, so it lends itself easily to further conversations. So, it’ll be solo acoustic, just with me and a guitar, and I’ll be playing songs, probably mostly from the new album, some from the last one, and telling stories and hopefully hearing stories.

AS: Kenneth Patengale from Milk Carton Kids produced your new album. Can you talk about how you met him and what lead to the two of you working together on this album?

DB: He came to one of my shows once, early on, about four or five years ago — he and Joey [Ryan] both. Their publicist dragged them over, and I guess said I was doing well in the clubs and, ‘You should see this kid.’ And then he and I just started getting coffees over the years, whenever he was in town and I was in town. He would give me all this really great sage advice for navigating the music world and I really appreciated it. When it came time for making another album and we were having a conversation, and it was kind of like, ‘Well, would you produce it?” and he was like, ‘Yeah, I’ll produce it.” And that’s sort of how that happened. It was born out of friendship, I guess.

AS: Jeremy Ivey was another collaborator on the album. You guys are close friends too, right?

DB: Yeah, he’s my buddy, man. I met him, oh I guess about a year a half before they penned the Third Man deal [Jeremy’s wife, Margo Price is a signed artist with Third Man Records]. I met the two of them when I was the back door guy at The 5 Spot [a legendary live music venue in East Nashville] so, I guess just through good conversations, he, Margo and I became good pals.

Together, we were sort of part of this movement that was happening at the time in music here and the songwriting world. We’ve just been kind of enamored with each other’s work for the last couple of years, and we always send what we’re working on to each other for edits and critiques and for copyright infringement of the other… and that was sort of born out of that because there was sort of a familial effort with this album. It kind of felt like all these folks who were really established were like, ‘Darrin, man, you really ought to be out there too having phone calls with people from Washington DC as you’re about to leave [to go on tour]. You really ought to have that opportunity because we believe in what you do; so, it was kind of “it takes a village” mentality to get these simple songs about tripping over your pants out to the masses.

AS: Well, it works because when your publicist Sarah Bennett sent me your album release press announcement… you know when Sarah’s firm sends out press releases, it’s rare that they’re about an artist who will be coming through DC in the near future. When I saw DC was one of your first tour dates, I jumped on it for that reason and also because most of my adult life I’ve dealt with chronic depression as well.  So, your story really resonates with me, and the older I get I feel less isolated because I find that other people are talking about it, and it’s becoming more mainstream. I really applaud your work in that direction as well.

DB: Well, thank you, man. And I’ve been overwhelmed with the support… I thought I was the only one who was depressed, but apparently the 12,000 other people who comment on Spotify beg to differ [laughter] — which is a very new and novel thing; I’m used to that number being more like 50.

I had my doubts about whether or not the album would resonate with people, but I didn’t really care because my guiding star so to speak, or my guiding light on what I work on is what it means to be… how do I put this… I shoot for accuracy. I try to write the life that I live and my perception of the world we’re living in and not that it’s right or wrong, it’s just accurate. So, I guess it was kind of a risk to be like, ‘Well, I could be trying to write songs that are a bit more commercially accessible or even emotionally accessible,’ but I felt like I kind of had to write whatever my truth of what I was living through because the challenge has been such a component of my life for so long. So, I’m really humbled that people are responding to the record the way I hoped they would because that’s the point of it — to connect.

AS: I find that there is a proportional relationship between the amount that you make yourself vulnerable and the rewards that come back from it, and I think that by putting yourself out there, there’s more love that can come back in your direction.

DB: That’s very true, and I’ve been really humbled by the reception its gotten from both listeners and critics alike. I don’t deal with the receiving of love all that well so I’m still trying to come to terms with that. But I appreciate it — in every which way I know how.

AS: I saw in a press release when you signed with Anti- Records earlier this year, your label founder Andy Kaulkin said, “Darrin possesses a wonderful, darkly sardonic sense of humor and a matter of fact wisdom that reminded me of some of my favorite writers from Chuck Berry to Mose Allison to John Prine.” That’s pretty high praise and it also covers a pretty broad cross-section of musical genres…

DB: Well, that’s Andy for ya — he wants the fruit salad to have all the fruit in it. He’s really become quite the co-conspirator… for his perspective and his willingness, man, he’s real stand up dude. You don’t hear about A&R guys and presidents of record labels being forces of artistic nature themselves.

Watch the official music video for “Breakfast” by Darrin Bradbury on YouTube:

AS: You knew, at a really young age, that you wanted to be a songwriter. So, what music were you listening to when you were a kid growing up in New Jersey and what artists were your musical influences and how did they influence your approach to songwriting?

DB: It’s not a very popular answer — I’ve been asked this question before and I must remain aligned to the truth — but when I was 7 years old, I heard Billy Joel and I was like, ‘That’s what I want to do!’ People give Billy Joel a rap, but when you really look at how that guy is able to tell a story, how concisely he tells that story…I never really was attracted to music, I was attracted to storytelling. Songwriting just seemed like it an avenue for storytelling, and when you hear that, ‘Brenda and Eddie were the popular steadies and the king and the queen of the prom,’ you’re hearing something that is as concise as Hemingway and establishes characters in two lines and a scene and a place to be. That was so magical to me that you could create a world with words.

And then, by the time I hit middle school and high school, it was just being obsessed with Bob Dylan and Paul Simon. I grew up in New Jersey, a stone’s throw from New York City. I used to take a bus and a train into Manhattan and go to the Village and just look at the record covers and buy like 2 or 3 CDs and listen to them on my Walkman on my way home. Then 9/11 happened and that was about the time all those Omaha indie bands came out, so I was a big Bright Eyes nerd for a very long time, and it was definitely the music of my college.

You know, I’ve always been fascinated with songwriters and along the way I also developed taste for your Guy Clarks and Townes Van Zants and John Prines and your Steve Goodmans and that cast of characters and that’s what eventually drew me to Nashville because I was like, ‘Wait, there’s a place you can go where life is all about the song?’ So it was an amalgamation of all those things…Randy Newman and indie rock from my college years and an obsession with Billy Joel when I was 7-10 years old—anything that told a story that brought you somewhere else was what I wanted to listen to.

AS: You’ve got a big month-long UK tour coming up soon with Jarrod Dickerson. That’s exciting. Have you played in Europe before?

DB: No, and I’m terrified of flying but I’m so excited about it — so excited that I’m willing to get on a plane. But the press we’ve gotten in the UK has been really nice, so I’m thinking it will be fun. And Jarrod and his wife inviting me to come over to open for them, they’ve been a perfect situation for me so I’m excited to go.

AS: Thank you very much for your time. I look forward to seeing you play at The Birchmere next Tuesday and meeting you in person.

Darrin Bradbury performs at The Birchmere on Tuesday, Oct. 1!