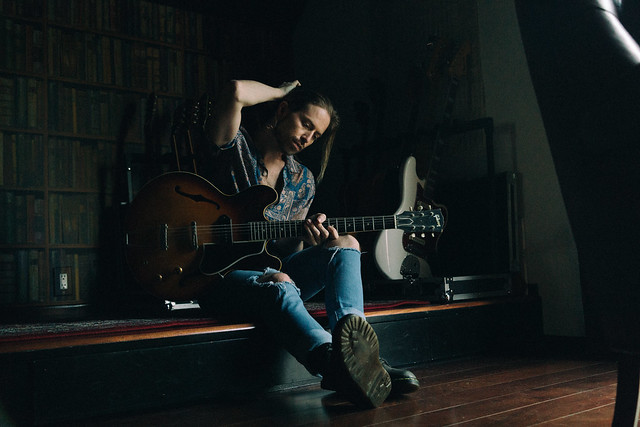 Bryce Avary, aka The Rocket Summer, released his first EP nearly two decades ago at the age of 17. Earlier this year, Bryce released his latest album Sweet Shivers, and he showed fans that he’s still going strong with no signs of stopping soon. The multi-instrumentalist Texas native stopped by DC’s waterfront at Union Stage recently in support of the latest album.

It’s safe to say the night on Sept. 24 did not go as planned for Bryce. It became clear early into the show that he was having some technical difficulties with his guitar. The problems didn’t go away and his sound guy/roadie was on the stage every few songs.

I start off describing this situation not because it defined the show. Quite the opposite actually — Bryce handled it in stride and put on an awesome performance in spite of the guitar problems. Not only was I impressed by his ability to keep performing and playing, I was even more impressed by how he handled it. His body language remained positive and he just smiled and laughed it off, joking about it with the crowd from time to time.

Stream Sweet Shivers by The Rocket Summer on Spotify:

It was clear how much joy Bryce gets from playing music and he was not going to let some guitar issues get in the way. In addition to guitar, Bryce also played piano, beat-boxed, and even hopped on a second drum set and did drum battle jam with his drummer. At one point he came into the crowd to perform an acoustic rendition of “FL, CA” from his last album Zoetic. Bryce talked to the crowd throughout the performance and even responded directly to things fans were saying to him. Possibly the best part of the show was when he started taking requests for songs and playing shortened, stripped down versions of them with just his vocals and the piano.

It was a fantastic performance. Rocket Summer is good music to listen to anytime. Bryce Avary is not just an indie rock singer, he’s an amazing musician and song writer and his music is so much more than “indie rock power pop.” I’d been waiting to see Rocket Summer again after seeing him about two or three years ago, and he did not disappoint. In fact, I would say I’m a bigger fan now then before Tuesday night’s performance.

Bryce will be touring the country over the coming weeks and I would highly recommend going to see a Rocket Summer show if you get a chance. Get details on The Rocket Summer website. I can’t wait til he comes back next time. You can check out some of his music below.