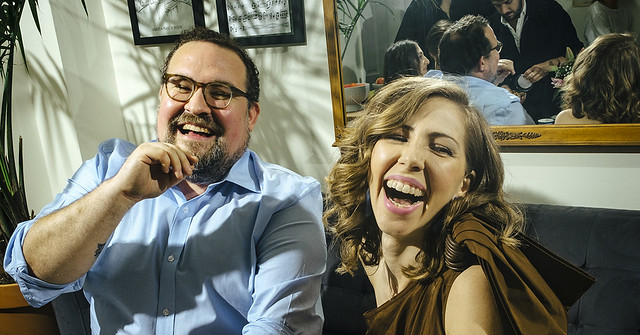 Lake Street Dive singer-songwriter Rachael Price and composer, singer, and guitarist Vilray teamed up as the duo Rachael & Vilray. Rachael & Vilray released a self-titled debut album on Nonesuch Records recently, and they perform at Sixth & I in DC on Thursday, Dec. 12.

The 12-song debut album features 10 originals by Vilray, along with two covers from the era that inspired him: Cuban composer Pedro Junco Jr.’s 1943 “Nosotros” and Milton Drake/Louis Atler’s “I Love the Way You’re Breaking My Heart,” first popularized by Peggy Lee.

“It’s a special kind of magic when two voices meet and immediately sound like they’ve never been apart,” says Chronogram. “The voices of acoustic duo Rachael & Vilray are magical enough on their own, but when they blend in song the results are utterly sublime.”

Watch the official music video for “Let’s Make Love on This Plane” by Rachael & Vilray on YouTube:

The duo first met in 2003 as students at the New England Conservatory of Music. Vilray formed a couple of bands with Rachael’s soon-to-be bandmates in Lake Street Dive, Mike Calabrese and Mike “McDuck” Olson. Even then, Rachael recalled, Vilray had a nimble mind and quick wit when it came to lyrics: “They would do random clicks on Wikipedia and when they found something interesting, they would write a song about it — say, the cold-blooded rat of Somalia. Vilray was able to take any subject and write excellent poetry about it, funny rhymes, and he would sing the songs. I thought he was so good —he could just apply himself to anything.”