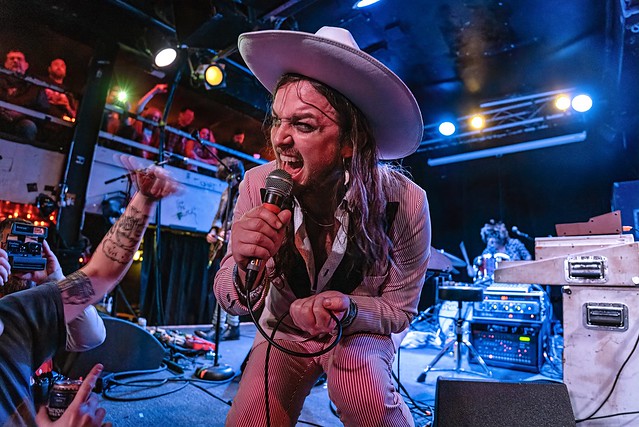 Last Spring at SXSW, J. Roddy introduced his new project, Palm Palm — mixing a bit of New York Dolls with a health dose of early Van Halen — and he brought that flare to the Ottobar in Baltimore on Sunday night to a sold-out crowd.

Opening the night was Parker Gispert of the Atlanta, Georgia-based The Whigs with a fun set of brilliant songs, including a fantastic cover the Sinatra tune, “That’s Life.” 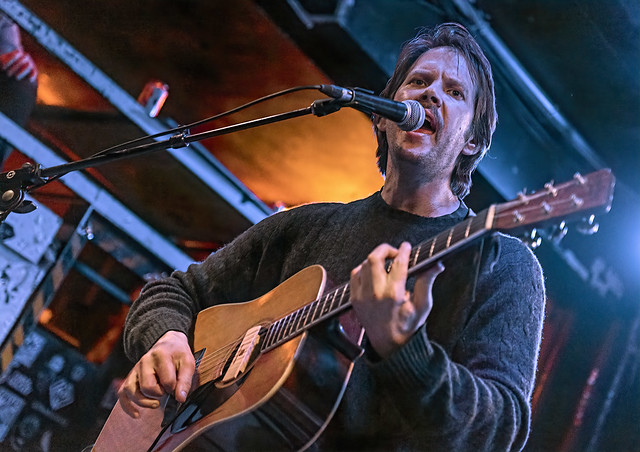 Although J. Roddy has been fronting a band known for its sweaty, high-energy shows, this new tour has been billed as “A Single Dose of Strangeness,” partly because, as he described to the crowd, he’s putting himself out there in a way he hasn’t before. In between sets of Parker Gispert and Palm Palm, J. Roddy took the stage in pink striped suit, white hat, and sunglasses behind a piano and synth rig. Armed with a slew of Business tunes, he played fan favorites like “Don’t Break the Needle” and “Take It As It Comes” — even rolling out a new song before taking requests from the audience.

Although it was so much fun to hear these tunes stripped down to their essentials, things got kicked into high gear when J. Roddy announced the rest of Palm Palm — Charlie Glenn, Jr., on guitar, Andrew Carper on bass, and Raphael Katchinoff on drums.

What followed was some heavy rockin’ as the band played glam tinged grooves with some thick David Lee Roth swagger. As J. Roddy told the audience, “You know I lived here in Baltimore and now we live in Richmond but it all started here,” before starting off on a tune he called “Juke Juke” as Walston walked out to the edge of the stage, bringing this audience some good old fashioned rock ‘n’ roll.

And things got a lot sweatier and funkier from there as I witnessed the crowd — who I’m sure hadn’t heard most if not all of these new tunes — sang along to choruses like “I’m Gonna Do It by Myself” that just begged to be sung by an eager audience. One of the coolest things is to witness the start of something special, and I’m glad we were there to see it.

J. Roddy Walston and Palm Palm continue the Single Dose of Strangeness Tour, making a stop in the District at Union Stage on Sunday, Jan. 26. It’s one not to miss. Buy your tickets online now!

For more dates and info, check out more here.

Here are a few more photos of Palm Palm performing at the Ottobar on Jan. 19, 2020. All photos copyright and courtesy of David LaMason.