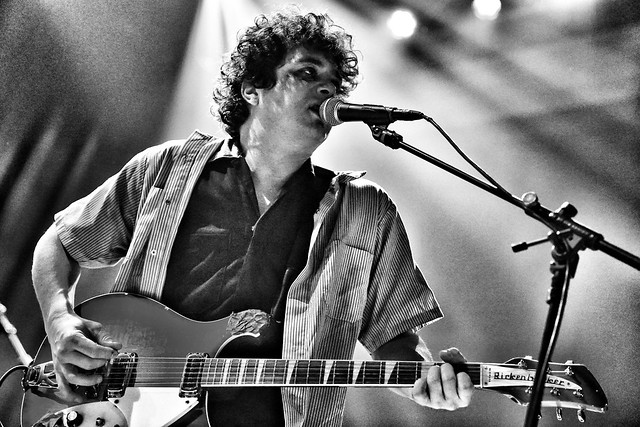 Sometimes an album comes to life when a band needs it most, and the tour to support it is how the group actually reaps the spiritual, and financial, benefits of their work.

The Districts’ latest release — You Know I’m Not Going Anywhere — is said to have almost never happened: the band had nearly exhausted itself after an intense few years on the road and seemed to be searching for direction when founder and head singer Rob Grote isolated himself and put pen to pad to nurture the words that would comprise the newest LP.

The Districts, who headlined for at least the second time at 9:30 Club on March 10, were formed in 2009 when Rob and the other original members were just high schoolers. After a couple of self-produced EPs, they released their first full-length album, Telephone, which put the band on the map.

Eventually, they signed with Fat Possum Records and, after moving to Philadelphia, released their self-titled EP and began to more intently establish themselves in the flesh and via digital platforms. They connected with Grammy-winning producer John Congleton and in 2015 cut A Flourish and a Spoil, a masterfully edge, jolting record from start to finish.

2017’s Popular Manipulations was released as The Districts ramped up national touring. When dust started to settle, and despite the band’s success in Philly and its growing following in indie circles, the members found themselves unsure of what the future would hold. At points in 2019, they weren’t sure if the band would go on.

But thanks to Grote’s determination and reinvigoration, and a newfound connection with the band members through his songwriting, the newest offering — released just days before their stop in DC — shows a group that has refreshed itself with a batch of songs that naturally moves The Districts in new musical directions.

Stream You Know I’m Not Going Anywhere by The Districts on Spotify:

On an eerily prescient recent night at 9:30 Club, and just five gigs into a 30-show tour, The Districts delivered an explosive 15-song set followed by a five-song encore, dipping into all of those four LPs and showing their sound to be as robust as ever.

Following the lead of Grote’s restless howl, the band unloaded on stage in a building that felt packed even as buzz began to swell about social distancing.

“You washing your hands out there?” Rob asked the crowd, which at the time seemed as good as anyone could do — in retrospect, it made the night more monumental in many ways for everyone in the room.

Grote has talked about his band’s music, particularly the newest release, as intending to delay or adjourn death. As the night at 9:30 Club wore on, it felt like a group effort to ward off the swirl of national paranoia and apocalyptic newsfeeds. Sure enough, the club announced the following day, along with others around town, that it was ceasing or modifying operations. In the week since, the city has closed down all concert venues.

But with the opportunity they were given, and really not knowing what was ahead for artists nationwide, Rob and his bandmates rocked 9:30 with fervor and purpose.

The band introduced itself, like it normally does, in colorful and contrasting fashion with an incredible flurry of songs, starting with “Funeral Beds,” which highlighted the wild fluctuations in texture and emotion in Rob’s voice — it shifted from soothing to abrasive in tone as this song built up in a bullrush of the bands instruments.

Bass player Connor Jacobus, professorial and focused on his strings, was a subtly fast and groovy presence who aggressively provides footing for a growingly diverse collection of songs. Meanwhile, the mysterious and unflappable Pat Cassidy sliced and wailed massive sounds from his Fender that juice many of the songs with an overpowering quality.

Braden Lawrence, perhaps the chaperone of the group, was extremely watchful, and for good reason — he’s tasked with keeping unorthodox beats and timing on songs that range vastly in speed and volume.

The newest member of the band, Breshon Martzall, with big, bright eye and his own intense focus, created a world of sound out of a Moog, a Mellotron, and more, covering a lot of the synthesized sounds on You Know I’m Not Going Anywhere.

Working through new album’s more emotive sounds, “My Only Ghost,” off the newest release, was and is in moments, a departure for the band, as it built on an acoustic, lingering progression that swelled with an ominous harmony.

“Hey Jo,” a hallucinatory alt rock waltz with ambient distortions and regretful lyrics, showed Grote exercising song to release his own frustrations and disappointment and struggles.

Met with brimming anticipation, “4th and Roebling,” the explosive opening track from A Flourish and a Spoil, saw the audience fully engaged and, perhaps, for a moment, fundamentally escaped from the outside world.

One of the band’s lesser appreciated singles, “Nighttime Girls” featured an undulating drum march, a fuzzy clap effect and surf-rock riffs that speak to wider tastes and more deliberate infusions. In this song, Grote sings about the “hole in my heart,” and demonstrated an amazing terracing to his voice amid the stressful guitar chords.

Another cut from the new album, “4th of July” revealed itself to be delicate, with a heartbreaking whistle lead that surprised and, frankly, moved the audience at 9:30 Club — an indication of the unpredictability and experimental nature of the most recent collection of songs.

Well timed, “Cheap Regrets,” the piping-hot “nihilist disco” effort from You Know I’m Not Going Anywhere, served as the rewarding cap to the lengthy set. An early candidate for one of the year’s best indie rock tracks, this track flashed with a glorious ambivalence as it mocked the current state of society and pounded with a magnetic bass line that vibrated off the venue walls.

A wild and girthy encore, the five-song return to the stage included the gargantuanly poignant “If Before I Wake,” from Popular Manipulations, as well as “Young Blood,” at this point a classic and favorite from the 2015 release, led by Rob’s guitar and the on-the-verge resonance in his words.

Bursting with misgivings, and with a gift for crafting those feelings into songs, The Districts would unfortunately be forced to cancel their ambitious tour only two days after the DC visit. If it’s any form of consolation, their performance at 9:30 Club seemed to consecrate a band that is truly coming into its own and, if fate will allow it, has so much more to offer.

Here are some pictures of The Districts performing at 9:30 Club on March 10, 2020. All photos copyright and courtesy of Casey Vock. 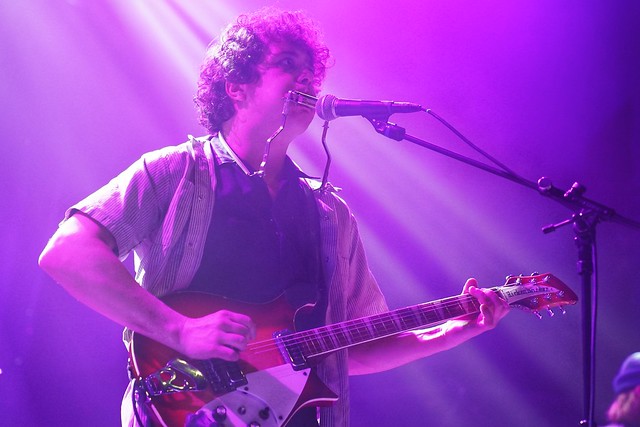 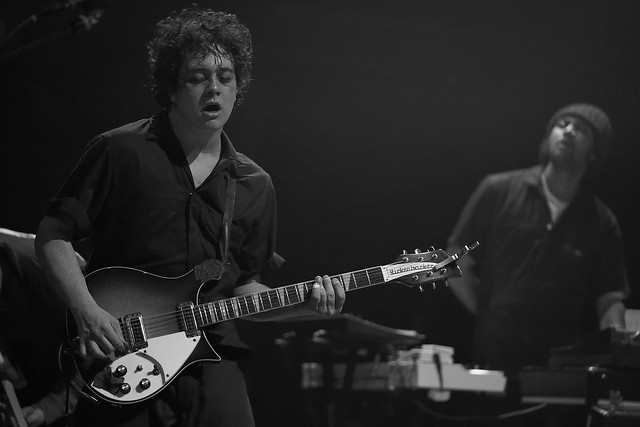 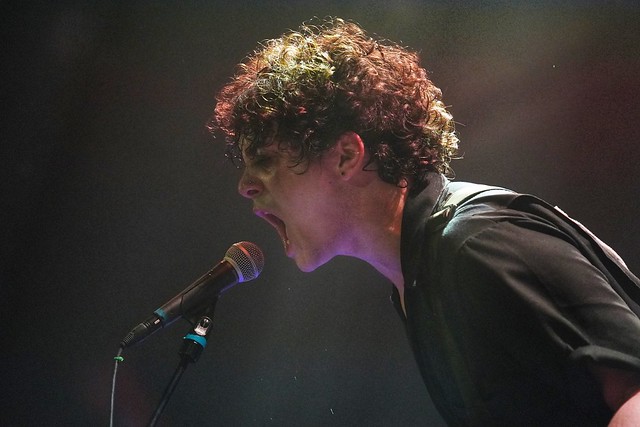 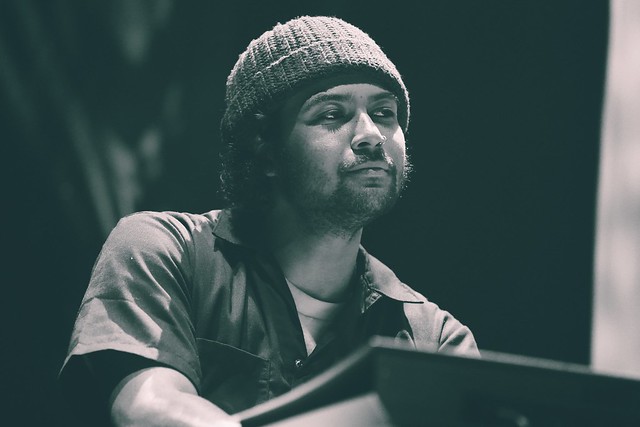 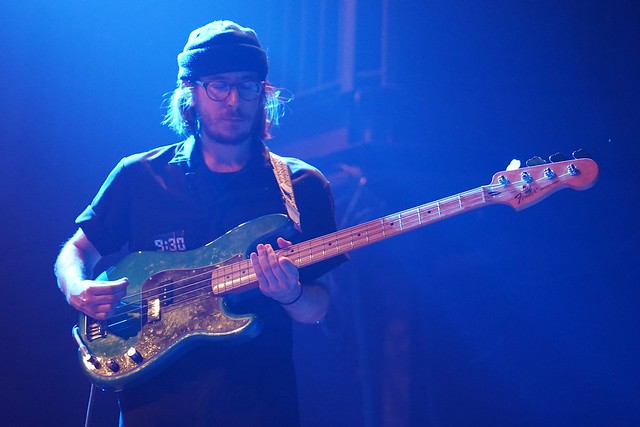 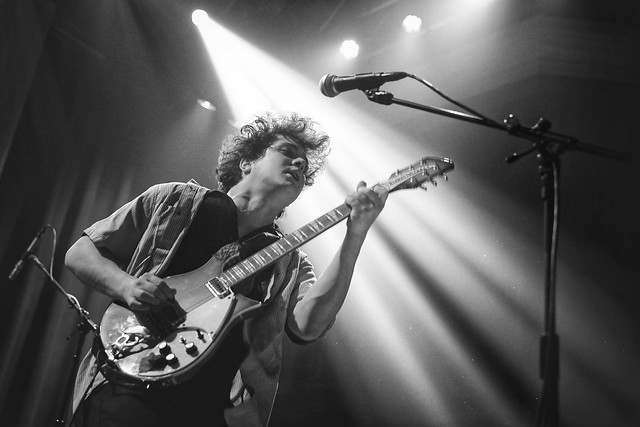 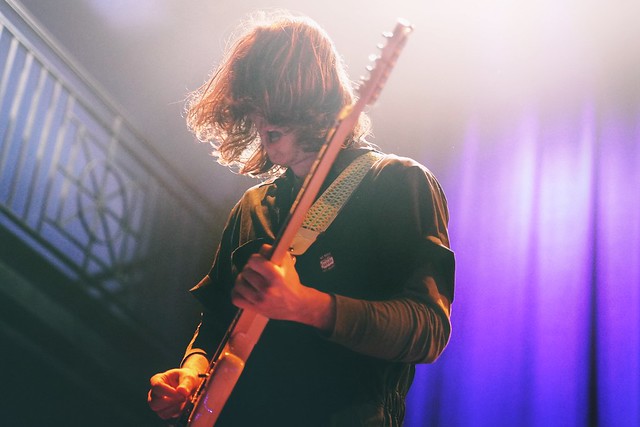 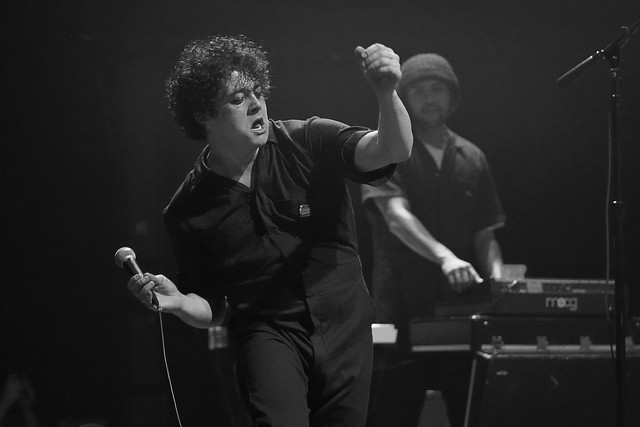 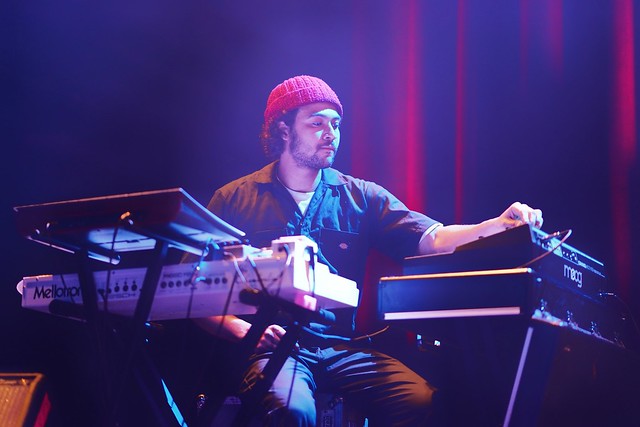 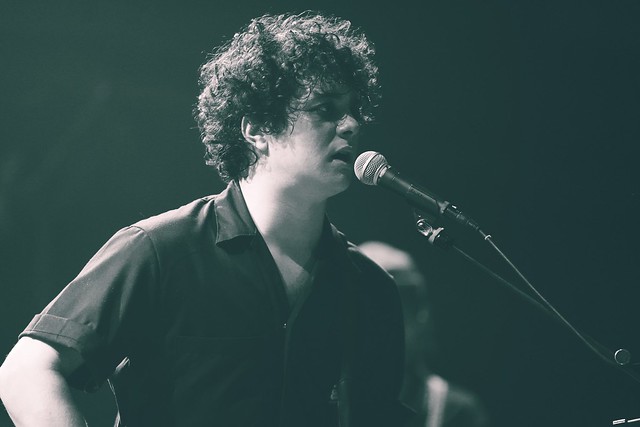 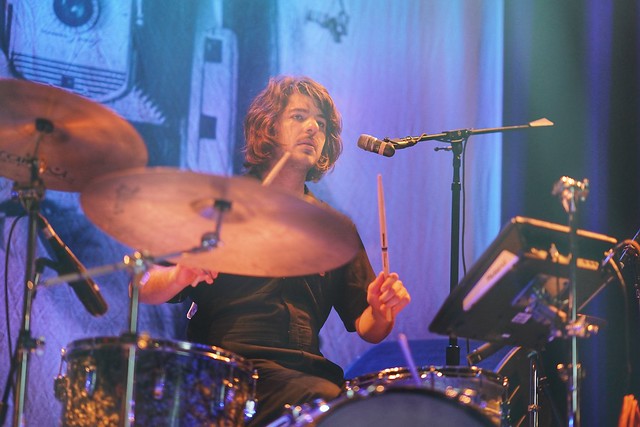 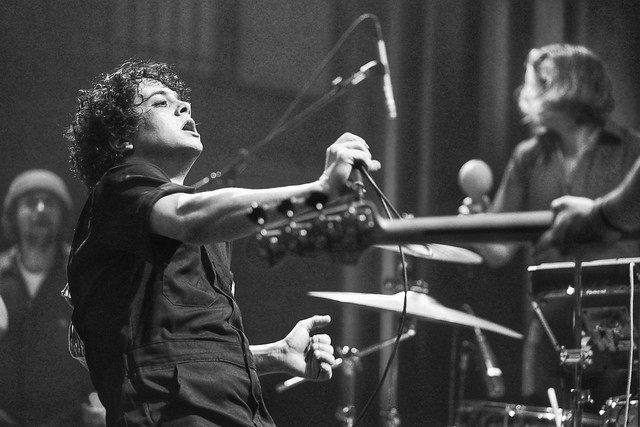 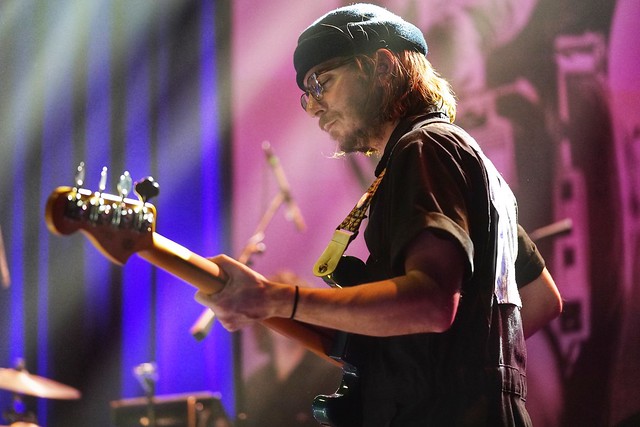 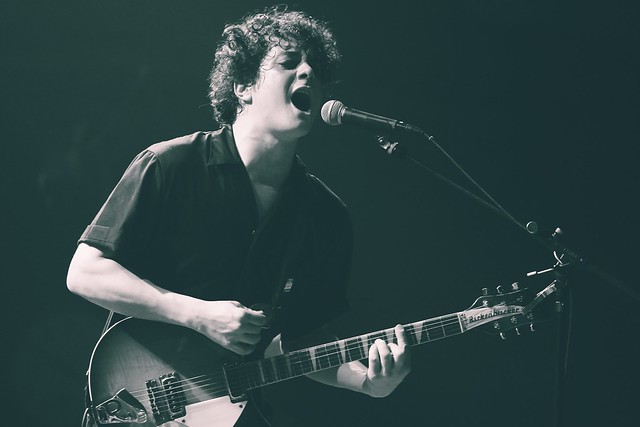 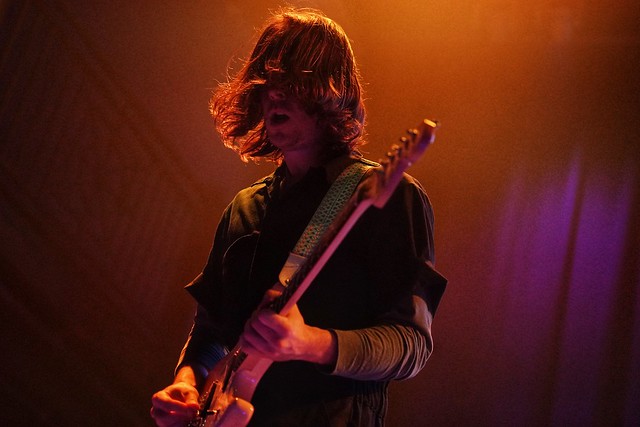 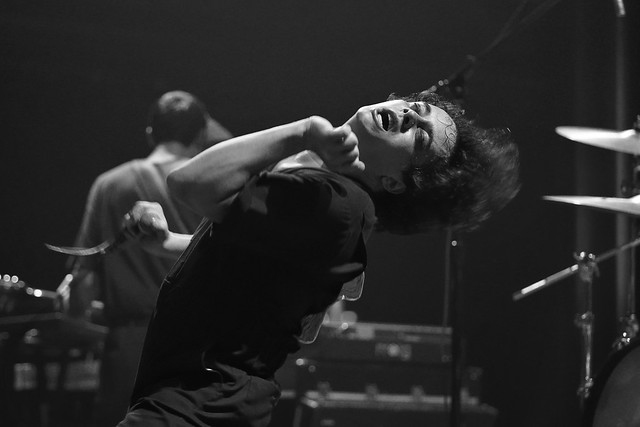 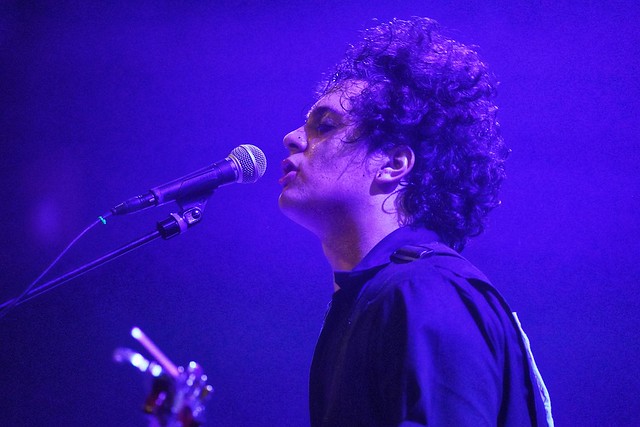 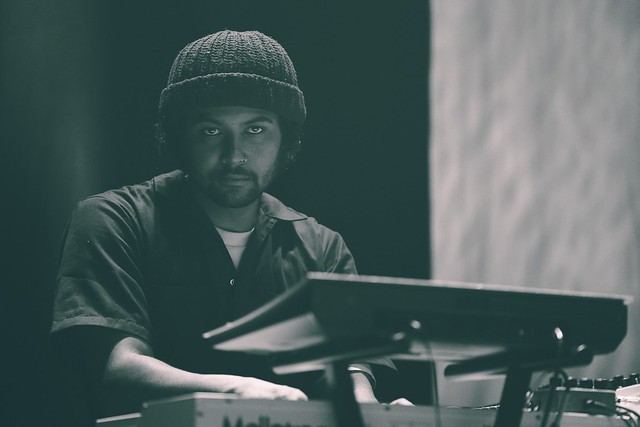 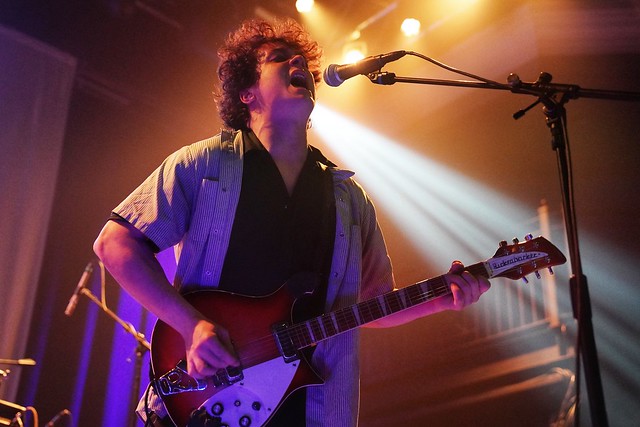 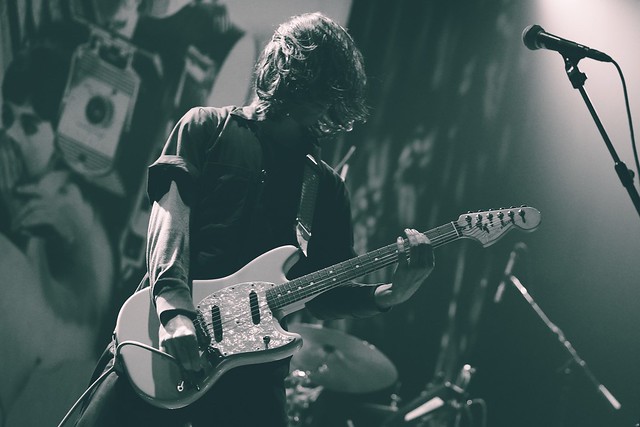 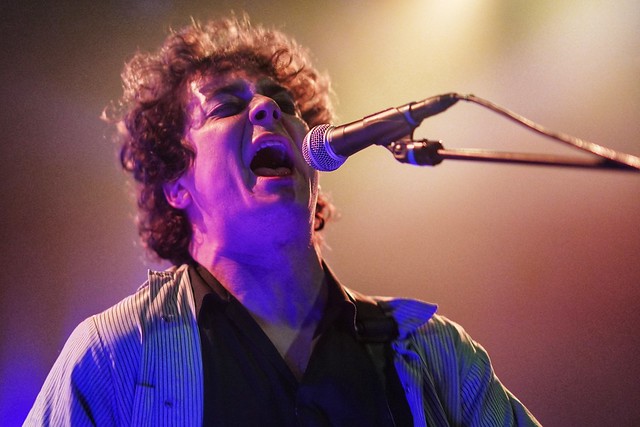 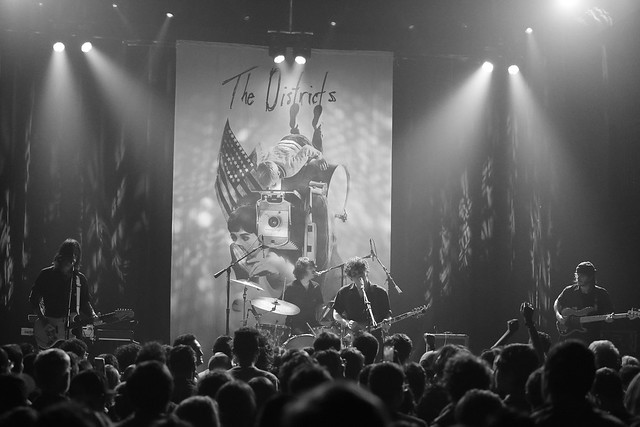 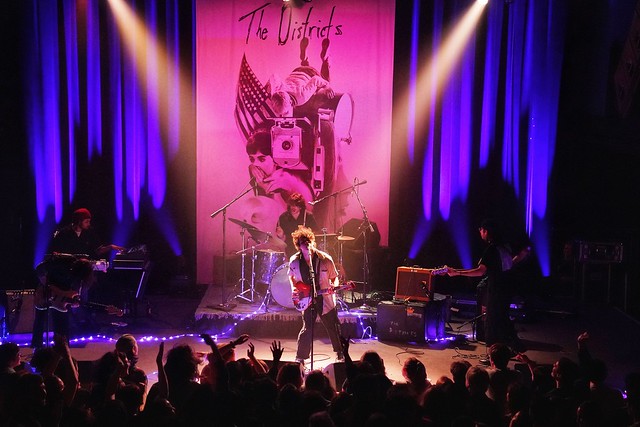 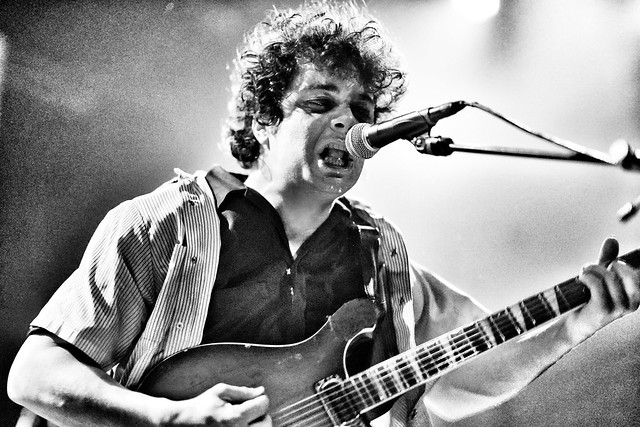