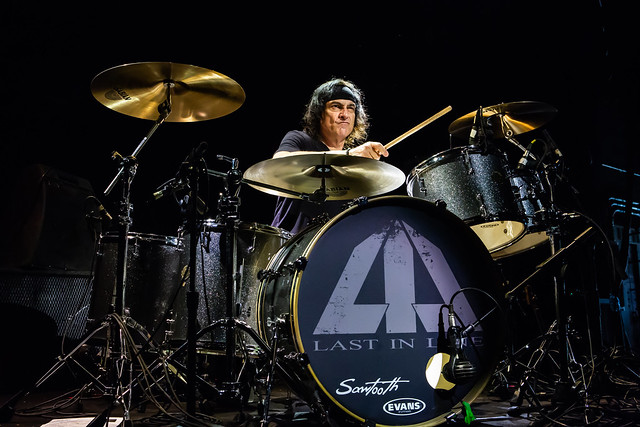 Saturday, May 16, marked the 10th anniversary of the death of legendary singer Ronnie James Dio from cancer. Tributes poured out across the internet from his contemporaries like Rob Halford and artists he influenced such as Lzzy Hale and Scott Ian to his former bandmates in Black Sabbath.

Vinny Appice, the drummer for Ronnie James Dio in both Black Sabbath and Dio, along with his older brother Carmine, took their tribute a step further and released “Monsters & Heroes,” a tribute video honoring their departed band mate and friend.

Earlier this week, Vinny Appice spoke with Parklife DC’s Chris Smyth about why the brothers decided to make the tribute video and his memories of Dio.

(This interview has been edited for length and clarity)

Chris Smyth: First and foremost, how are you holding up during this time? How are you staying busy?

Vinny Appice: I actually have a lot of sessions to do. I have a studio in my house, so I’m doing a lot of that. I’m doing a couple of lessons each week with a couple of students. So I’ve just been really busy, which is great. And then we’re working on the Last in Line album. My band Last in Line is finishing up a third album. So, everything’s good.

CS: That’s good to hear, and I definitely want to get back to talking about Last in Line, but why don’t we dive into why we’re talking, and your tribute video for Ronnie James Dio that just came out Saturday. When did this first idea come about? When did you want to start making a tribute video for him?

VA: I saw all these videos that were coming out on the internet. You know, the virus videos like the Brady Bunch with all the windows and everybody in a different location. So I thought that was really cool, and I thought that it’d be really cool if we did one, Carmine and I. And then I thought Ronnie’s anniversary is coming up, and we have a song called “Monsters & Heroes” that we recorded on our album that we did a couple years ago; about two, three years ago we did an album together, and the song is about Ronnie.

So put two and two together, hey why don’t we do a video and release it on the anniversary? But that’s how it came about. I talked to Carmine and he liked the idea. So, we put it together. And the band that you see in the video is the band that we use live. We do a drum show, not a drum show but a live show with that band. We play a lot of music from our history, so that’s the band we use live so we are real tight. And the guitar player, Artie Dillon, is great with video and editing and producing the thing.

So it was easy to do. And we all have places to record at home. Except for Carmine, he had to use an iPhone. He used an iPhone and he got pretty good sound with it, it’s amazing. So that’s how it came about. We put it together and gave it to Artie and worked on the mix a little bit, and he did the editing and it came out better than we thought it ever would come out. It was really, really good. The sound is good, so we’re really happy with it and proud of it. It was nice to be able to do something special on Ronnie’s tenth anniversary.

Watch “Monsters & Heroes” by Carmine and Vinny Appice on YouTube:

CS: In the making of this, it’s now been 10 years since Ronnie’s passing. Did this bring back any special emotions or any thoughts of Ronnie as you were going through it that you’d like to share?

VA: Well, just like when anybody you know passes away there are certain days that you think of them, and that day was the anniversary, so yeah you start thinking of him a little bit more, and we had some great times together. And we all miss him, I miss him, everybody misses him. But what can we do? Keep the music going. That’s probably the best thing that we can do.

CS: This past weekend, you basically couldn’t look at any rock or metal sites without seeing some sort of remembrance of Ronnie about it being his tenth anniversary. What I found very interesting was that not only everyone who has looked up to him and learned from him, but a lot of his contemporaries spoke so highly of him and talked about how much they learned from Ronnie. Was that apparent at the time? Did you know that he was passing on so much even to those who were is contemporaries?

VA: Yeah, he knew that he influenced a lot of singers, and a lot of music and bands. But you don’t think about that kind of stuff. You just do what we do, and that’s it. But he was great influence. He was such a great singer. Many people were very influenced with his approach and some people tried to sound like him. But as far as him knowing, yeah, he probably knew. So many people would come up and go “Hey, Ronnie! If it wasn’t for you…” So, all music influences people and he did it with his amazing vocals and his voice.

Watch the official music video for “Landslide” by Last in Line on YouTube:

CS: I’d like to turn toward Last in Line now. You mentioned that you guys are finishing your third album. Obviously, this time frame has changed everything. When can we expect that album and how is that all going right now?

VA: We got almost half of it done, and then this thing hit and it slowed everything down. So now we are in the process of picking up what we started, and finishing the six songs that we have. And we have a lot of ideas in the can and we’ll probably get together very soon and start hashing those ideas out and building some songs and writing some songs with that stuff. We hope to get it out in the beginning of next year, I would say. It’s just a matter of finishing up these songs, so hopefully next year we’ll have it out. And when we can tour again, now our dates have been pushed back all the way to December.

CS: So I was going to flow into that. You were supposed to play a show here in the DC, Baltimore region. I think it was first scheduled for March, and then it was scheduled for June, and now I don’t think it’s even scheduled. So, is the plan once you’re given the go ahead to get back out on the road are you guys going to try and get back out there? Or are you going to wait and see how things move?

VA: No, right now all the gigs are for end of November, December. And if they say it’s a go, it’s a go! We’re gonna do it. But let’s see what happens. But hopefully it’s starting to lighten up a little bit and we can get music going again. That would be a great thing. I think everybody could use a little music these days.

CS: Yes, everybody certainly could. I got one more question for you. This year there was an announcement of a Dio documentary that is in the works. Are you involved in that in any way? And if so, what is your involvement?

VA: It’s actually Wendy’s (Ronnie’s widow) project. They came to my house a while ago and they interviewed me, and asked questions and told stories. It was a really, really good interview. It looks like this is going to be a really nice tribute to Ronnie as well. That’s the only involvement I have, I’m just going to be in the video. And from what I hear they got a lot of people. Famous people too. So that right there is going to make it really cool. I don’t know when it’s coming out, but it looks like it’s going to be a good one.

Watch Vinny Appice demonstrate how to play “The Last in Line” by Dio on YouTube:

CS: So I’ll just let you go with this. It’s been ten years since his passing. There was all of the tributes that went out, people are still excited to hear his music. With the documentary I’m sure people are excited for that to be released. How does it feel to know that you were involved with him, and things that you worked on together, that still this many years later people are still very interested in, and want to hear and cherish more?

VA: Well, that’s the amazing thing. His songs are like 1983. Even before that The Mob Rules came out in 1981 with Sabbath. And that’s almost 40 years old, it’s 39 years old and people are still buying those records and listening to them. And I go out and play that stuff. I do a show that’s all Black Sabbath with a band. And it goes over so well, and you go man, this is so old and it’s still popular! It’s crazy. It’s timeless. I guess it’s so classic that people want to hear it. The album Holy Diver is a pretty classic album and so is The Mob Rules, so I was fortunate to be involved in those kinds of records.

CS: Vinny, that is all that I’ve got for you unless there is one last thing that you want to mention about Ronnie or if there is something that I missed that you feel you’d like to get across?

VA: Ronnie loved his music and loved his fans very much, and I tell everyone this, he always remembered your name. It’s kind of like the Cheers bar where everyone knows your name. Ronnie remembered everybody’s name. It was incredible. But we all miss him, and hopefully the things we are doing keep his name and soul and heart alive, and his music mainly.

Thanks to Vinny Appice for the interview and remembrances!