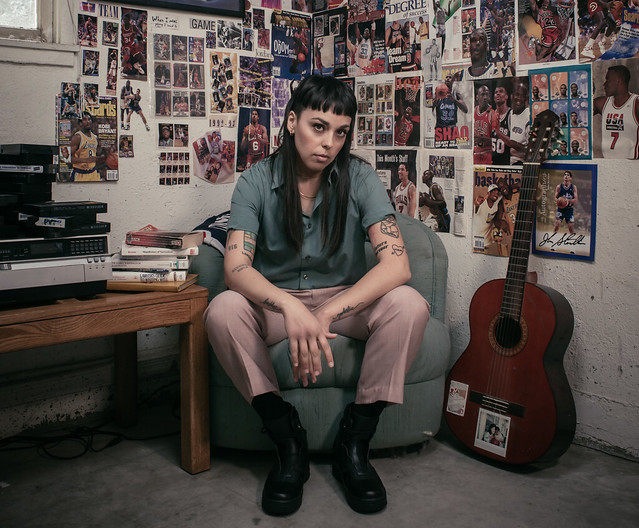 Rituals of Mine (Photo by Jeffrey LaTour)

Rituals of Mine — the immersive, hybrid R&B electronic project of Los Angeles-based songwriter Terra Lopez — announces her new album, HYPE NOSTALGIA, out Sept. 25 on Carpark Records, and shares the lead single/video, “Come Around Me.”

Amidst the dark synths, future R&B undertones, propulsive bass, and moody lyrics, the softness of Terra’s vocals elicits a quiet confidence. On the self-assured lead single “Come Around Me,” the most straightforward song Terra has ever written, she confronts being taken advantage of as a gay woman of color in the music industry. “None of this fake shit when you come around me,” she sings breathlessly.

For the accompanying video directed by Leo Pfeifer, Terra says, “Our aim was to take themes from the record and incorporate them in various ways: the rain (representing loss/grief), the trophies room (representing the overachiever in me), the TV room (representing memory and nostalgia) and me in quarantine now (representing current day reality). For obvious reasons, nostalgia is the central theme of this record as I am writing from an era of pre-loss and pre-grief so we wanted to bring in some surreal elements into each setting to elevate the story and make it interesting.”

Watch the official music video for “Come Around Me” by Rituals of Mine on YouTube:

HYPE NOSTALGIA follows 2019’s SLEEPER HOLD EP, which was filled with emotional intensity and self-reflective songwriting, confronting the emotional rollercoaster that came with the death of her father and later, her best friend.

On HYPE NOSTALGIA, Terra didn’t want to solely focus on the heaviness of her life. Instead, she opted to create an album written from a pre-loss perspective. There are dark moments and devastation throughout, but what largely transpires is Lopez’s ability to reconcile with her emotional trauma by reimagining her past in a way that isn’t shrouded in total darkness, but glimmers of light and hope.