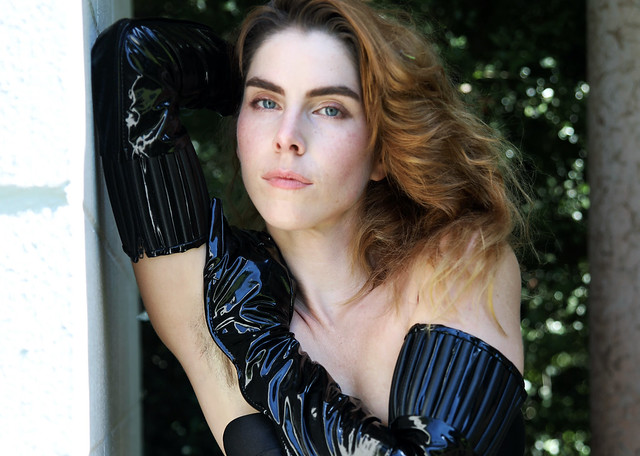 Ziemba — project of songwriter René Kladzyk — releases a new single/video, “Harbor Me, from her forthcoming album, True Romantic, out Sept. 25 on Sister Polygon. Following lead singles “True Romantic” and “If I’m Being Honest,” synth-heavy “Harbor Me” was written and demoed while docked on the S.S. Vallejo, a haunted ferry in Sausalito, California. where, Timothy Leary, Alan Watts, and Allen Ginsberg used to host their “Houseboat Summit.”

The accompanying single-take video was filmed in downtown El Paso, just a few blocks from the Mexican border. It features Kladzyk and dancer Pablo Delgadillo-Espinoza, dancing throughout the night in empty streets.

“Vocals and nearly all synths were recorded on the boat, that first day that I wrote it,” René said. “This song took me by surprise, it has an energy to it that I don’t entirely understand, and it doesn’t fully feel like it came from me. I guess that’s why I feel tempted to credit the boat itself as a co-author. I wanted the music video to have that same immediacy and visceral presence that the song has. It was exciting and fun and a little scary at times, dancing through the streets at night. We rehearsed over the course of two evenings until we got it right. I think ‘exciting, fun, a little scary’ is how I’d hope this song would be described, or at least is how I perceive it, so the video is fitting.”

Watch the official music video for “Harbor Me” by Ziemba on YouTube:

Following 2019’s ARDIS, a multisensory science fiction adventure, True Romantic is a radical shift in that it’s only one thing: a record. For True Romantic, Kladzyk’s vocal-and-piano driven songs were brought to life in the studio, her first time credited as a producer on every track. She worked with two different groups — one in NYC and one in DC — who hail from vastly different corners of the music world: co-producer Don Godwin (Too Free, Gauche, Clear Channel), and contributors including guitarist Mike Haldeman (Moses Sumney, Altopalo) and saxophonist Jeff Tobias (Sunwatchers, Thee Reps, Modern Nature), producer/synthesist Kiri Stensby (Eartheater), and many others.