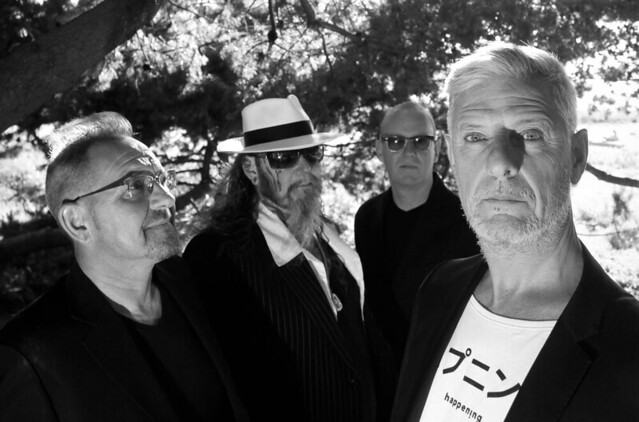 After having to recently cancel its summer North American 40th anniversary tour — a run that was to also feature a front-to-back performance of its breakthrough 1982 album After the Snow — legendary British band Modern English provides fans with a broadcast performance of the entire album from the Indigo at The 02 on Friday, Sept. 25 at 8:30pm ET in a show specially designated for North America!

Filming at Indigo at the O2, London and partnering with LiveHereNow, a fully-independent, specialist live music production company, Modern English delivers a live show with state-of-the-art sound, lights and production. Also included are projections and Vaughan Oliver artwork designs woven into the performance.

Modern English frontman Robbie Grey said about the upcoming event: “It was a real kick in the teeth when we couldn’t go out and play ‘After the Snow’ in its entirety this year for the very first time. So now with this one-off live performance, we get to do that for a global audience. We have added atmospheric lighting that will be incorporated into the event featuring artwork from Vaughan Oliver. So it will be a special night for us.”

Watch a trailer for After the Snow Live from the Indigo at The O2 on YouTube:

Watch Modern English perform “I Melt With You” while in quarantine from their homes in June:

On 1982’s After the Snow, produced by the acclaimed Hugh Jones, Modern English’s sound evolved from the dark, moody and challenging post-punk found on its debut, Mesh & Lace, to a more commercial and radio friendly mix of synthesizers, guitars, catchy drumbeats and singer Robbie Grey’s unmistakable vocals. As the title suggests, the icy sound featured on Mesh & Lace melted away on After the Snow to reveal more concise and potent songs, highlighted by “I Melt With You” which brought the band up from the underground to the mainstream.