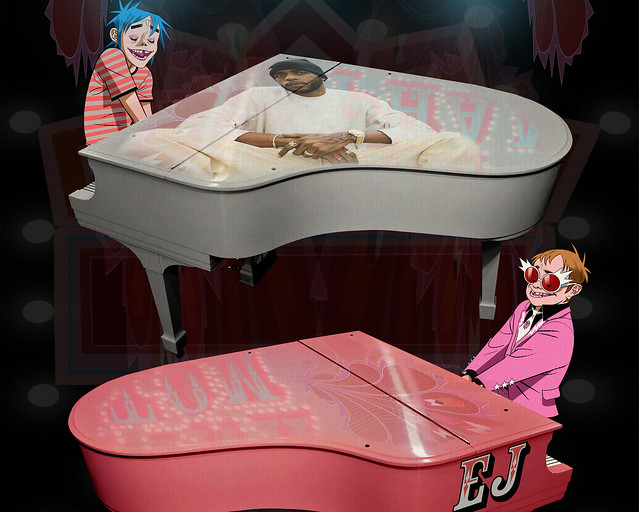 “The Pink Phantom” featuring Elton John and 6LACK is the latest episode of Song Machine and sees Gorillaz joined by a unique combination of talent in the one and only Elton John — as you have never seen him before! — and GRAMMY-nominated Atlanta rapper 6LACK.

Elton John said of the collaboration: “Damon reached out and asked me to do something and the way the song has turned out is just great. I was in the studio in London and he was at the other end in Devon, but even remotely it was such an engaging and creative process. I’ve always loved Damon because he encompasses so many different sorts of music. He has his fingers in so many pies and although he’s achieved so much, he never sits still creatively. He’s constantly pushing forward and embracing the new, which is admirable and rare. He’s always working – he’s always doing something. He’s done so much to promote music from around the world, from Africa, from China, that people hadn’t previously heard and I really admire that. I’ve always been a Gorillaz fan anyway, so when he asked me to do a Gorillaz track — it was a no brainer. I’m so very, very happy that that’s come about.”

Gorillaz frontman 2D added: “Thank you for being so generous to us, Mr Elton Sir John, with your time and genius and also those Danish pastries you brought and for making some of the best tunes of all time.”

Watch the official music video for “The Pink Phantom” by Gorillaz featuring Elton John and 6LACK on YouTube:

Gorillaz are once again disrupting the paradigm and breaking convention in their round the back door fashion with Song Machine, the newest concept from one of the most inventive bands around. Song Machine will see Gorillaz joined by an exciting and ever-evolving roster of as yet unannounced collaborators captured live in Kong Studios alongside the world’s most successful virtual band. The cameras are rolling 24/7, the fourth wall is broken, the kettle is on, the chaos is real, the door is open… What’s coming next? Stay tuned.

Song Machine: Season One – Strange Timez is out on Oct. 23 with physical releases on standard CD, vinyl and cassette; plus the 17-track Deluxe and Super Deluxe box sets. Not forgetting the bulging full-colour, one-of-a-kind 210-page Almanac, the very first annual from Gorillaz.