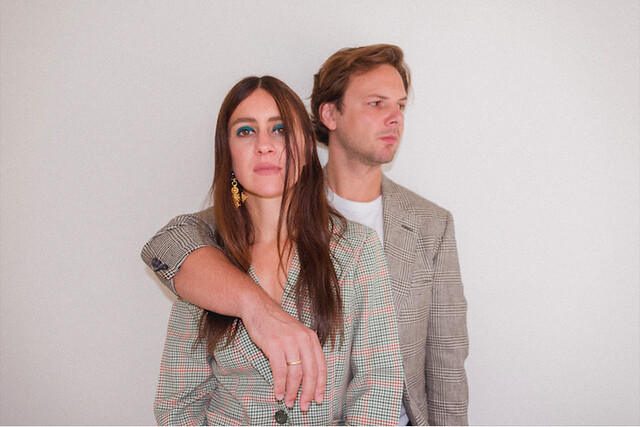 Critically acclaimed duo HAERTS, consisting of Nini Fabi and Benny Gebert, have returned to add a new chapter to their lifelong creative and romantic partnership with the release of their new single “For the Sky” featuring Ed Droste out today on Rix Records / The Orchard & Humming Records.

The music video “For the Sky” has been directed by their longtime collaborator Julian Klincewicz (Beyoncé, Kanye, Virgil Abloh, etc.) and features a gorgeous, pregnant Nini.

Nini elaborated: “’For the Sky’ came from a dream I had when I first found out that I was pregnant, which was the catalyst and beginning of writing the new music. When we finished the demo for the song I kept hearing Ed’s voice and just thought he would sound amazing on it. We didn’t know him at the time but were such fans. When we reached out, we honestly thought we’d never hear from him. But we did and we went into the studio in LA, and ended up recording it just singing together in a room. Now that feels like such a nostalgic notion. But even then it was special. It was that feeling you get when you sing with somebody and something just clicks. And it’s especially crazy when you sing with a vocal force as Ed. I wish everybody could sing together more and feel that.

“A few months later, we decided that we wanted to do a music video a week before I ended up giving birth. So it all came full circle when Julian came to NY and filmed me dancing at nine months pregnant.”

Watch the official music video for “For the Sky” by HAERTS featuring Ed Droste on YouTube:

Formed in the fires of high school romance in Munich, Germany, HAERTS has evolved as Nini and Benny have evolved — first through Berklee School of Music in Boston, then through the creative crucible of Brooklyn, NY, and their self titled major label debut album in 2014, followed by an expansion to the serene woods of upstate New York and the release of their second full-length album “New Compassion” in 2018.

Now Nini and Benny are evolving again, not only embracing their international roots by splitting their time between Berlin and New York, but also by a renewed spirit of collaboration, whether it be with other musicians they admire like Ed Droste (Grizzly Bear) or visual artists like Julian Klincewicz (Beyonce, Kanye West, Virgil Abloh) who directed the video to “For the Sky.”