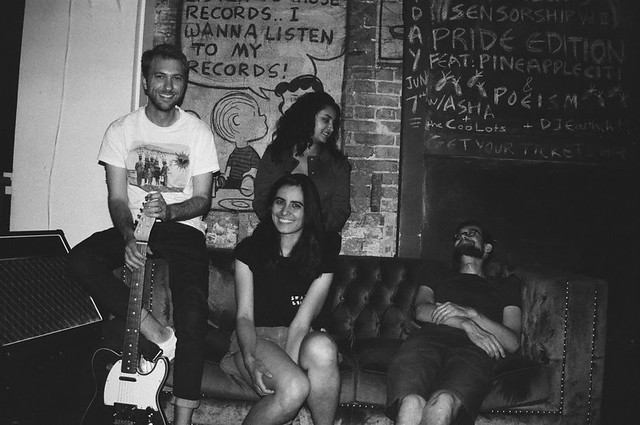 A killer new band out of DC, Rosie Cima & What She Dreamed, fronted by Rosie Cima, will release their new album Realm of the Warring Gods on March 12 via This Could Go Boom!

The single explores not just experiencing pain, but sitting with it and working through it. According to Rosie, “This song is about knowing you absolutely need to let go of someone, but pining for them anyway. I wrote this in the weeks after my first tour as a singer-songwriter. It wasn’t the first song I’d written that made me wish I had a band, but it was the best so far and whenever I played it, I ached.”

Stream “Stuck” by Rosie Cima & What She Dreamed on YouTube:

A data journalist by trade, Rosie Cima collects facts, overheard stories, memories, and the truth at the heart of interactions and meticulously collages them into a big picture view. A thoughtful, well-read and intellectual songwriter, Rosie is inspired as much by former poet laureate Robert Hass, as well as contemporaries like Big Thief and Hop Along.

Now signed to the inspiring new DC-based nonprofit label This Could Go Boom! who releases music from gender-diverse artists, the lineup for Rosie Cima & What She Dreamed consists of Steve Burch (he/him), a bilingual middle school librarian on bass, Mashaal Ahmed (she/her) from the United Arab Emirates on drums, and Barrett Browne (he/him), a formerly Cameroon-stationed Peace Corps member, on lead guitar. The band brings a harder-edged sound to the folk arrangements Rosie (she/they) picked up and carried with them cross-country from San Francisco, California, where they previously worked with Oakland’s experimental, ambient producer Geoff Saba.

Visit Rosie Cima & What She Dreamed Online for more music.