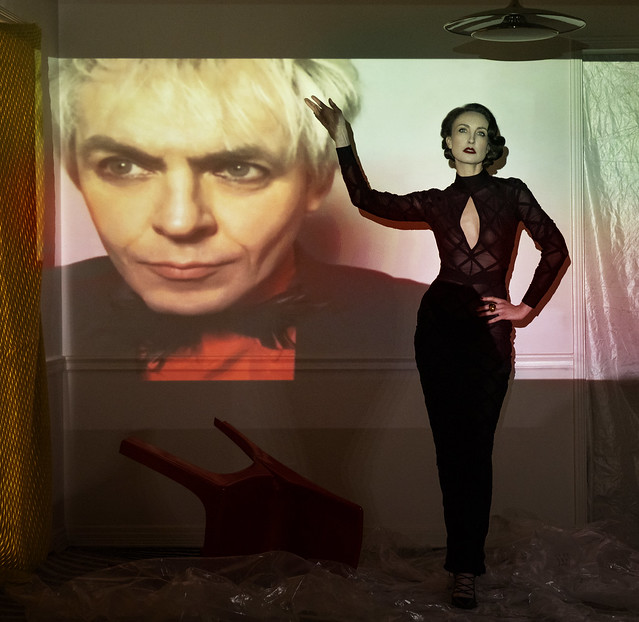 Duran Duran synthesist Nick Rhodes and violinest Wendy Bevan team for Astronomia I: The Fall of Saturn, the first of four albums to be released on equinox or solstice days throughout 2021.

Nick’s own Tape Modern published the ambient instrumental on Friday, March 19, and the duo then shared a visualizer video for “The Great Attractor.”

Astronomia is a creative collision of analogue synthesizers, violins, voices, and orchestral arrangements fueled by Nick and Wendy’s shared attraction to the Universe.

Said Wendy, “Once we decided the universe was our subject matter, the sonic world we conceived became a space for dreams. We suddenly found ourselves free of boundaries; the concept opened a portal between the reality we were facing in our everyday lives and something other-worldly that we couldn’t quantify, gazing into the endless possibilities of the future.”

“Inspired by the lustre of stars, we had the perfect setting to create a musical language. All fifty two pieces we wrote for the Astronomia project have become a memoir locked into a time capsule; musical notation to be released into the mysterious abyss.”

Said Nick, “The Fall of Saturn is a musical allegory for these times. A moment to reflect upon our fragility, the way we treat each other and our planet. A symphony of hope and dreams for our future.”

“In today’s world, we are besieged by information that is often manipulated or untrue, computer enhanced with the intention to draw us in and convince us about an alternate reality on offer… This has only served to make me want the real thing more than ever. Working with Wendy, together we have been able to circumvent the system of predictable and generic sounds. We have created our own unique solar system outside of convention and it feels natural, it has a pulse and a temperature. It will survive independently, each album orbiting out there on its own for anyone who is curious enough to tune in.”

Watch the video visualizer for “The Great Attractor” on YouTube:

Based in Los Angeles, Wendy Bevan is a British musician and multimedia artist. As a singer and violinist, she has collaborated and worked with music producers including Paul Simm (Neneh Cherry/Amy Winehouse) Howie B (Björk/Tricky). Wendy’s songs have since been synched on several feature film soundtracks, including her song Hanging on the Wire (2015) on the Reg Traviss brit gangster movie Anti-Social, and the Pacitti Company feature film, On Land Guard Point scored by Michael Nyman in 2012, saw her song Starless Night (Co-Written by David McAlmont) used within its main score. Wendy’s debut album, Rose and Thorn, was produced by Marc Collin of Nouvelle Vague and released on Kwaidan Records/!K7 Records in 2016.

Based now in London, Nick Rhodes founded global pop juggernaut Duran Duran in 1978, serving as synthesist and keyboardist for the band through 14 studio albums, most recently 2015’s Paper Gods. Since the ’80s, Duran Duran have placed 14 songs in the Top 10 of the UK Singles Chart and 21 in the US Billboard Hot 100, selling more than 100 million records. Nick and his bandmates celebrate 40 years as published recording artists this year, and Duran Duran anticipate releasing a new studio album in the coming months also.