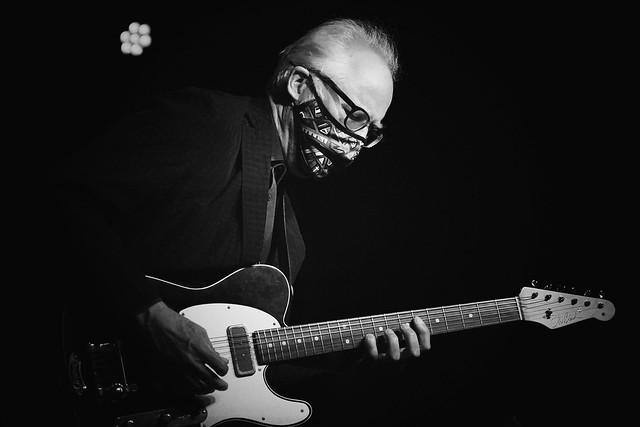 Some in the area and even within the city might be still unfamiliar with Keystone Korner, and that’s understandable given the unusual circumstances of the past year. But it probably won’t be long before the venue located on the corner of Lancaster and Eden is the pride of the Inner Harbor.

A reincarnation of a San Francisco venue boasting the same name, Keystone Korner in its first life was a North Beach neighborhood bar that from 1973 to 1982 drew world-class jazz musicians to play for crowds of no more than 200 people. The talent was booked by jazz pianist Todd Barkan, who considered himself “a jazz servant” and brought countless stars through the famous and cozy spot, including the likes of Art Blakey, Dexter Gordon, Bill Evans and Stan Getz, who reportedly called the storied Keystone Korner “far and away the best jazz club in the world.”

All these years later, Todd is a National Endowment for the Arts Jazz Master, an honor presented to only the most accomplished jazz musicians, and thanks to his many relationships forged over the years, his hope to recreate the same “living room” atmosphere in Baltimore appears to be coming to fruition, even despite the ongoing pandemic, as shows are now being scheduled more frequently with a noticeable uptick in high-profile artists getting back out on the road.

Announced only weeks ago and billed as the Bill Frisell Trio, Saturday’s and Sunday’s shows featured the powerhouse lineup of Bill and two of his most beloved fellow musicians, bass player Thomas Morgan and drummer Rudy Royston, a close-knit triumvirate that teamed up for the acclaimed 2020 Blue Note Records release Valentine.

Playing two unique sets of music to at-capacity, socially-distanced crowds Saturday night, with everyone—including the artists — wearing masks, Bill was actually back where he was about the time the pandemic began—he’d performed at Keystone in early March of 2020, literally within days of major cities shutting down.

During the pandemic, in a conversation with Parklife DC, Bill mentioned that those shows gave him hope about the scene and the experience Todd was trying to create. Those gigs also preceded the release of Valentine, an album “Downbeat” magazine labeled a 5-star “masterpiece.”

In that same 2020 interview, Frisell described his music as a kind of continuum in his mind — and he seemed dedicated to a life-long mission to discover and express new sound through his writing and via collaborations with countless other musicians, many of them highly regarded in their own right. Bill writes music constantly, seemingly addicted to chasing that next perfect note or direction within a boundless realm — his fascinating abilities, routine and commitment to his craft were wonderfully captured in the 2017 documentary “Bill Frisell: A Portrait.”

Club patrons Saturday night were treated to the extraordinary synergy between three men who Frisell considers first and foremost friends. Bill, soft-spoken and gentle, handled his custom J.W. Black Telecaster carefully and with a clear sense of responsibility. More of a facilitator than a director, Bill seemed to pick up as if in the middle of a session that had been going on for ages.

Walking casually into a 12-bar blues progression to start the second show, the trio warmed the dimly lit room, which had fallen soft at Todd’s introductory commands with only the occasional clank of glassware in the bar, which is decorated with artwork of past jazz greats along with photos of some of the noteworthy musicians who’ve already come through the establishment.

Bill’s playing was comforting and inviting from the first few notes, he himself well aware of how to cozy up to his guitar, which, as has been documented, features a variety of hand-culled or friend-suggested components that help make it one of his favorite instruments in a healthy arsenal of rigs. Those pieces of hardware, in many ways similar to his recorded albums, are representative of the relationships he continues to develop to this day as a man who lives a life of his passion.

While you couldn’t read the expressions under Bill’s funky mask, and he of course had little to offer verbally, anyone could sense how thrilled he was to stretch his legs and catch up with two comrades.

Rudy Royston, who hails from Denver, is smooth, patient and precise. His gaze through his glasses and through a rainbow of stage lights was sharp and focused, and he seemed to capture Bill’s attention for so much of the evening. Rudy made a name for himself in Colorado’s jazz scene in the early 90s, recording on dozens of albums, eventually working his way out east. He was crisp during the trio’s take on “Georgia On My Mind,” leading a more lyrical effort with his drumming than any vocal version might be able to offer.

Thomas Morgan is a California native who began playing stringed instruments at age 7 and has recorded with a long list of famous musicians. He’s collaborated with Bill on four albums and seemed totally natural alongside him Saturday night. He was graceful in action and celestial in appearance, showing only hints of playfulness to remain unobtrusive and foundational to every sound in two distinct 80-minute-long sets.

Couples ordering drinks at the U-shaped bar, families and small groups dining in booths or at the tables covered in white linens — everyone in the room, including local musician Cris Jacobs, seemed grateful to be there and to take in such a significant performance. But it was clear too that the three gentlemen on the stage — like everyone else, limited and challenged by the necessary precautions of the moment — were celebrating a much-needed night together, in the collective pursuit of melody.

Bill’s desire to encourage the very best from his fellow musician turned out to be a gift for those closely watching and, more importantly, listening to the performance at Keystone Korner. To end its second set, the trio offered an edition of “Shenandoah” — a track recorded by Bill in 1999 on the album Good Dog, Happy Man — that was not only breathtakingly gorgeous, but nurturing, as both Thomas and Rudy demonstrated remarkable complementary timing and accuracy in constructing this truly unforgettable song.

Fittingly, the trio closed its Saturday night run off with “We Shall Overcome,” a gospel song reinvented for the Valentine record and one that drew great praise for its elegance and its individualistic glow that can clearly only come from Bill’s masterful touch.

Here are photos of Bill Frisell Trio performing at Keystone Korner Baltimore on April 24, 2021. All photos copyright and courtesy of Casey Vock. 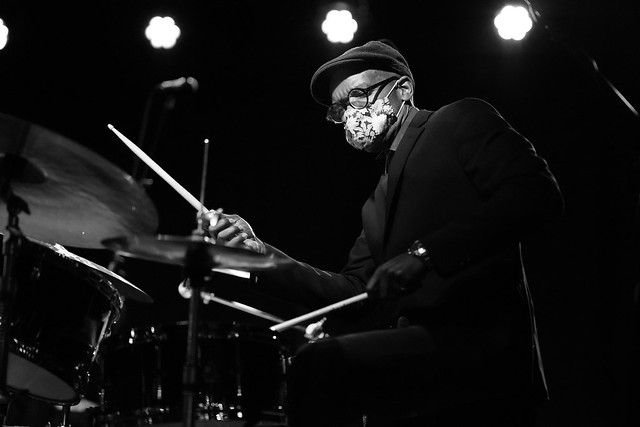 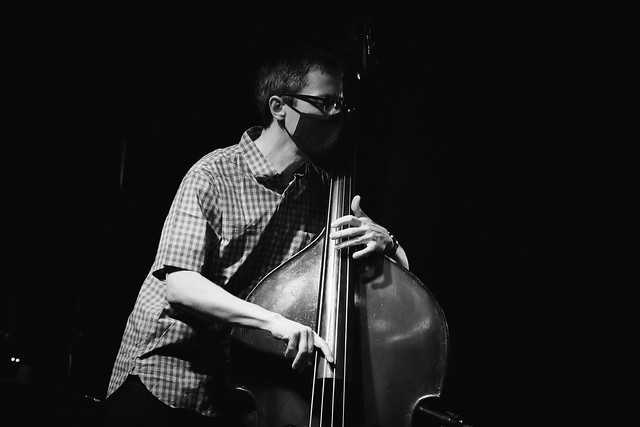 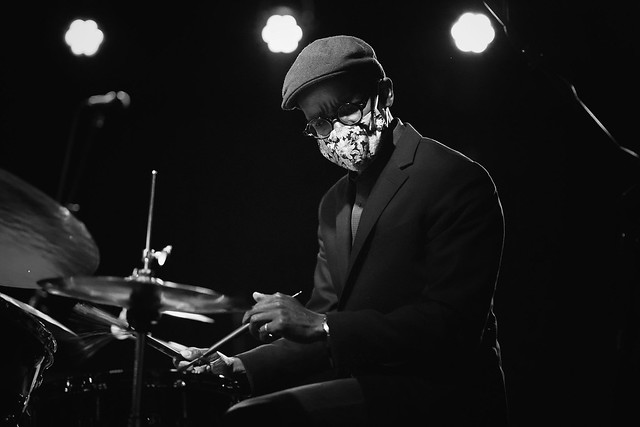 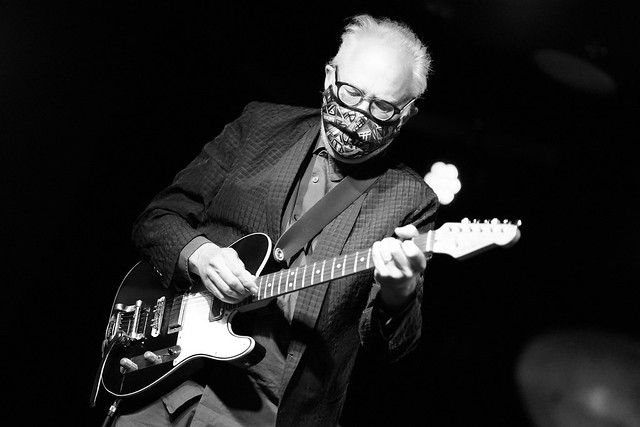 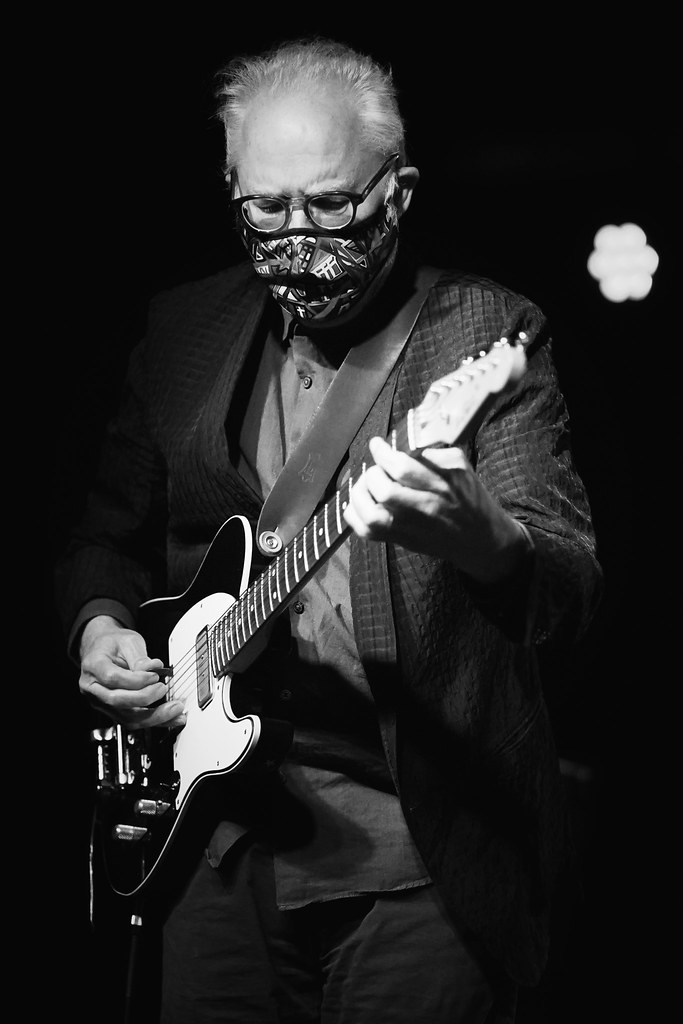 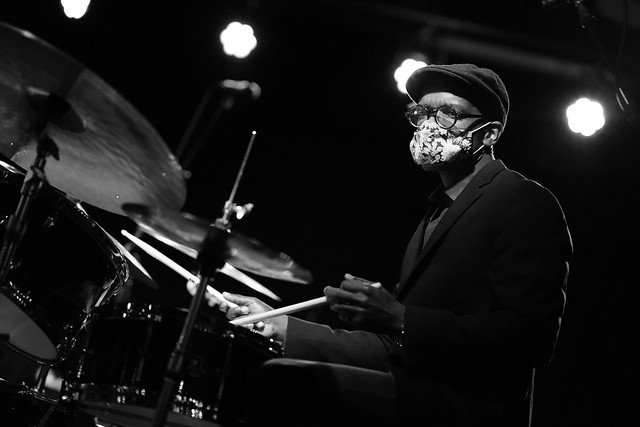 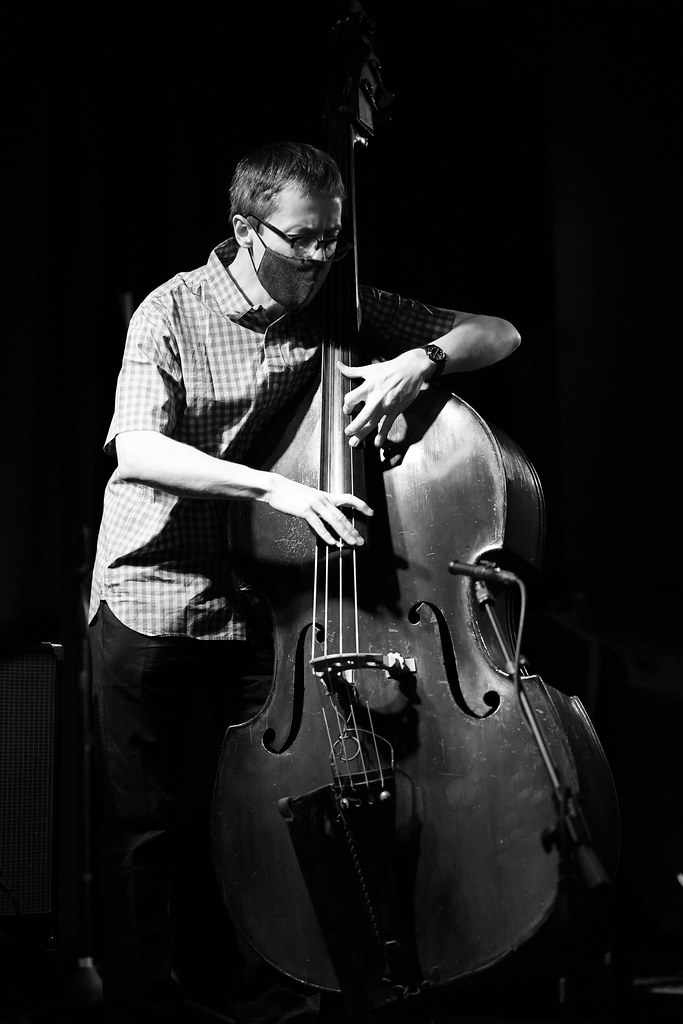 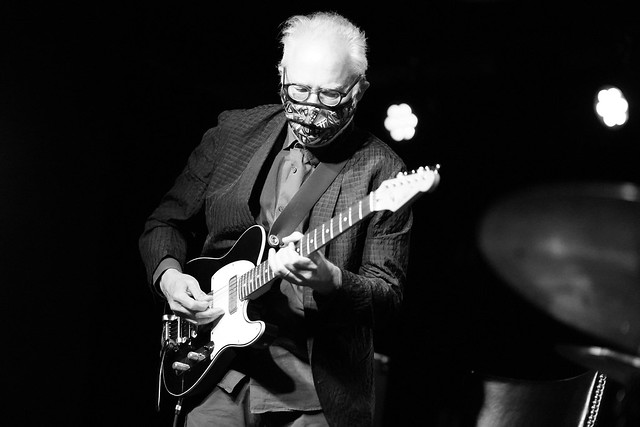 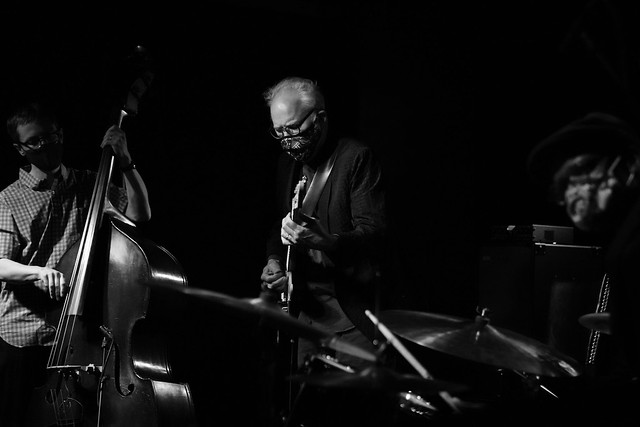 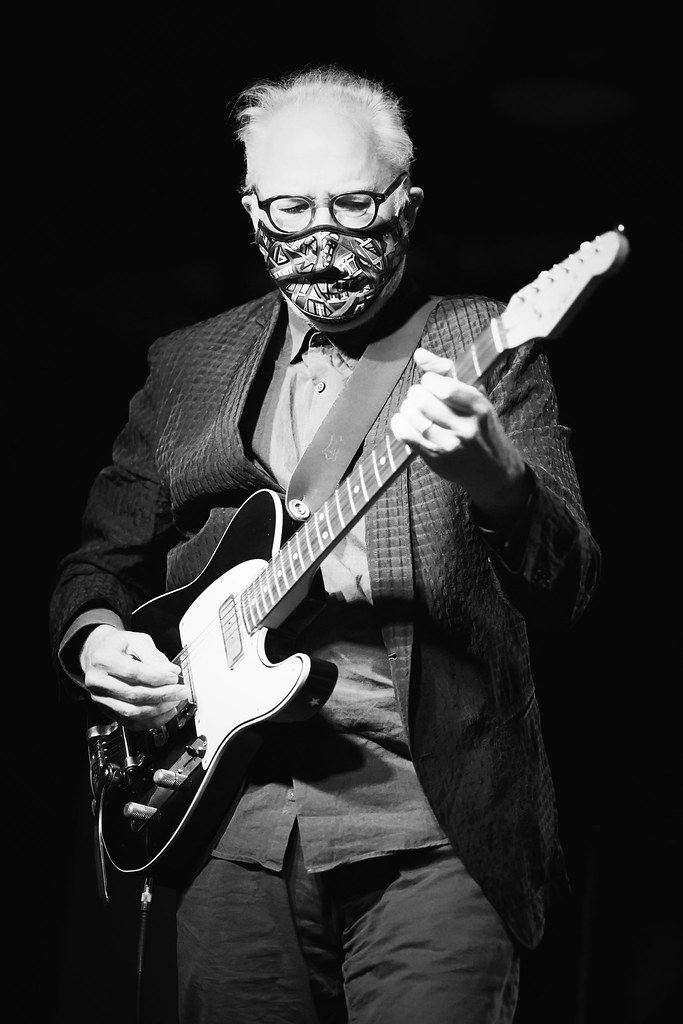 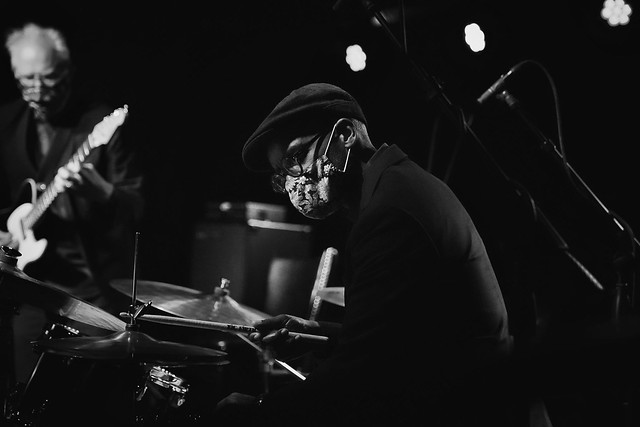 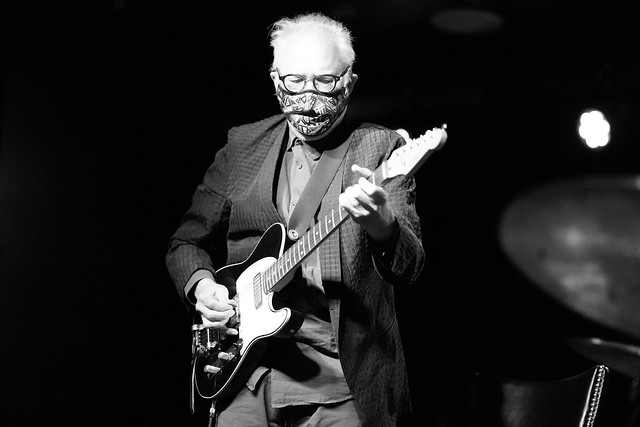 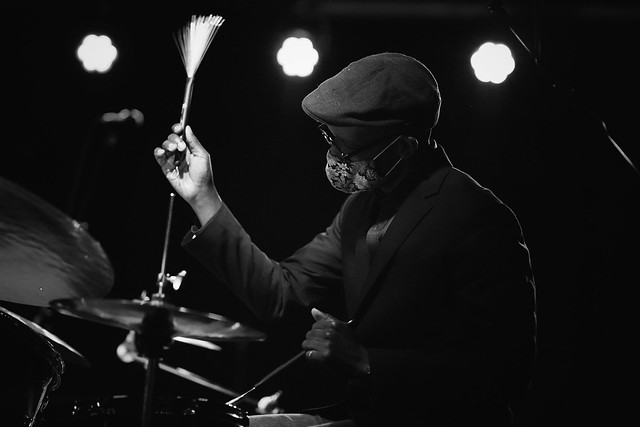 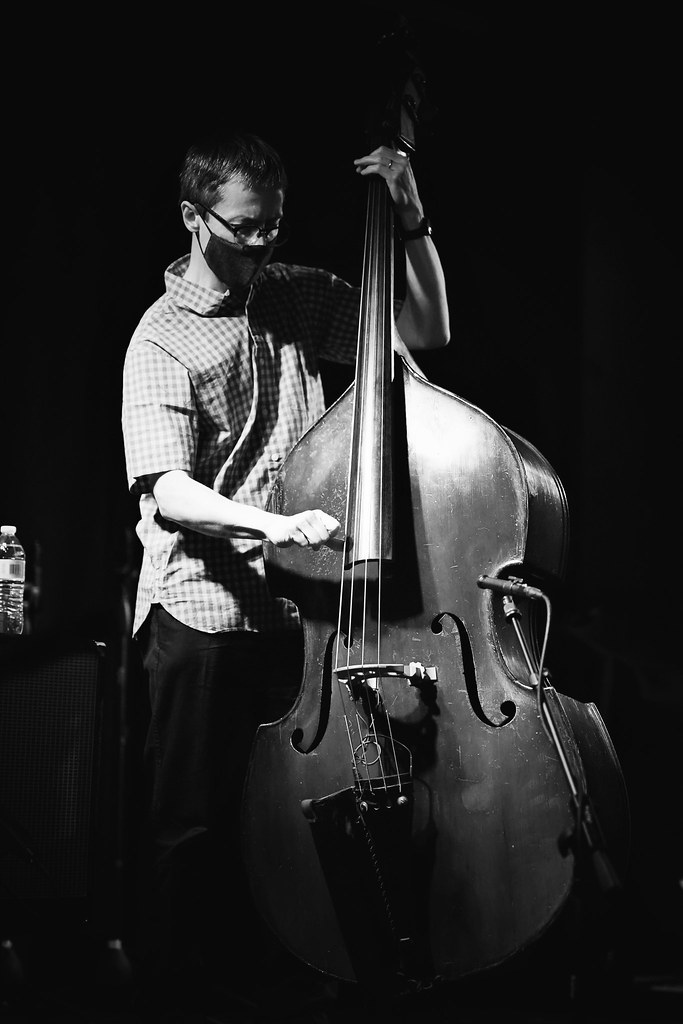 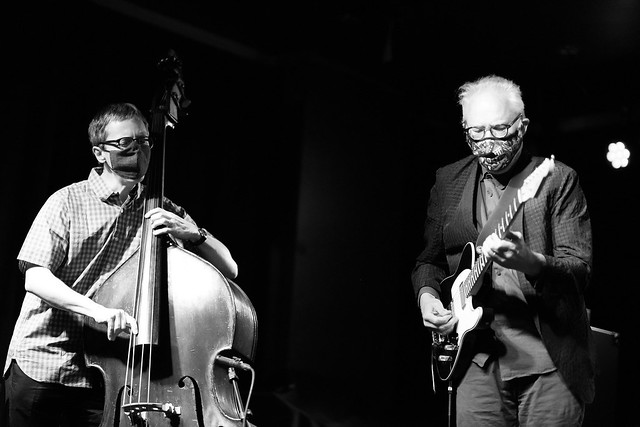 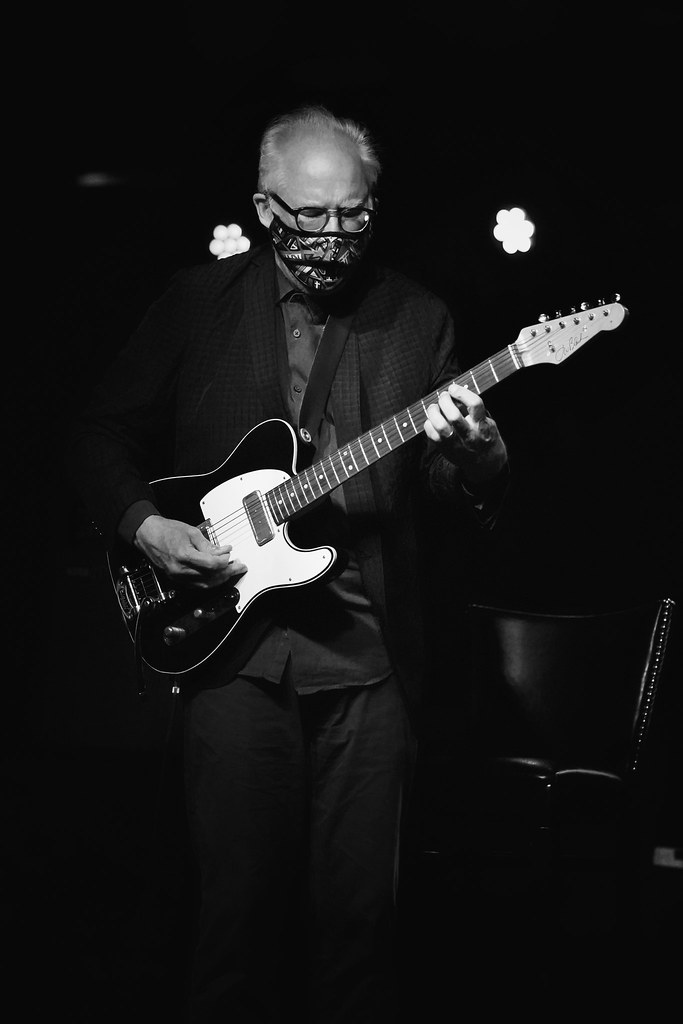 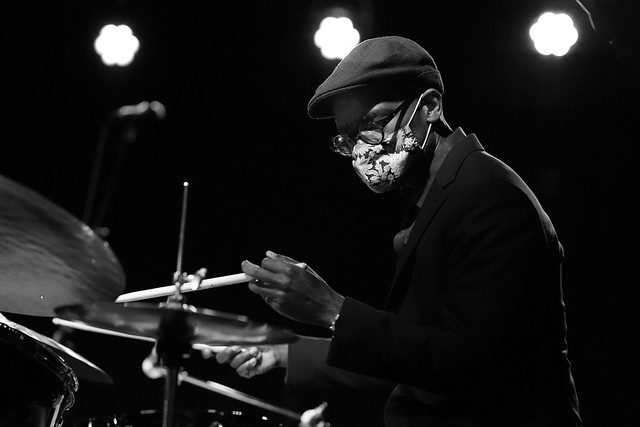 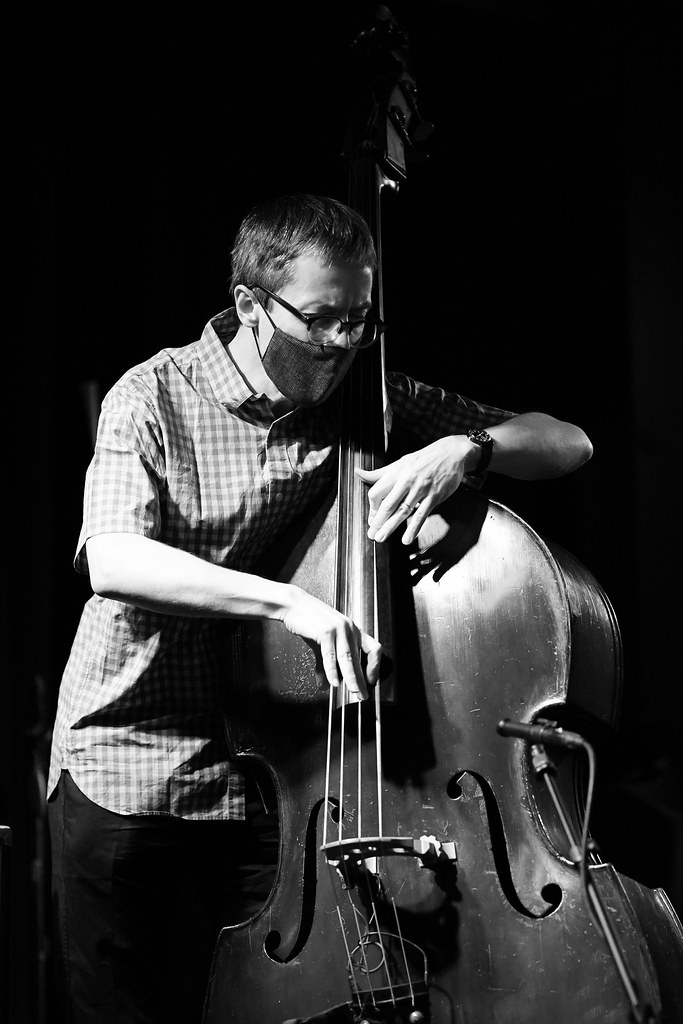 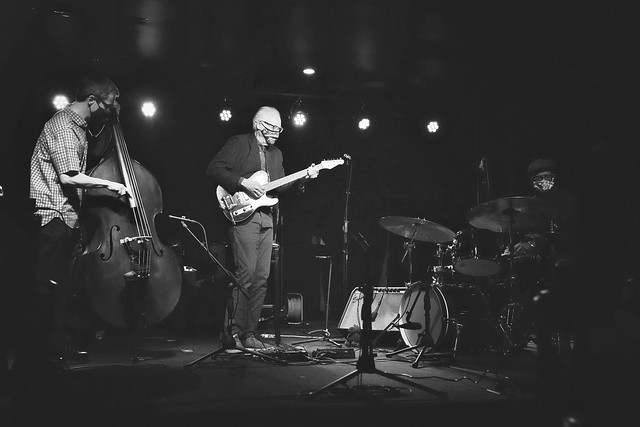