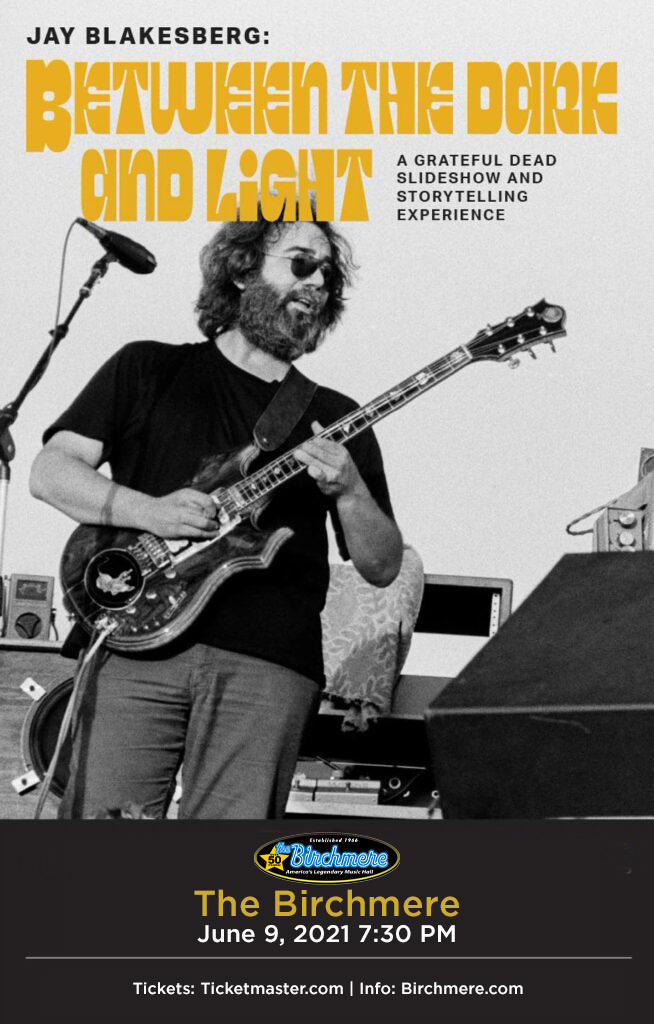 Between The Dark and Light: is a fast paced slideshow/storytelling presentation featuring rock-and-roll photographer Jay Blakesberg, who shares many stories from his amazing 40+ year career photographing the Grateful Dead experience. During this 90-minute presentation, the charismatic and funny Blakesberg regales attendees with photos and stories related to his epic rock-and-roll American Dream story.

Catch Jay’s presentation at The Birchmere on Wednesday, June 9!

The story kicks off in the colorful 1970’s when Jay and his friends lived by the gospel of rock and roll. Those lazy teenage days were spent in Jay’s bedroom with a turntable and a bong listening to classic vinyl records that sent Jay daydreaming about how to get to the Haight Ashbury and search for the magic that blossomed in that San Francisco neighborhood a decade earlier.

After an epic psychedelic experience on a winter “snow day” off from school in 1977, Jay knew that rock and roll could save his soul. It only took a handful of Grateful Dead concerts before Jay found his people, and “got on the bus” and began his great American adventure. His love for photography began in 1978 after his father gave him an old Pentax camera to shoot the Grateful Dead performing at the Meadowlands in East Rutherford, New Jersey. Back then, Jay simply wanted to create memorabilia to plaster on his bedroom walls and began obsessively seeing and shooting his favorite bands live: Hot Tuna, Eric Clapton, The Grateful Dead, Neil Young, The Who, and Bob Dylan to name a few.

In the mid-80s he settled in San Francisco and began to build a professional career as an in-demand commercial rock photographer whose work has been published in preeminent books and magazines — including Rolling Stone, Guitar Player, Vanity Fair, Esquire, and Relix – to name a few.

This engaging, fast moving presentation grants the audience an “all access” pass to his Grateful Dead photo archive, where he photographed the band, first as a fan, and than as a journalist, and ultimately as an insider working for them. Between The Dark and Light: includes Blakesberg’s story of serving as the official photographer for the Grateful Dead’s 50th anniversary “Fare Thee Well” concerts that took place in 2015.

Today, Jay — the once shutterbug hobbyist — is one of the music industry’s most sought-after rock photographers, known for capturing the explosive energy of the live music experience as well as the intimate moments of one-on-one portrait photography. Most significantly, Blakesberg is a preeminent fixture on the jam band scene whose body of work in this arena makes up a comprehensive photographic archive of the modern psychedelic rock-and-roll tribe that began 50 years ago in the Haight-Ashbury district of San Francisco.

“After this long hard year of Covid, I can’t wait to get out there and share these stories and images with my like-minded friends and freaks, it is time to re-connect and prepare for full re-entry,” Jay said.

Between The Dark and Light:
The Grateful Dead Photography of Jay Blakesberg
The Birchmere
Wednesday, June 9
Show @ 7:30pm
$25
All ages