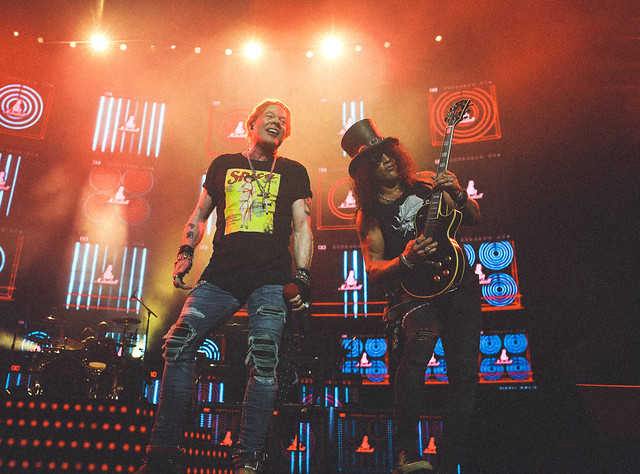 It must be a difficult process deciding which songs make it into a setlist when you have created numerous hits, including some of the most famous songs in rock and roll. But for Guns N’ Roses, it appears that the decision was easy — just play everything. Over the course of an epic 3+ hour set at Royal Farms Arena in Baltimore recently, Guns N’ Roses managed to fit in every major single, numerous deep cuts, a few covers, and even a historical moment.

With the booming bassline start to “It’s So Easy,” Guns N’ Roses burst onto the Baltimore stage on Sept. 26. They followed that with “Mr. Brownstone,” and opened the show with back to back songs off their mega successful debut album, Appetite For Destruction.

From their first album, to their most recent, Guns N’ Roses flowed into the title track off of their 2008 release, Chinese Democracy. With the video board backdrop showing images of a heavy handed ruler keeping the anonymous people in line, the band brought forth a visual representation of the lyrics. This song also showcased the first dual guitar solos of the night, with both Slash and Richard Fortus taking a moment to show off their skills.

As the stage lights turned to a stark red and white, a change in tone was apparent. Drawing from the color scheme of Slash and Duff McKagan’s early ’00s band, Velvet Revolver, the band used the slow grooving bass line to showcase “Slither,” their first cover song of the night.

It is hard not to get excited seeing Axl Rose, Slash, and Duff all back on stage together. After a two decade separation, their reunion for the “Not In This Lifetime” Tour in 2016 rekindled the enthusiasm fans had for Guns N’ Roses during the height of their fame. No song was bigger than “Welcome To The Jungle,” so it came as no surprise that when GN’R played the massive hit the crowd was at its most electric, singing the song so emphatically that they nearly drowned out the band.

Rather than have a traditional backdrop with the band’s logo behind them, Guns N’ Roses made use of a massive video board, allowing them to play a different video specific to each song. This video accompaniment was used most successfully during “Estranged,” the band’s grandiose, 9-minute ballad. The video in the arena was of someone deep underwater, swimming around and through a wrecked battleship emblazoned with the Guns N’ Roses logo. The imagery was a reminder of the song’s outrageous music video in which Axl jumps off of a tanker ship and swims with dolphins.

Watch the official music video for “Estranged” by Guns N’ Roses on YouTube:

Managing tempo is critical to a performance when putting on such a long show, and Guns N’ Roses handled the task well. As some of the crowd made use of their seats during the slower “Estranged,” a moderate tempo version of “You’re Crazy,” more akin to the version on the GN’R Lies album as opposed to their fast Appetite version, brought the energy back up a little, but it was just a warm up for the punch that was about to happen.

“Rocket Queen,” brought everyone back to their feet and showcased both Richard Fortus and Slash with another set of dual guitar solos. “You Could Be Mine,” Use Your Illusion 2’s most aggressive single, had the house lights up for much of the song, encouraging fan involvement.

Halfway through the show came a special moment for everyone in attendance. Shortly after the summer tour started, Guns N’ Roses released a new song, “Absurd.” Originally recorded during the Chinese Democracy sessions, the song was never officially released until this past August, which gave the fans their first opportunity to see it live on this night. But what came next was historical in nature. With Axl giving a quick mention about how this song was supposed to be played earlier in the show but that he “…had a snafu” with his equipment, he then went on to say that the next song was about “lower education.” And with that, Guns N Roses performed live, for the first time ever, their brand new song “Hard Skool.”

The three original members of GN’R commanded the front of the stage all night long, but each were given their individual time to shine as well. Axl’s voice soared to the roof of the arena, still managing to hit the many high notes required for singing any Guns N’ Roses classic. Slash was featured for numerous guitar solos, including an extended solo that kept him planted at the front of the stage for more than 10 minutes. Duff’s low end could be felt throughout the show, but he also took the lead when he stepped up to the mic to sing a cover of The Stooges “I Wanna Be Your Dog.” 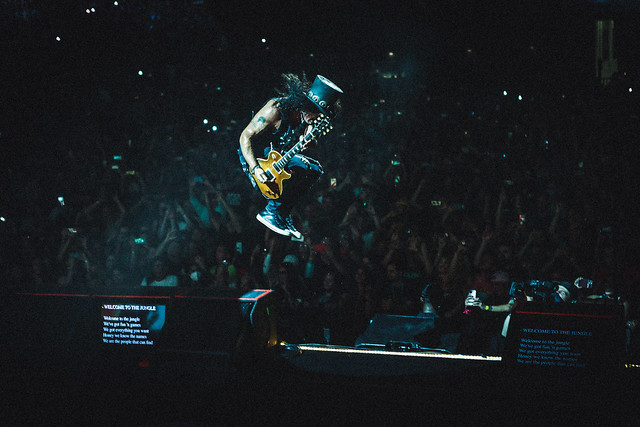 Most of the eyes were focused on the guys everyone grew up listening to, but it was impossible to miss the wild movements of rhythm guitarist Richard Fortus. Leaping and spinning around the stage, the man attacked his hollow body Gretsch guitars with such reckless abandon that you almost felt bad for the thrashing they were under.

While most of the piano and keyboards work was handled by Dizzy Reed and Melissa Reese, Axl Rose took the keys for “November Rain.” With a black grand piano rolled out to the front of the stage, and showered beneath a glow of purple lights, Axl sat upon a piano bench designed to look like the back half of a motorcycle, and every man, woman, and child was compelled to sing along with him.

Top hits “Sweet Child O’ Mine,” “Patience,” and “Civil War” all made the setlist. Deeper cuts like “Double Talkin’ Jive,” “Better,” and the 10 minute long “Coma,” also found their way into the show. Even their famous covers of “Knockin’ On Heaven’s Door,” and “Live and Let Die” were featured.

Despite a three hour long main set, the crowd hollered for an encore, which GN’R were happy to oblige, playing a few more songs and closing the show with “Paradise City.” It was a marathon concert, but Guns N’ Roses persisted and made sure that over the course of their show, every fan ended up hearing their favorite tune. 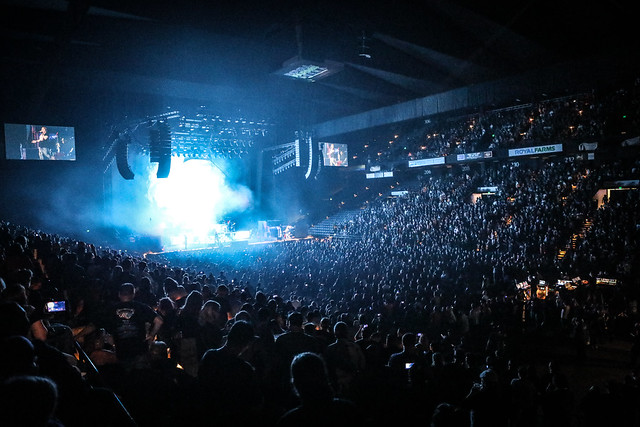