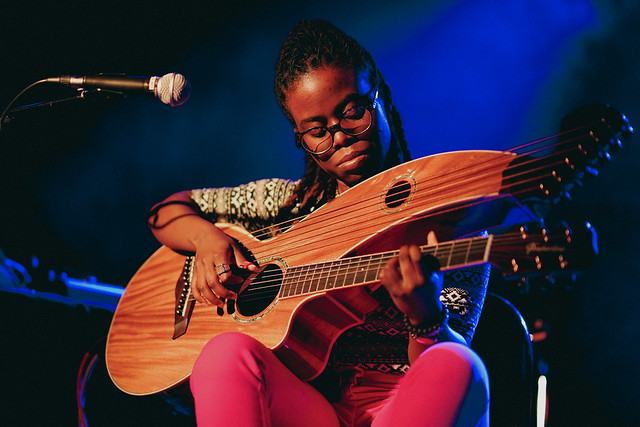 The hero the DMV might need is hanging out just across the Potomac, and she’s got a guitar in her hands.

And at just 25 years old, Yasmin Williams is on a trajectory to capture the attention of listeners far and wide as a multi-dimensional guitarist with an otherworldly skillset far beyond her years.

On Nov. 22 at Union Stage, Yasmin — or just “Yaz,” as she’s affectionately known by close friends and fans — dazzled a seated audience with an assortment of compositions rich in texture and gorgeous in sound, but also impressed with her nonchalant acumen.

Williams, who attended Woodgrove High School in Virginia, recorded her first album as a senior, a five-song digital EP, only about three years after she decided that guitar was the way, and several years before she’d enroll at New York University to pursue her BA.

“I started playing guitar because I beat (Guitar Hero 2) on expert (mode),” Yaz told the Union Stage audience during her show.

“I had Rock Band 2, and but I didn’t beat that. When I started, I played electric guitar, and I started trying to play (Jimi) Hendrix and Nirvana. Hendrix was hard, but Nirvana was easy. But I got bored. I realized I was playing the same chords and I wanted to be, like, shredding.”

And so, she turned to the acoustic guitar, which she believes is more than just one instrument, and she showed the crowd at Union Stage her remarkable abilities on a variety of different guitars, sometimes with unconventional tuning, and using her own brand of fingerpicking and refreshing percussive techniques.

Her fingers rolling swift on the strings with intricacy and natural grace, a warmth radiating from the confident smile on her face, Williams wore on her feet a pair of tapdancing shoes, which she would knock against a mic’d wood board throughout a world-class set and what was essentially a local show for the young woman from Northern Virginia.

She began the night with an untitled piece — an exhilarating, winding composition that she premiered a couple years ago in Newport, Rhode Island, an important destination where each summer young guitarists and folk artists make names for themselves.

Halfway through the song, she reached her right hand to the fret board of her Avante Gryphon 12-string guitar, slap-tapping at different pitches to totally augment the texture of the composition. Even her instrument choices are rooted in an effort to explore the realm of tonality — the Gryphon is a guitar designed to create a sound similar to traditional folk instruments like the bouzouki, mandocello and more.

So deliberate and assured in each movement she made, it was accompanied by her thick grin all the way.

“I wrote that the night before I played the Newport Folk Festival, which I highly recommend playing, if you can,” her sarcasm giving way to a giggle.

“It’s a little hard to get in. But I basically improvised the second half of that on stage, which is not a good idea, and I don’t recommend that. It’s a lot of pressure. And I haven’t recorded it yet, and I don’t really remember what I do, so I’m making it up. … That doesn’t really have a title yet, but feel free to hit me up if you have any ideas.”

The second song of the night saw her switch guitars, moving to her Skytop Grand Concert Multi-Scale Acoustic to perform “Juvenescence,” an illustrious, humanizing track that has become her most-streamed offering from this year’s Urban Driftwood, her second full-length studio release. No coincidence, the “driftwood” in the most recent album title is a tribute to this particular guitar. Making it ring last week in Washington DC, Yasmin’s right hand was fluid like a painter’s brush, her fingers agile in flicking over the strings in an impossibly intricate manner.

Turning the large body onto its back and resting it on her lap, drawing gasps from those in the room who didn’t know what to expect, Yasmin about midway through the song broke into what has become her signature fret-tapping. Her hands in motion like she was playing the piano, Williams showed a knack not just for masterfully handling guitars but also controlling a room like a professional entertainer.

“This year has been crazy — it’s been zero to 100,” said Yaz, who’s been explored by a list of radio and TV programs and featured in publications like Acoustic Guitar Magazine and Vintage Guitar.

“I had a Tiny Desk (concert) drop last month. I’m proud of it. … This year has just been great. … Just playing shows again has been great. … Last year sucked. It’s nice to see people, talk to people, actually do something with my life.”

Though only in her mid-20s, she admitted she can’t relate to some of the music she hears the generation behind her exhausting — making it difficult for her to cover songs currently embraced by popular culture.

“What are these young people listening to? I can’t even get it,” said Williams, who herself listened to plenty of hip-hop in her formative years, along with jazz and other styles that would create her foundation of reference. She suggested she wanted to find contemporary songs to perform acoustically but was not particularly inspired as of late.

“I mean, I’m only 25, but I can’t transfer Young Thug to guitar. Please, if anyone has any recommendations …”

Down-to-earth, sincere and ready to laugh, Yaz offered more songs from Urban Driftwood, which was released back in January on Spinster Records and garnered positive responses from the likes of No Depression, Paste, Pitchfork, Rolling Stone and more.

Using a small, curious object known as a mallet hammer, Yaz performed a contemplative, brisk version of “On A Friday Night,” a song from her 2018 album Unwind that she wrote as a lonely NYU student who spent plenty a weekend evening by herself. She carefully bopped the body and strings of her guitar, ushering a stuttered beat, much like an actual drum line that sped up to color the song and drive it along its path.

“Swift Breeze,” a song that uses an overdub track to create a harmonious layering, showed Yasmin’s propensity for finding a rapid, enthralling and unconventional rhythm on the guitar and then dressing it with delightful earthen qualities that can only come from her command of these instruments and the sounds they create.

“YEAH YAZ!” more than one sassy voice shouted from the tables, cranking Williams’ smile wider yet.

Two-thirds through the set, Yaz got up to grab yet another guitar — this one a mind-boggling device known as a harp guitar. The Timberline T60HGHpc features a second extension, or what’s considered a sub-bass harp arm, and at Union Stage it gave Yasmin another opportunity to leverage her inborn competence in getting the most out of any instrument she embraces.

“I rarely bring this one out, because it’s a hassle to travel with,” she said. “There’s really not that much going on. It looks more intimidating that it is.”

Clutching the colossal body, Williams performed “Virga,” which she was commissioned to write for the Amazon Original series. It manifested as a gorgeous, floating piece that saw her using her right hand to create melodies on the lower set of strings, while her left hand would reach over the upper arm, plucking the sub-bass strings to laminate and boost the tone from the expanded wood interior.

Cozying into her seat as the set moved along, Yaz went back and forth with the audience, open to questions about her style and her equipment.

“This is a cool, casual show. It’s supposed to be fun. Whatever y’all want to know, I will happily answer.”

Yaz told of Earth, Wind & Fire catching her ear as a young girl, an affinity that sparked her interest in the kalimba, an African instrument comprising a wood board and metal tines that are plucked to produce sound. Distinguishable in consistency, this small instrument was placed directly onto the face of her sideways-sitting Skytop — it can be heard to clear effect on the title track to her latest album — and she used it on a couple of songs late in her set at Union Stage.

Much like she mastered a video game to discover her talents within, Yaz showed such dexterity in simultaneously playing two instruments, and in treating the acoustic guitar like so much more than just that — a perspective she reiterated to the crowd as she went.

“I view it as more like 10 instruments,” she said.

Ending the night with what is currently her most popular track on Spotify, “Restless Heart” translated to a gorgeous blend of Yaz’s soothing acoustic surface and her innovative percussive attack. It seemed to move in different directions, curling back on itself to create a theme of reflection and reconciliation.

“Thanks for coming,” she glowed, resting her elbows on the neck of her Skytop. “I don’t think I’ve ever been to a show on a Monday, so I appreciate it.”

If she hadn’t already, Yaz convinced at Union Stage that she has the all the power in her fingertips and the pleasant charisma in her being to inspire a generation of kids to do whatever they want with, whatever instruments they so choose.

Here are images of Yasmin Williams performing at Union Stage in DC on Nov. 22, 2021. All photos copyright and courtesy of Casey Vock. 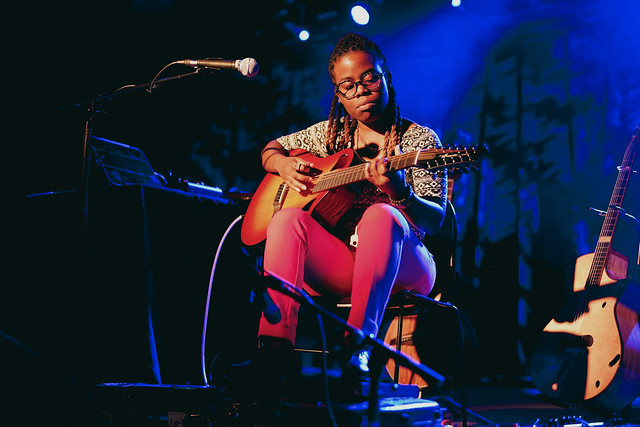 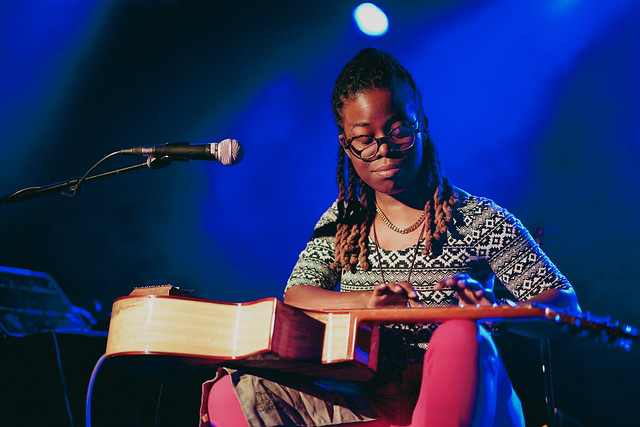 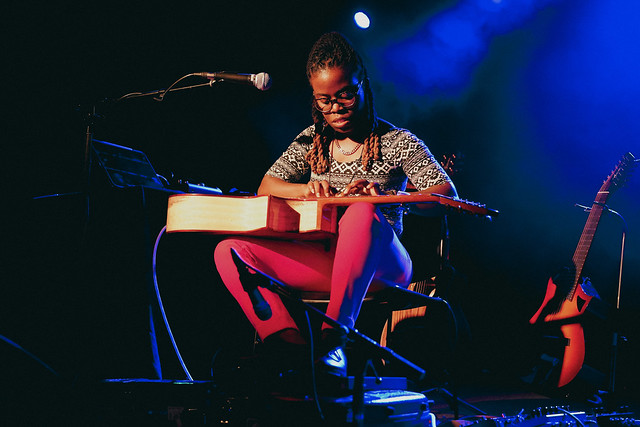 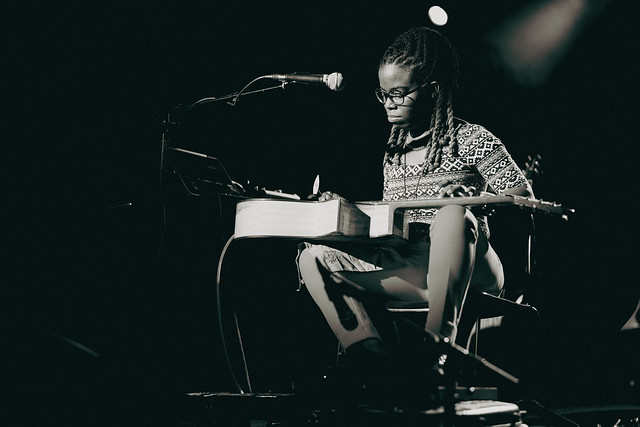 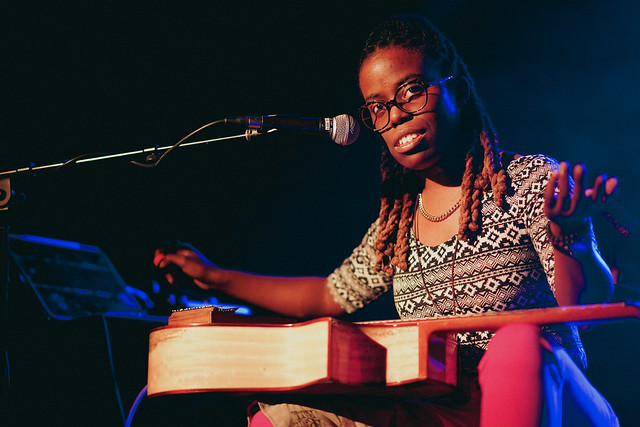 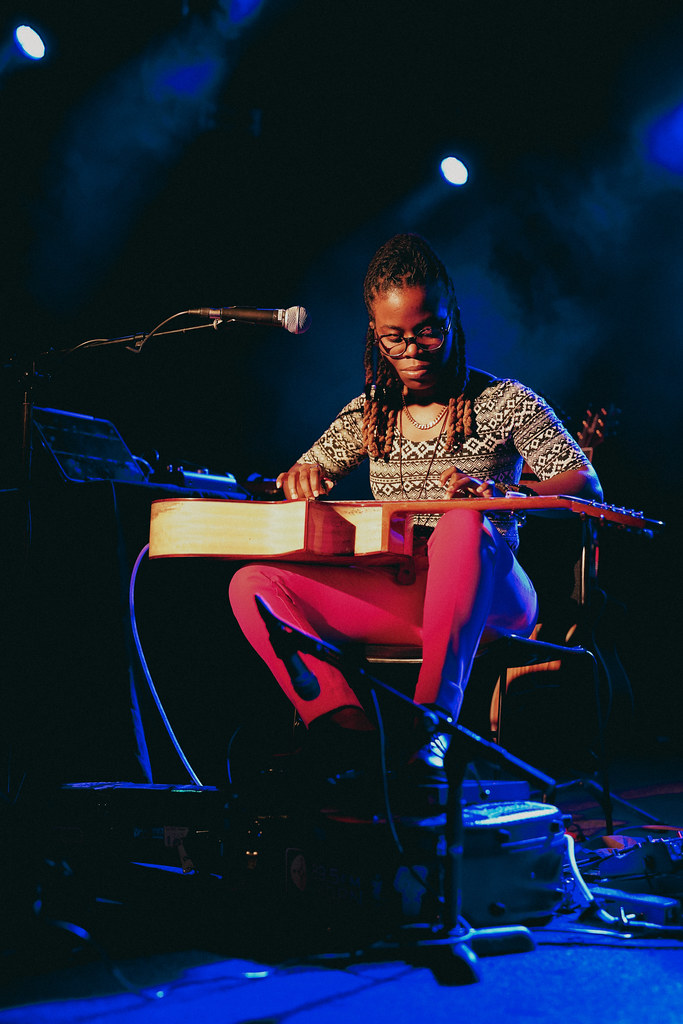 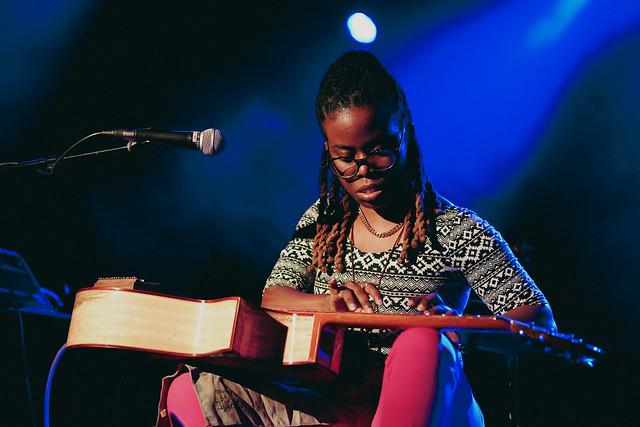 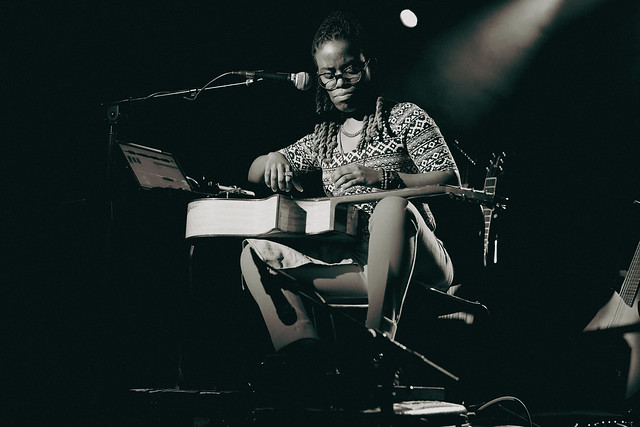 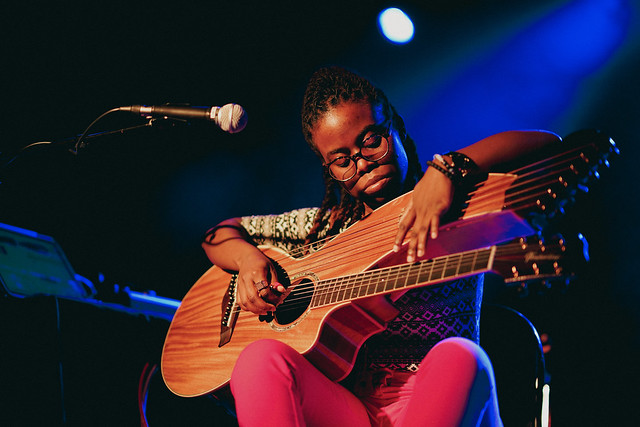 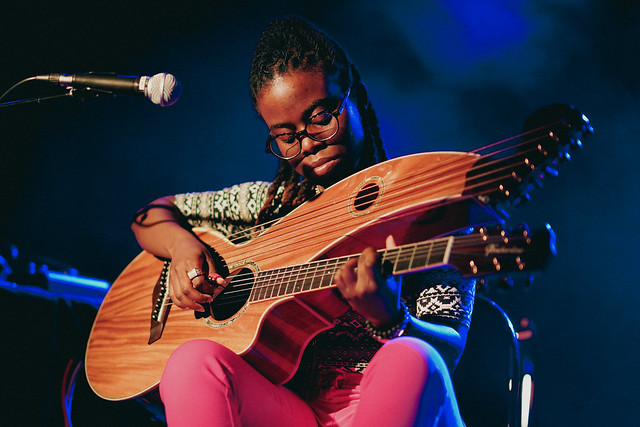 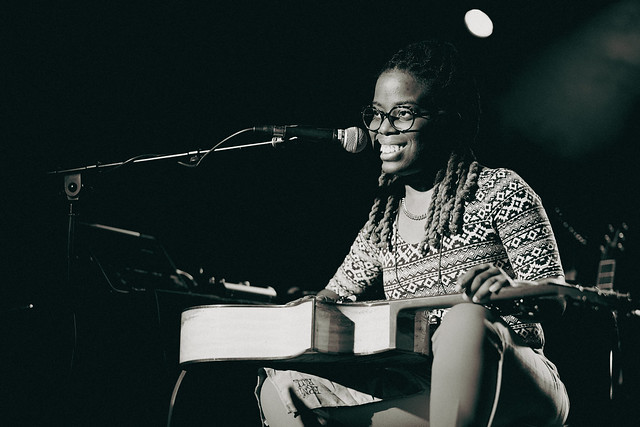 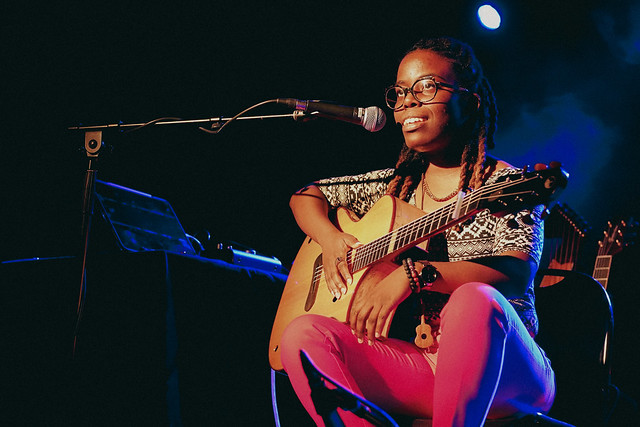 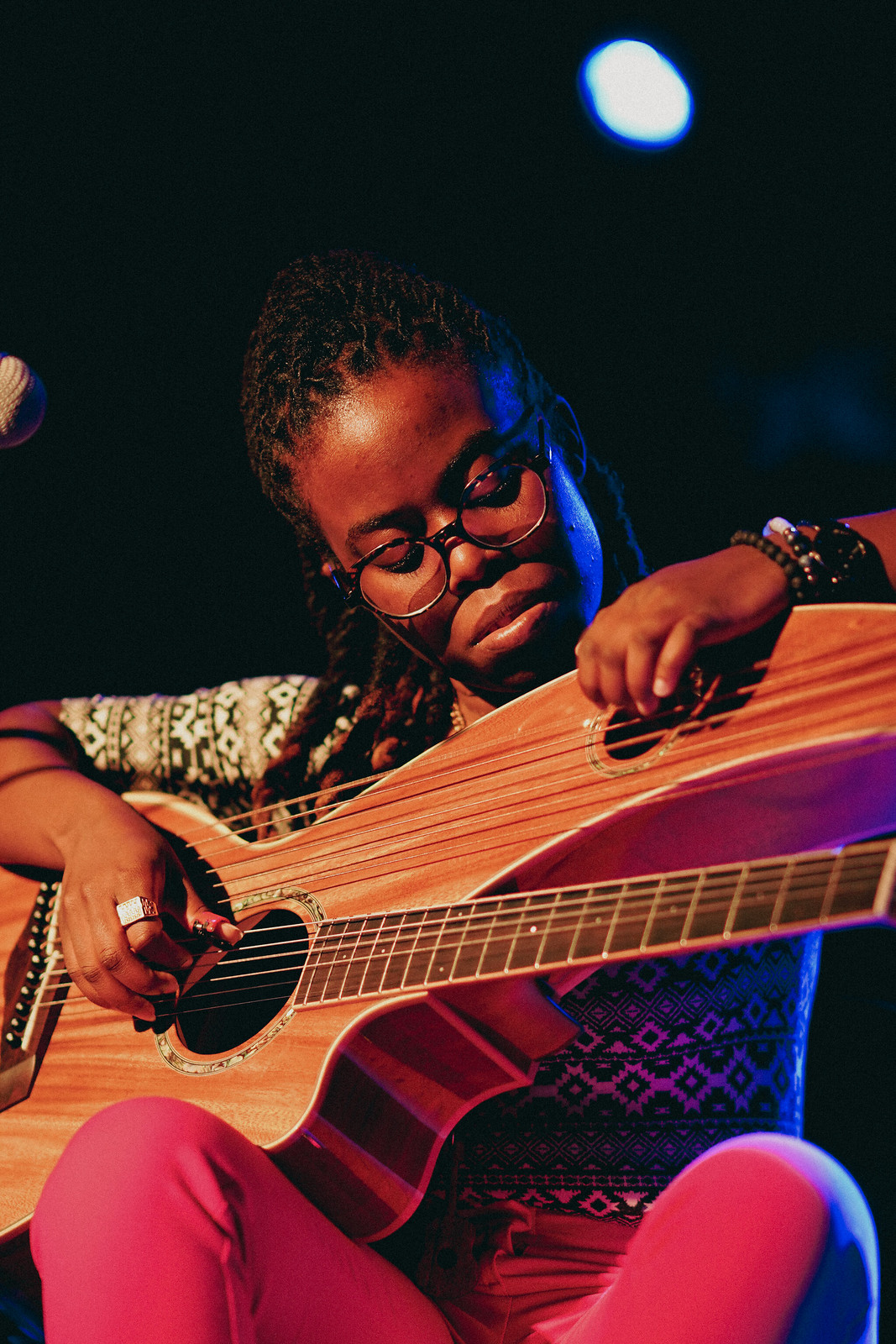 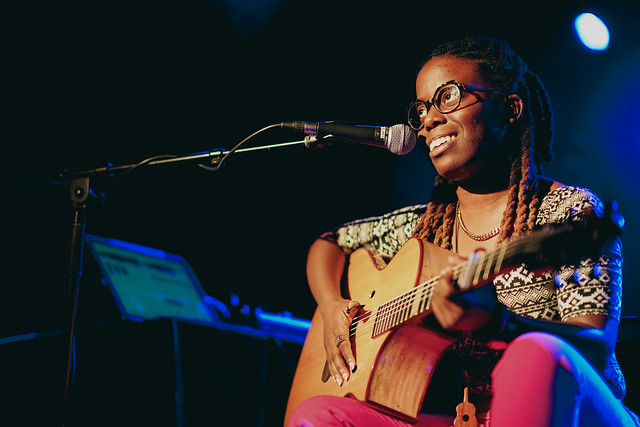 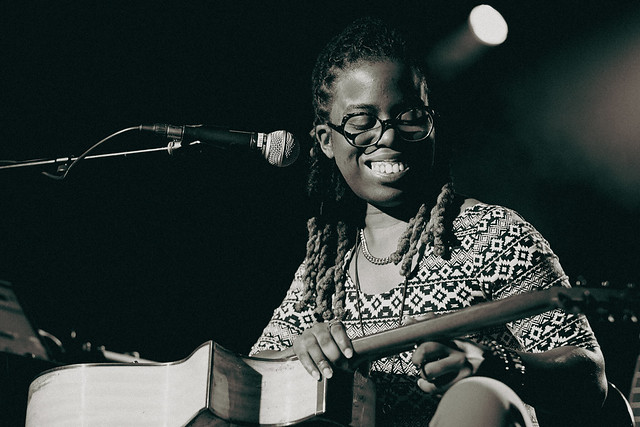