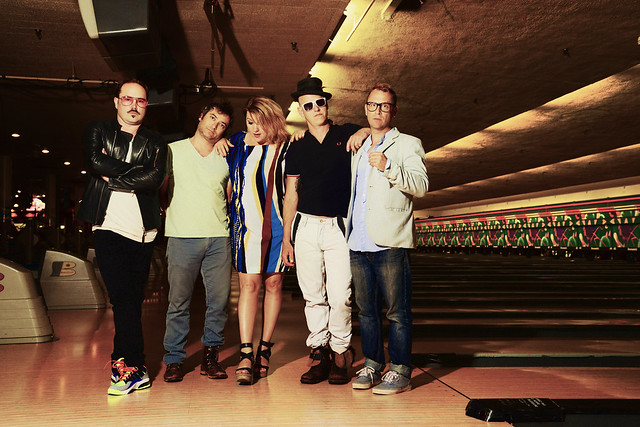 Campbell handles lead vocals on that number himself, as he does with another standout song on the new album, Trap Door, a song about the transient (and perhaps meaningless) nature of being on top or maybe the hollow pursuits of status in a world where status confers nothing particularly special upon you.

As the band leaps into full boogie mode, Campbell’s emoting keeps pace and he stamps out lyrics like, “You always did the things they told you to/You always bought that shit they sold you, sold you.” Clad in tie and jacket, Campbell looks downright professorial, but he makes for a formidable frontman.

The band are entirely in good spirits Thursday night despite confronting questions as to whether anything we do ever matters. The very full room at the 9:30 Club absolutely adores Stars, and the sing-alongs (most notably on “Your Ex-Lover Is Dead”) and dancing from the audience put Campbell and Milan in a cheerful disposition, and even encourages them to take their performances up a notch.

Of course, the duo singers take advantage of their lineup to sing the occasional duet, such as with “One More Night,” a song about a last night between two lovers from their 2004 album, Set Yourself on Fire. They deftly use the number of people in their band to good advantage, swapping vocal duties and instruments as circumstances warrant.

Stars have only five more U.S. dates, starting tomorrow night in St. Louis, before hopping to Europe and Canada. If you don’t get a chance to catch them now, they return for more U.S. dates in March 2015. This may be their best album, and they are certainly in top form, so it’s time to see them if you’ve missed them so far or if it’s been a while.