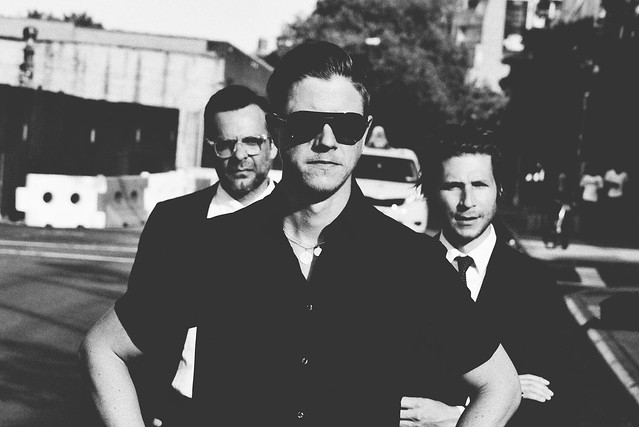 The setlist is heavy with those new songs including “Anywhere,” “My Desire,” “Everything Is Wrong,” “Breaker 1” and finally in the encore “All the Rage Back Home.” And it’s a fast, crisp set, designed to be lean, red meat for the Interpol audience. And the audience eats it up.

It’s a delight to see that Banks and Kessler have great chemistry behind their guitars with each other and also with drummer Sam Fogarino, the third official member of the band. They also clearly enjoy playing with their touring keyboardist Brandon Curtis and bassist Brad Truax.

The show was filmed, presumably for the purposes of a video release in the future — but occasionally the film was projected onto the screen behind the band, which served to highlight the ultimate strength of the show — the powerful talent of the band. The audience is mesmerized by the images of Banks as he leans forward, singing into his microphone, and similarly enraptured by close-ups of Kessler playing guitar as he pumps his left heel in time.

A concert highlight comes with “Evil,” a plaintive selection from the band’s outstanding second album, Antics. The song presents one of many opportunities for drummer Fogarino to shine with its snappy beats. Banks’ voice is clear in contrast to the ambiguity of the song, and the audience knows well the words to this number and to Antics’ “Slow Hands,” a song that evokes a search for love and romance and that might well serve as an anthem for the band in general.

Interpol wrap up the U.S. leg of their El Pintor tour tonight in Philadelphia, so you’ve sadly missed them if you didn’t catch them on this tour. They are now off to tour the rest of the world for the next six months or so. But when they return to the United States, you should definitely make it a priority to see them again at the earliest possibility. When you do, you’ll find a newly refocused and refined band at the top of its game.