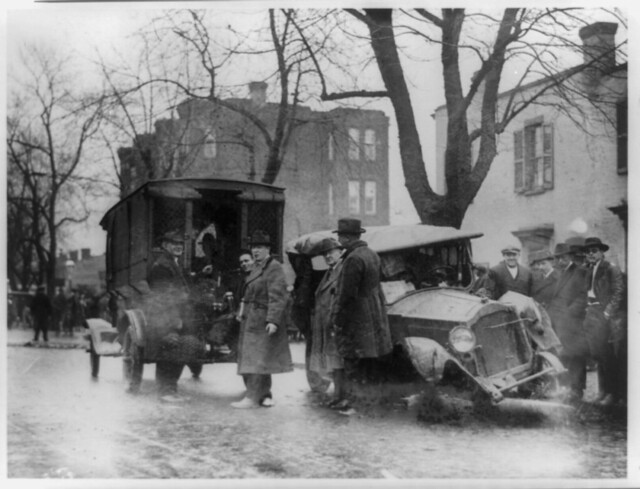 After a thrilling chase through the busiest streets of Washington, a couple of bootleggers and their car are apprehended by the Capitol police, on Jan. 21, 1922. (Original photo courtesy Library of Congress)

The Doyle Collection Hotel Group, owner and operator of the Dupont Circle Hotel (1500 New Hampshire Ave. NW, DC), has restored and colorized some Prohibition Era photos from the Library of Congress to commemorate the 81st anniversary of Repeal Day.

“The vivid colors bring these images to life, perfectly capturing both the fashion and atmosphere of this fascinating chapter in American history. Many of these historic photographs are set in Washington, the home of our own Dupont Circle Hotel,” Doyle Hotels say on a blog dedicated to the photos.

As DC only celebrated Repeal Day last week, we all may recall that the 18th Amendment outlawed alcohol throughout the United States in 1919 in a ban that lasted for 13 years until the 21st Amendment overturned it.

“Throughout the 1920s, the government worked to enforce Prohibition, although those who opposed the law found ever-creative ways to enjoy a drink! Bootlegging (the illegal manufacturing and sale of alcohol) was rampant, as were stores and clubs who secretly served liquor. These became known as speakeasies, since customers had to keep their voices down to avoid attracting police attention,” says the blog.

You can view all of the restored pictures online at the Doyle Collection Hotel Group website.

Interestingly, the Ireland-based Doyle Collection Hotel Group has eight hotels throughout Ireland, the United Kingdom and the United States, but our Dupont Circle Hotel is the only U.S. location.