Paperhaus is a band in touch with its feelings.

And those feelings often manifest themselves in six-minute songs that project the majesty of a space or an idea — “Mountains are moving high against wide sky,” vocalist Eduardo Rivera sings by way of example on the very new “Untitled.”

In that way, Paperhaus often wear their prog-rock influences on their sleeve. The band’s ethereal and lengthy guitar riffs and often-mystical references certainly *smack* of King Crimson or early YES but its winning formula of two guitars, bass and drums and a love of jamming out feed their self-described psychedelia. Lyrically, Paperhaus explore topics like the joy of being alive or the pain of lost love.

The band debuted some new songs backstage at the Black Cat on Tuesday, Dec. 9, opening for Jamaican Queens. The kicked off with “Untitled,” a selection from their self-titled debut album set for release in February. “Untitled” seems to celebrate being alive with references to a bit of religion and a bit of nature, and the pleasant, ambling guitar work couples well with Eduardo’s airy, soft voice.

The song is very much in line with the first single from the album Paperhaus, “Cairo,” which makes mythic references to a storied DC apartment building. The key sounds are the same — the cascading strings, the subtle funky bass and a nimbleness that seems to float the melody above the stage.

Alex Tebeleff and Eduardo play their guitars as a unit and the band’s sound benefits from their united effort. Once the songs get rolling, drummer Danny Bentley and the bassist click together well.

Another new song, “It’s Not There,” gives Paperhaus a chance to experiment a bit. Alex takes over on main vocals for the song, which is described as being about someone saying something isn’t there when actually it is there. Alex’s huskier voice suits the more grounded and somewhat darker material.

Paperhaus almost are done for the year. They play a tribute show to Kraftwerk at U Street Music Hall on Sunday, Dec. 14. But more importantly, they play a record release show for their debut LP on Saturday, Feb. 7, at the 9:30 Club as part of DC Music Download’s Third Anniversary Party. 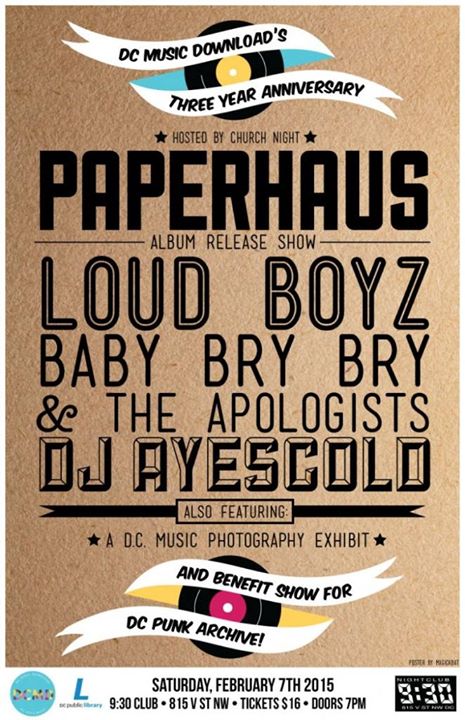