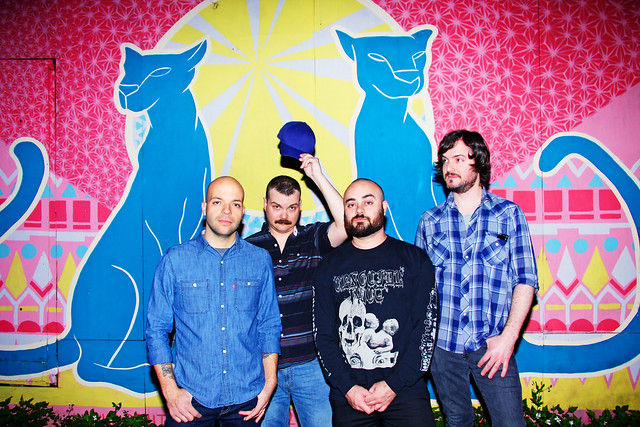 A lot of the album sounds much like the track “Minions,” an expressive dismissal of mindless people, which lets the guitars roam almost languidly and cover a lot of territory.

They play it very well coordinated with bassist Jonathan Nuñez and guitarist Andrew Elstne banging their heads to punctuate the minimalistic yet muscular beats. The same sort of hard rock jamming continues on “Believe It,” a struggle to leave behind those things that haven’t worked and look to the future. The lyrics give Brooks an opportunity to slowly enunciate, which suits his voice and temperament, with words like “You better believe it/ Hoping the future is all/ Everything you thought/ Don’t let it go on/ Too long.”

While it’s not all as loose as those selections, the “Restarter” title track is a rollicking condemnation of modern politics with a simple message: “Our leaders are done with conversations.” Those are the only words ever spoken over a rolling wave of rock and roll. The lengthy musical interludes put the spotlight on drummer Rick Smith, who keeps fantastic time, and who must also have been more than warmed up after also serving as drummer for opening act Wrong, fellow Floridians who offered a truly raucous heavy metal show (in contrast to Torche’s much more nuanced heavy rock).

I would be wrong, however, if I gave you the idea that Torche never cross that line into the heavy metal genre. Restarter’s “Annihilation Affair” is a post-apocalyptic affair about the death of mankind, at least as represented in its new video, with minimal lyrics that evoke terror and destruction. It’s with songs like this that Torche try to have it both ways, absolutely sprinting across the line from hard rock to heavy metal. And they largely succeed because their audience readily embraces the material.

Torche have closed their current tour, but with their reignited ambition to focus their creative efforts on promoting the band, you’ll likely hear from them again soon. Put them on your radar if “heavy rock” is your cup of tea!