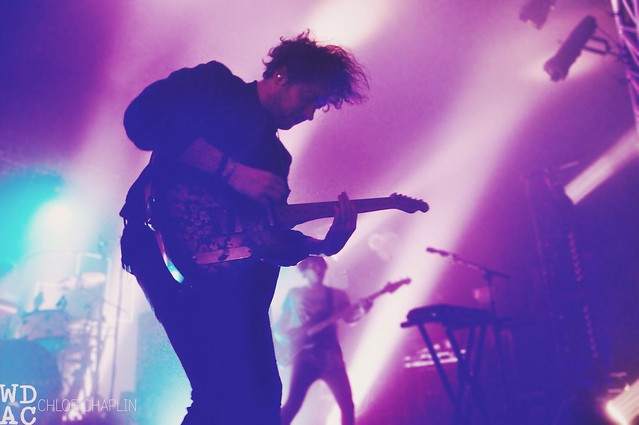 The band opened with “Your Body Is a Weapon,” the lead single from the new album actually released nearly a year and a half ago. The band then played a number of songs from their second album, This Modern Glitch, a consistently strong album with quite a few catchy tunes including “Techno Fan” and “Tokyo.”

The second album suggested an embrace of more mature themes than the debut, A Guide to Love, Loss and Desperation, which preoccupied itself with the concerns of young adults and decisions they make, or don’t make, in songs like “Moving to New York” and “Kill the Director.” Interestingly, The Wombats return to the concerns of the young on Glitterbug while still moving into a fuller, bigger new wave sound as shown on Glitch without losing any of their charm or immediacy.

And the young crowd danced and sang along to new songs like “This Is Not a Party,” a tale of a chaotic night of running with your friends “This is not a party; it’s a hurricane./And no one really cares, so let’s pretend we’re all okay.” The audience claps along enthusiastically to the lyrics of “The English Summer” and its refrain of “This awkward feeling is getting in the way” — clearly a relatable lyric.

In addition to singing, Matthew switches off between guitar and synths, which he plays on new songs like “Headspace” and familiar songs like “Techno Fan.” His bandmates keep up with the frenetic pace. Drummer Dan Haggis adds to the full complexity of the band’s sound. And bassist Tord Øverland Knudsen is a man in motion. Unlike many other more stoic bass players, Tord is all over the stage, bounding back and forth like a madman having way more fun than should be legal.

The Wombats close out their performance with an encore that includes “Emoticons,” another new song speaking the language of the younger set: “And all these emoticons and words/Try to make it better but they only make it worse.” Of course, the very last song they play is “Let’s Dance to Joy Division,” the riotous first album track that still manages to be their most evocative and fun song. The crowd and I appropriately moshed, drinks raised “to the ceiling” because “we’re so happy.”

The Liverpudlian trio continue to tour across the Midwest this week and through California the week after. They are wildly entertaining and certainly provide a welcome bang for your buck.

As The Wombats noted on Twitter after the 9:30 Club show, #aintnopartylikeagrossmanparty. Don’t miss the party when it comes to your town!