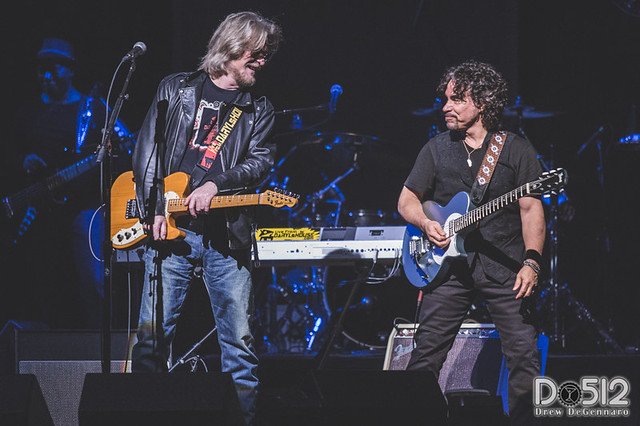 The DC audience, of course, welcomed most heartily “She’s Gone” from the 1973 album Abandoned Luncheonette later in the set.

“We love to play this song because it never gets old,” Daryl Hall said in introducing it. In rapturous agreement, the house gave Hall & Oates their first standing ovation of the night. The extended and heartfelt cheering lasted several full minutes, during which Daryl grinned from ear to ear and practically glowed under the well-earned admiration.

Hall & Oates threw in a few surprises for me, particularly early in the set when they performed “Back Together Again” from 1977’s Bigger Than Both of Us (from which they also later performed “Rich Girl” to much fanfare) and “Las Vegas Turnaround (The Stewardess Song)” also from Abandoned Luncheonette, one of the first songs to infamously draw inspiration from Daryl’s ex Sara Allen (who of course was once a flight attendant). The same Sara, of course, inspired “Sara Smile” from the 1975 “silver album” Daryl Hall & John Oates — a song that the duo also revisited during Wednesday night’s set. Ms. Allen must be a helluva a woman for sure, and we’ll always have these classics thanks to Daryl’s admiration for her.

The whole band rises to the occasion for these heartfelt numbers, but I must give a shout-out as always to the very talented Charles DeChant, who often takes center stage to blow us away with his soulful saxophone. Charles is a consummate performer and a generous presence on stage. His playful interaction with guitarist Shane Theriot, particularly during an interlude for “Do What You What, Be What You Are,” is a highlight of the show.

Charles also gets a little corny at the end for the big finale of “Private Eyes,” a song he knows all too well as he appears on keyboards in the well-known music video in 1981. From the back at stage left during the song, he’s on keyboards once again, miming along to the lyrics of the song, making hand circles over his eyes for “watching” and scurrying hands for “every move.” You can’t say the man doesn’t have a sense of humor.

Hall & Oates continue touring with a show in Columbus, Ohio, on May 1, and then they continue across Pennsylvania then to Midwest and back throughout June and July. It’s a great time to see them! The gents and their band are in fine shape, and surely will not disappoint you.

And if you can’t wait, the new season of Daryl Hall’s “Live from Daryl’s House” debuts tonight with an episode in Mexico featuring special guest Sammy Hagar. Check it out at http://www.livefromdarylshouse.com!