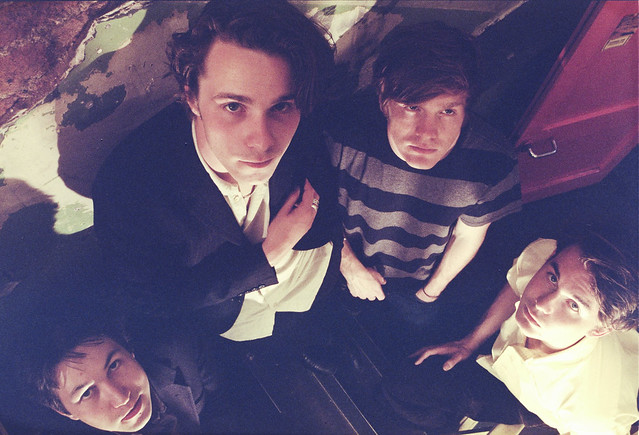 Palma Violets perform at the Rock and Roll Hotel on Monday, May 11, in support of their new album, Danger in the Club, which just came out last week. In anticipation of the show, Mickey McCarter chatted with Palma Violets drummer William Martin Doyle, and he was everything you would expect in a member of the Palma Violets — quick witted, convivial and down to earth! I asked him about the new album, touring and his reputation as part of a great live band.

Mickey McCarter: Congratulations on the new album, it’s getting a lot of great reviews.

MM: When a lot of people talk about Palma Violets, they make reference to the Clash and the Libertines. What do you think about that? Is that good company?

WMD: Well, I think those are comparisons to two really, really good bands! But I’m not really with the Libertines one. I never really listened to the Libertines until we started the band, and then people started saying, “You guys are a lot like the Libertines,” and I was like, “Oh, shit, who is this band?”

And then I listened to them, and I didn’t really get it. I think there are a lot more other influences in our band. But, hey, if it helps people, then it’s good for them.

MM: A lot of people are also saying your second album, Danger in the Club, is more mature than the first, 180. How is the second album different to you?

With this one, we took our time recording it. We slowed things down, and we realized that we are in a studio so we should try to use it as much as we could to bring something different to light.

With the first, it was like capturing that moment in time — that period of time when we were touring and getting caught up into signing.

So we hit the ground running. So we took our time with this one and slowed things down.

MM: Both albums are very raucous! For you as the drummer, you got a lot of work to do there. How does that go for you?

WMD: Yeah, I do! It keeps me fit. It’s a hard part — I’m not going to lie! When something goes wrong, you always point to the drummer first. It’s always the drums! That’s where there is a problem, even it isn’t! It’s made me a much more patient man.

What the innovative video for “Danger in the Club”:
[youtube https://www.youtube.com/watch?v=H6il1Wdqwhs&w=640&h=360]

WMD: The Rock and Roll Hotel!

MM: Yes indeed, and we’ve seen you there before.

WMD: I’m really looking forward to it. It was a really good gig last time. The guitarist from Slayer had just died that day. A spider had bitten him, and he passed away. So we came on in a rain of blood.

MM: You guys are a very English band, and I mean that in a good way. A band with your sound and attitude could only have come from England, in my opinion. And then you play the United States. How do you find your reception to be different?

WMD: If we were to have started out in America, it would have been a lot different. The standard for playing in America is a lot higher than in England. What we have on our side is that we are from England. We’re from the other side of the pond; we’re not a homegrown band. American bands have the same thing when they come here. There’s an interest in what’s new. It’s a good thing.

MM: Well, seriously, you got a lot of buzz out of the gate, and you draw all of these comparisons to legendary bands, and you’re on a legendary label [Rough Trade Records]. Do you ever feel pressure?

But then the Alabama Shakes had just signed too. And then came over and played our little room in 180. And they played. And I heard them, and I was so blown away. I thought, “God, we have so much work to do to be part of this. We really have to pull out everything.”

MM: I saw you in Coachella in 2013. How’s it different for you guys to play a big festival like that and then a more intimate venue like the Rock and Roll Hotel? What do you personally enjoy? Do you enjoy the bigger shows or the smaller shows? Do you do the same thing or do you do it differently?

WMD: The big gigs can be nice. There is something very humbling about going out in front of thousands of people and realizing they are there for you. It’s a really cool thing that someone likes your music well enough that they want to share it with you. They want to be there in that moment. And of course, it’s more open and spacious.

But I like the smaller ones more personally. You can see everyone’s face — you can see the sweat and the blood and everything. They are right up in your face. There’s no hiding from it. But it’s ironic because you probably play like shit in a smaller venue. You can get away with a lot more.

MM: Is there anything you want us to look out for when we see the show? Is there a tune or anything in particular that you guys are proud of?

WMD: At the moment, we have been playing “Matador,” which we really got together live.

There are a few more like “English Tongue,” which I think America will get because it has an American tinge to it. Someone described it as a big barnyard dance. We are going to see if that does work. That should be one that Americans pick up on. I’m quite proud of that one.

MM: You are really known as a live band. For a lot of musicians, playing live is there passion because people can really connect to that. Do you have that sense in that moment?

WMD: I totally agree. Every night can be different. You can play one song amazingly for three weeks, and then the next gig is rubbish but there’s some other song that you play really really well.

And so today with older musicians, you could make a living out of being an artist and selling records. But for us to earn our bread, it comes down to the live show. And we are best live in that tiny room. You’re in their faces, and everyone’s on the same wavelength. It’s a good thing for the music scene.

MM: You are a live band. You have major energy and stage presence when you play. You’re definitely a live band rather than a studio band.

WMD: I have a question for you! The Lincoln Memorial, can you get a picture sitting in his lap?

MM: Ha ha. You can probably get a picture at his foot. You’re not getting into his lap.

MM: No, no, but park ranger might stop you from getting up there. And he’s quite tall, you see, so that might be a problem to begin with.

WMD: We’ll sort it out when we get there!