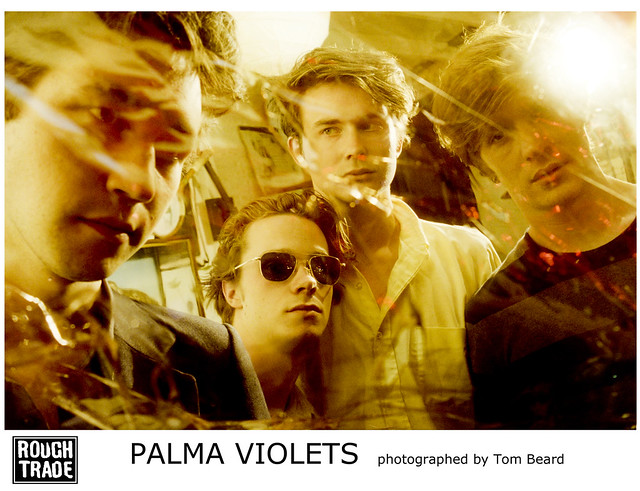 The Palma Violets threw down in an intensely focused and highly energetic show Monday night at the Rock and Roll Hotel.

The British quartet had few words to share with the audience, but they let their music do the talking for them as they pounded through an hour-long screeching rock symphony, each song often banging along frenetically to dissolve in a din of lights and drums.

The comfortably half-full room rose the occasion, cheering on the London garage rockers as they thundered through more than a dozen songs. The audience in the front rows kept the energy high in a cordial mosh pit that lasted the entire show.

Palma Violets were in town to showcase their latest album, Danger in the Club, which dropped only a few weeks ago. But the crowd gave a very warm reception also to first-album favorites from the Palma debut 180, which packed as much a punch now as it did upon its release in 2013.

I last saw Palma Violets at the Coachella Music Festival in 2013, and this performance was much more personal and driven than their festival appearances. The mid-set appearance of “Best of Friends,” the biggest 180 single, was evidence of such as vocalist Samuel Thomas Fryer growls closely into the microphone: “I wanna be your best friend/I don’t want you to be my girl.” The entire band played with vitality, but Will Doyle drives the song along with a steady, melodic thumping of his drums.

Watch a 2014 performance of “Best of Friends” from Jools Holland:

The audience embraced another first-album favorite, “Last of the Summer Wine” with a group clap-along at the beginning of the song. The quiet, reflective song is a change of pace for the oft-spikey Palmas, but the simplicity of the love song is in the best tradition of some of the punk bands that inspired the lads from London. Sam does some wonderfully atmospheric guitar work with the tune, which certainly adds to the sense of amorous nostalgia that gives the song its specific vibe:

Watch “Last of the Summer Wine” from a 2015 performance at WFUV:

Concert-goers certainly were receptive to the new album as well! The title track, “Danger in the Club,” serves as a great showcase for bassist Alexander “Chilli” Jesson, who harmonizes well with Sam as he sets the tone of the song.

The rootsy and catchy “English Tongue” also proved a crowd-pleaser. While not as thrashing as energetic numbers earlier in the set, it certainly thumbs its nose in a very punk manner. It may be that no one understand or agrees, “And everybody knows just who I am/My name’s Hugh Diver I’m the starlit strand.” Keyboardist Jeffrey Peter Mayhew is instrumental in keeping the snarl in the song light with a jaunty score. Lest you think they are getting soft, however, Palma Violets closed their set with a riotous rendition of “14” before stalking off the stage without an encore.

Palma Violets play in Michigan Thursday before a few dates in Canada and a return to New York City and the Bowery Ballrom on Monday, May 18. They play some more east coast dates and then make their way to the midwest and across the country throughout the month of May and the first week of June, when they visit California for some shows. It’s a great time to see them for an energetic, intensely personal performance.

For more reflections on Palma Violets’ live performances, check out our interview with drummer Will Doyle!