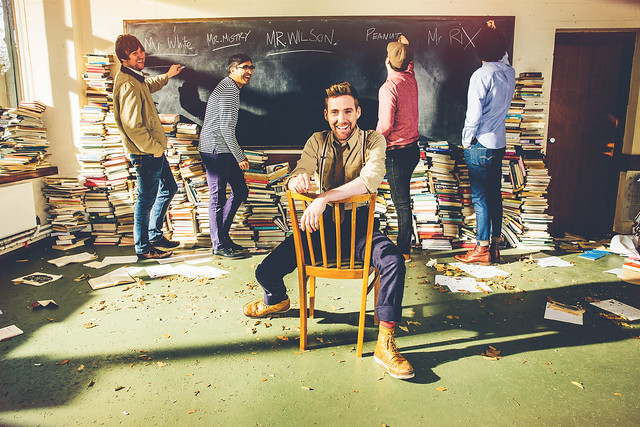 The mighty Kaiser Chiefs blazed a righteous path through one of their signature songs, “I Predict a Riot,” causing an already excited audience to stomp around the dance floor with even more fervor.

Vocalist Ricky Wilson paused a moment after the song and looked to each of his bandmates, coiled like a boxer getting ready to leap forward. With a nod to each of them, it was again showtime.

The quintet jumped into the opening notes of “Pinball Wizard” by The Who — a cover they first introduced in the 2012 Olympics closing ceremony in London. And although Ricky didn’t ride in among an Army of Vespas as he did at the Olympics, the audience at Rams Head Live in Baltimore on Tuesday night absolutely loved it.

Watch the Kaiser Chiefs cover “Pinball Wizard” at the Reading Festival in 2012:

The cover suits the Kaiser Chiefs particularly well as they have a fully realized sound that makes good use of their five members in a power-pop-verging-on-new-wave oeuvre.

The glam guitars and punk attitude, key ingredients of mod in The Who, are also elements of some of the great songs by the Kaiser Chiefs, including the aforementioned “Riot” and “The Angry Mob,” the second album title track with which they started their show on Tuesday. Guitarist Andrew White brings sophistication to his glam rock moments, resulting in an experience a bit more subtle than overtly glam acts like, say, Muse.

Of course, the Kaiser Chiefs have a secret weapon lacking in largely guitar-driven bands in the form of keyboardist Nick Baines aka “Peanut.” Peanut’s keys trigger the stirring opening moments of their “Pinball Wizard” cover. And so it is throughout all of the Kaiser Chief’s most “wave” numbers, including mid-set U.K. #1 hit “Ruby” and encore closer “Oh My God.”

The Kaisers also have a powerful rhythm section in the form of bassist Simon Rix and drummer Vijay Mistry. Ricky took extra time out during the performance to recognize Vijay, the newest member of the Kaiser Chiefs. Although they performed with Vijay in DC at the 9:30 Club in June 2014, the band had not yet brought the new drummer around to Baltimore, and the crowd obliged Ricky by chanting the new guy’s name several times over.

Honestly, I was a bit worried with the departure of original drummer Nick Hodgson, who was responsible for authoring some of the best songs in the Kaiser Chiefs’ repertoire, but my worries were unfounded. The Kaisers are touring still on a remarkable fifth album, Education, Education, Education and War, which is full of clever if world-weary rowdiness and tributes to being one of the lads, if said lads are consciously growing a bit greyer in the past decade. E3 and War followed on the heels of the satisfying if unfulfilling The Future Is Medieval, which came with a confusingly unnecessarily U.S. edition, Start the Revolution Without Me, in a rarely seen marketing maneuver somewhat reminiscent of the debut album from The Clash.

Several songs played from the new album were among the strongest selections of the night, including “Ruffians on Parade,” “Coming Home” and “Misery Company” in particular — three of the finest songs by the Kaiser Chiefs. Celebration in the face of likely defeat is a recurring theme among the most jubilant songs by the group, and the resonant phrase, “And at the last stand of the day/We lost more than we saved” in the play act war of “Ruffians” speaks of the costs of growing up as opposed to the cost of youth, “And in the dark of the arcades/We spend more than we made.”

Likewise, Ricky’s derisive laughter in the refrain of “Misery Company” and its “Ha ha ha ha ha ha ha ha ha ha ha” is an extraordinary use of vocal device to drive a song along instead of a more gentle and less appropriate “la la la la la,” overemployed by many other bands. Here, the high price of living and loneliness is again evident as in Misery Company, “We don’t even know what we’re fighting for.”

The Kaiser Chiefs sadly have only one last U.S. show on this tour for the moment — tonight in Boston at Paradise Rock Club. But it’s an understatement to say that I find them absolutely madly brilliant, and I am not going to miss their show the next time they are within 200 miles of me.

Oh, the Kaisers also have a new single from their upcoming sixth album: “Falling Awake.” Watch the video for it: