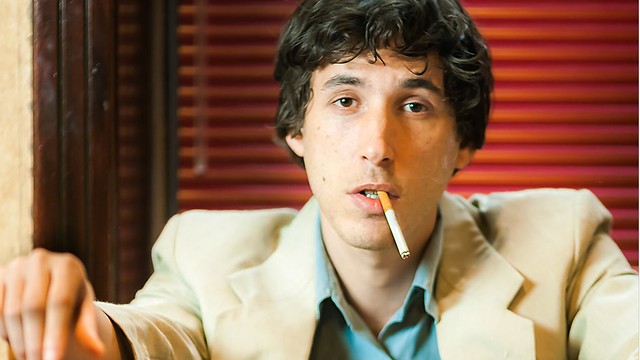 Although Donald is no longer with The Virgins, you get a real sense of what it must be like to hang out with this easy-going chap in a video made by Julian Casablancas’ Cult Records, which released the band’s second and last record in 2013:

Watch Donald chat about recording in the Cult Records video from March 11, 2013:

Donald and his band shine when they take up an instrumental odyssey, such as with the long break on his song “Scarecrow,” also from his debut solo album Out Calls Only. The sonically mesmerizing tune held the audience’s hushed attention as the band focused on their guitars. As others have noted, “Scarecrow” owes a tip of the hat to Television’s “Marquee Moon,” so in some ways Donald hasn’t strayed too far from the influences on the post-punk sound of The Virgins.

With his guitar as his guide, Donald navigates each song deliberately, going where his spirit takes him and often transitioning genre labels.

In his song “Working It Out,” for example, Donald strikes an alt-country note, demonstrating that his psychedelic tendencies are grounded in roots rock.

Listen to “Working’ It Out,” released by label Washington Square Records, via Soundcloud:

Donald continues touring as the opening act for Brandon Flowers tonight in Cleveland, Ohio, and then next week with dates in Boston and New York City. (DC will surely see him headline a solo tour in support of his album soon!)

If you go to the show, go early and give your attention to the newly solo singer. You’ll surely find that you’ll want to get to know him better.