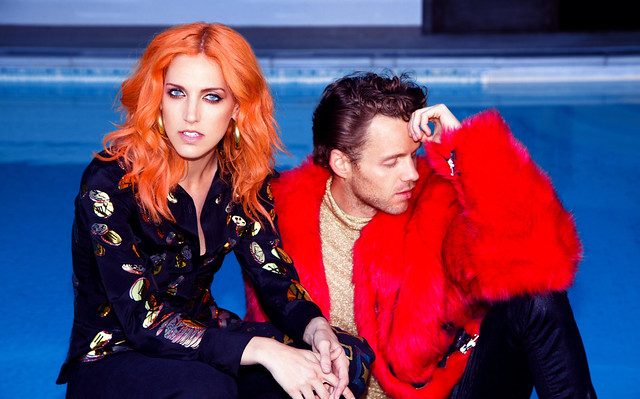 Bounding on to the 9:30 Club stage with fiery red hair and a silver jacket on Thursday, Oct. 1, Lizzy Plapinger’s energy was barely containable for MS MR’s opening song, “Reckless”. She danced so furiously to the uptempo beat, that one could only assume it would take weeks of recovery to heal.

‘Furiously’ is probably the wrong descriptor anyway, as Lizzy’s radiant smile hardly ever leaves her face. Let’s go with ‘enthusiastically’.

MS MR, from New York, is Lizzy (MS) and Max Hershenow (MR) with accompanying band members on bass and drums. Lizzy and Max met at Vassar College and formed a perfect union that metes out infectious, yet often dark-themed, music.

On their newly released second album, How Does It Feel, they often take it down a notch, with a few more introspective slow jams than their first album.

“Wrong Victory” grooves seductively and then builds to into an anthem-like refrain that I think is one of the highlights of the new album. “When your skin doesn’t feel like home. And I don’t want to break down and feel alone.”

Even as such, they did have many dance-ready songs to draw from. “Painted”, the first single from How Does It Feel, performed just before the encore break and much like the opening song, was another canvas for Lizzy to break off some more moves. That she still had the same energy level was nothing short of amazing.

Max hovered over his keyboard all night, dancing and mixing in a few vocals. The strength of many of their more atmospheric songs is Lizzy’s bell clear voice, but the subtle and necessary backing beats really gives each song its mood.

Case in point are two songs from their first album, Secondhand Rapture, “Bones” and “Fantasy”, with their mix of dark lyrics, “dig up the bones, but leave the soul alone” or “revolution from dissolution, hypnotizing and demoralizing”, and the moody, allure of the synthesizer and drum beats.

At one point, Lizzy doused herself with a bottle of water, maybe all the ‘enthusiastic’ dancing finally having taken its toll. She went from coiffured redhead to sleek mermaid. The primary effect being her smile became even more apparent.

When “Think of You” began, Lizzy proclaimed 9:30 Club as a “safe space” for the song. Presumably, as a place to commiserate among friends over being wronged. And there were many friends ready to listen. I don’t know if the final tally was worth a sold out label, but the place was packed.

MS MR ended with their hit, “Hurricane”, after 16 energetic songs, leaving the crowd mostly sated. But certainly ready for more.

A personal first for a headlining act, after witnessing dozens of shows at the 9:30 Club, both Lizzy and Max came out to the floor for a meet and greet and gave fans a chance to be immortalized in digital photography, smiling with the band. Still, Lizzy out smiled them all.