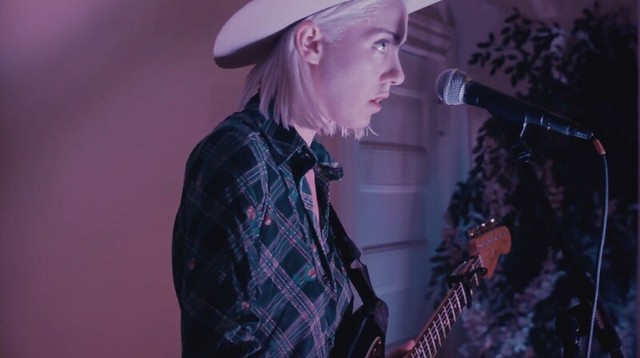 TORRES (aka Mackenzie Scott) started off the concert evening, opening for Garbage at the 9:30 Club on October 28, 2015. (And again on October 29, I only went to the first show.)

The waves of sound and riffs and beats vibrated through the 9:30 Club, tingling and priming the sold out crowd for what was to come. They had come to see the Shirley Manson fronted Garbage, but so many came an hour early, it must have been by design. They were also here to witness TORRES.

Whether she was crooning softly, belting all out with a howl or sharing lyrics of faith and loss and love, she didn’t hold back on her emotions.

Every song by TORRES was a baring of the soul.

What is any given song if not an emotional experience? A listener can grasp at the emotions that the artist is trying to convey at an intellectual level, and appreciate that, but the song’s true hook is about your personal journey and what you get out of it. Beyond what the artist is saying. And without that hook, that personal experience, there would no one to listen to the song. To feel it.

For me, the music took me back to the mid-90’s, when I was young and exploring the depths of what was good and interesting (a range that mostly landed near alternative rock and its offshoots). TORRES is not from that era, but her music makes sense as an opener for Garbage (who decidedly were). The crushing base, the often sludgy, vibrating guitars and at times raw vocals, brought it all back. She had a very Liz Phair sound (less “Why Can’t I?” and more Whip-Smart), especially with her “Cowboy Guilt” and “New Skin”.

TORRES released her sophomore album, Sprinter, last May. And with it nine expressive songs. Many of songs seem a little quieter and more introspective in the recorded versions. It must have been an acknowledgment of playing in front of a Garbage-eager audience, that she added a new flavor of emotion. She had even released a cover the Garbage song, “Special”, prior to these shows.

The title song of the album, “Sprinter”, is about running away from what you grew up into, but acknowledging there’s still time to go back, that maybe it wasn’t so bad after all.

The set burned fast and bright, clocking in at just shy of 30 minutes. She ended the set with an introspective song, “Strange Hellos”, that delves into the dichotomy of loving and hating the same person over time.

TORRES will make her triumphant return to DC at the Rock & Roll Hotel on January 19, 2016. This time, minus Garbage. Tickets for her headlining show are available online.