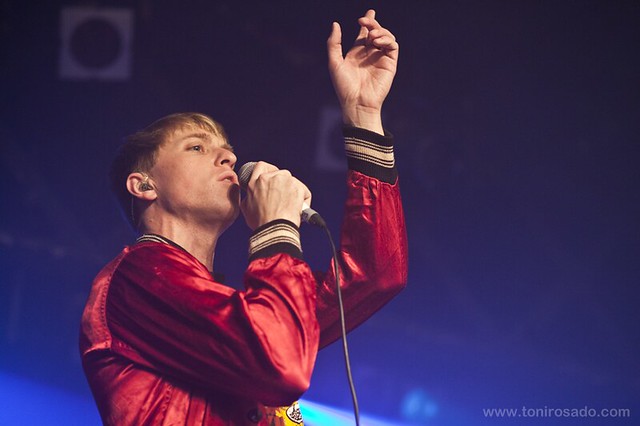 Lyrically, The Drums’ catalog takes a page from The Smiths’ songbook — with occasionally lonely pontifications of unrequited love or unfulfilled destinies — and “I Can’t Pretend” fits the mold well. To add to the mystique in performance, Jonny often sways or showboats as would a Morrissey when live in concert.

Sonically, The Drums’ often incorporate an airy synth beat throughout their songs, giving them an aura similar to the atmospherics of some of the most popular gems from New Order.

Watch The Drums perform “I Can’t Pretend” at Amoeba Music in Hollywood on Oct. 14, 2014, via YouTube:

Of course, The Drums revisited songs from their first and second albums, reminding us that they set their sonic template in their 2010 self-titled debut. So selections like “Best Friend,” which Jonny introduces to us as “a song about my dead best friend,” certainly echoes Morrissey’s musical interest in death but at the same time the rhythms of the songs are bright and fresh.

The song is brutally to the point: “You are my best friend, but then you died!” But the soaring “ah’s” of the song’s chorus impart it with a choir-like innocence that leave us dancing. We also

When listening to “Best Friend,” you can’t be blamed to sway along to it as Jonny does when singing it. Conceptually, I’m reminded a bit of New Order’s “Perfect Kiss,” another song about an ill-fated friend.

Watch The Drums perform “Best Friend” live in concert at a sold-out show in London at KOKO on July 21, 2015, courtesy of Moshcam:

As the show progresses, The Drums hit second-album Portamento’s most memorable selection with “Money,” and they again deliver an entertaining performance with a number lamenting that they would like some more spending cash.

Afterward, they are perhaps at their most like The Smiths with “Book of Revelation,” another snappy song from the second album that is undeniably catchy while also assuring us in as self-assuredly outcast as possible “that there’s no heaven and there’s no hell.”

The Drums close out their main set with “Wild Geese” from the new album, another song about alienation, albeit one with appropriately mournful instrumentation that highlights a softer, slower side to The Drums. Jonny and Jacob are both much more subdued in the song as they wind down their show.

But they bounce back for the encore and songs like “Let’s Go Surfing,” one of the reverberant early songs by The Drums that put listeners like me on notice.

The Drums were in damn fine shape, and with any luck, we’ll be seeing more of them soon. They certainly prove still have the legs to go the distance with this latest album and tour. So if we all hang tight, I’ve no doubt we’ll hang 10 with The Drums again soon!

Watch The Drums exhibit their quieter side live with “I Hope Time Doesn’t Change Him” from Encyclopedia for KEXP in Seattle on Oct. 9, 2014: