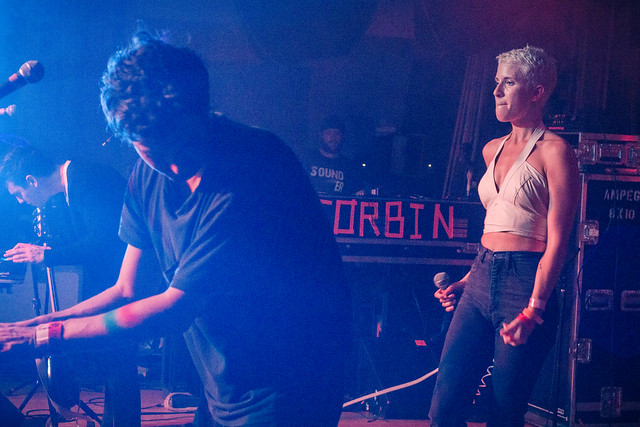 Claire Evans trailed off singing the catchy new song “Hologram” from the new album by YACHT and peered over the audience in mock concern.

“Whose phone is ringing?” she queried.

Turning to her right, she found that her own phone was apparently ringing at U Street Music Hall on Saturday night. She picked up the phone receiver, seated next to a synthesizer of course, and began to explain to the “caller” that she was at a show, so it wasn’t the best time to talk.

Claire and her YACHT bandmates then launched into “Ringtone,” another catchy new album from I Thought the Future Would Be Cooler, released last month via Downtown Records.

As Claire intimated, YACHT was conceived as Young Americans Challenging High Technology by Jona Bechtolt some years ago. Jona, who plays synth and guitar, eventually would recruit Claire as full-time vocalist, and most recently Rob Kieswetter on synth and bass. The trio stopped in DC for a show in support of the new album, easily their most accessible and appealing effort yet.

The new album is only the third to feature Claire as a full-time member, and her philosophical musings and occasional strutting are prime elements of a YACHT show today. Another signature element of YACHT is the extremely catchy disco-punk sound engineered by Jona — a sound that has comfortably escalated into full-blown old-school new wave. Melodically, “Ringtone,” a song about calling the one you love, is a bit more sonically scattershot; while “Hologram,” a song about coming back to life as a hologram, is more relaxed.

YACHT have always enjoyed tackling science-fiction concepts — another element that lines them up well with some early new wave bands, taken by their powerful new synthesizer capabilities when making “the sound of the future.” YACHT leans heavily into sci-fi as pop philosophy taken from the works of authors like Thomas More and Aldous Huxley.

In previous albums, YACHT may have gotten a bit heavy with themes of heaven and utopia, but they keep it “lighter,” relatively speaking, on the new album. And the best songs shine under this lighter touch — songs like “L.A. Plays Itself” and “I Thought the Future Would Be Cooler,” the opener and encore for Saturday’s show, for example.

YACHT revisited earlier material with a great deal of success as well, including the one-shot single “Plastic Soul,” their last release on DFA Records from early last year. It’s a song about becoming insensitive to all of the cool new stimuli around us, courtesy of digital devices and the like. In performance, the song really capture’s Claire’s playfulness and confidence, reminding you that it’s really important to see this band live!

Watch YACHT perform “Plastic Soul” at the Moog Sound Lab in Asheville, NC, around Moogfest 2013 via YouTube (published in August 2015):

YACHT also held a mirror up to their moment perfectly with a cover of DEVO’s “Space Girl Blues” at the two-thirds mark in their set. Like DEVO, YACHT have a fondness for reflection on the state of humanity and also like DEVO, YACHT are capable of producing extremely catchy melodies as well as utterly discordant electronic static.

Claire, Jona and Rob closed their U Street Music Hall show with a performance of “Psychic City (Voodoo City)” from the 2009 YACHT album, See Mystery Lights, which was the first to include Claire as a full-time member. The fun new wave anthem sets the template for the best of YACHT songs to follow, and it gives the audience a therapeutic opportunity to sing along and dance in place one last time.

YACHT have one last US date scheduled at present — tonight, Monday, Nov. 9 in Cambridge, Mass. Then they skip off to some dates in Europe for the rest of the month! But the L.A. new wavers are sure to be home for more concerts in the near future, and that will indeed make the future cooler.