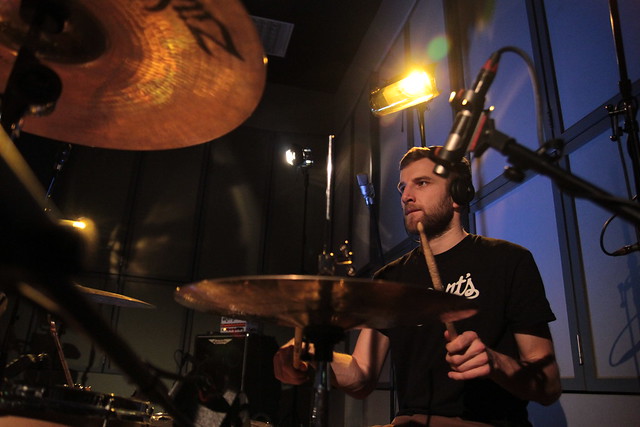 We Were Promised Jetpacks isn’t a band for which I can name every song, but with enough background, my expectations were for a sonically powerful and emotional set; for a band that was maturing, that was casting around for it’s stake in a scene. This isn’t meant as an aspersion, but a compliment; too many bands are complacent whereas WWPJ is earnest and yearning, the model for who might all want to be.

This is the band I expected, this is the band I saw, and yet the band I did not get. On stage, the philosophical anxiety existed in the lyrics but not the demeanor. WWPJ came to the stage with the swagger of musicians that have been together for years. They played like they were comfortable mid-way through their US tour, even though they thanked the enthusiastic crowd for the energy during their first stop in the US. They owned the stage, confident in their songs and their songs and skills. They pushed expectations and set new standards.

Amidst all that on-stage confidence, there existed a band that flowingly moved between moments of stasis. They opened the show with swagger and groove, moved into a crowd-pleasing known song, shifted into a song heavy on drums and bass, then rocketed up to a song that had guitar tones that spoke of the Cure. WWPJ moved like this all night, at times toward an abrasive falsetto, sometimes toward a heavy Scottish accent, and even once to a song that could have come out of a Queens of the Stone Age setlist, circa Songs for the Deaf (which is high-praise where I’m from).

There is something to be said for a band that knows its place. Knows what it does well, knows how to play to the crowd, knows it’s strengths and weaknesses. There are plenty that do this and I’m a fan of them. Because those bands know what they do, it’s easy to fall into their comfortable arms and be swept away on the recollection of past songs. It then becomes easy to become wary of those bands that are continuing a struggle – with success, with failure, with something in between. And then you find a We Were Promised Jetpacks and you recall the beauty of the struggle, the potential. It reminds you of yourself and the process of how you became who you are. The entire thing is oddly personal in a disconcerting way. And no matter how much you try to shake it, you just keep coming back to the realization that you like being back in that moment.

So go see We Were Promised Jetpacks when you have the chance. It’ll take you someplace interesting.