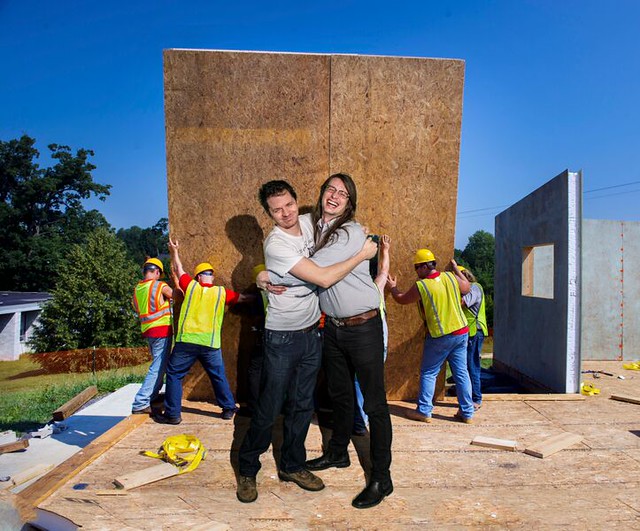 Earlier in the set, they performed “Signs,” which Ed described as a song about making the most of the town where you live and which appears on the band’s last full-length LP, 2014’s Party Jail. “Signs” is a typical song for Ed Schrader’s Music Beat — Ed explodes on the drums while he sings into microphone. Devlin weaves some very funky grooves throughout the song. And although we’ve spent most of our time talking about Ed so far, it is indeed the combination of Ed and Devlin in Ed Schrader’s Music Beat that gives life to the songs. You certainly wouldn’t be as compelled to dance without that wide bass sound.

Ed and Devlin aren’t afraid to experiment with their mold. While staying in their punk lane, they occasionally get rather jazzy or rather bluesy. Party Jail’s “Laughing,” a song about Emily Dickinson and ostensibly also a song about trying to cope with things, allows Ed to sing in a softer voice while Devlin adds some soothing vox in the form of “Duh duh-duh duh-duh” to the chorus, which features a truly catchy bassline.

At this point, I want to refer you to the video for “Laughing,” which demonstrates Ed’s quirky sense of humor. Even when they are being somewhat serious, Ed Schrader’s Music Beat are deliberately left of center. His sense of humor demonstrates what Ed means when he says he’s too weird for normal people and too normal for weird people.

Watch the official music video for “Laughing” on YouTube:

One of the things I rather enjoy about Ed Schrader’s Music Beat is that it’s difficult to pigeonhole them. You can listen to a 90-minute burst of sonic energy and see the band whip up a sweat while blasting through it. But then they turn around and deliver a more reflective piece that seems just as authentic to them as anything else they do. For all of their energy, which is infectious, they aren’t angry punks — they are more accurately disaffected. And most other disaffected bands aren’t nearly as entertaining.

Last week’s show at the 9:30 Club was the last for the year for Ed Schrader’s Music Beat, but we are sure to see more of the Baltimore-based duo in 2016, as they have continued to keep busy with a very full touring schedule and the release of additional songs since their last album. One way or another, whether you laugh or think, you’ll feel good after seeing them, so catch a show soon.