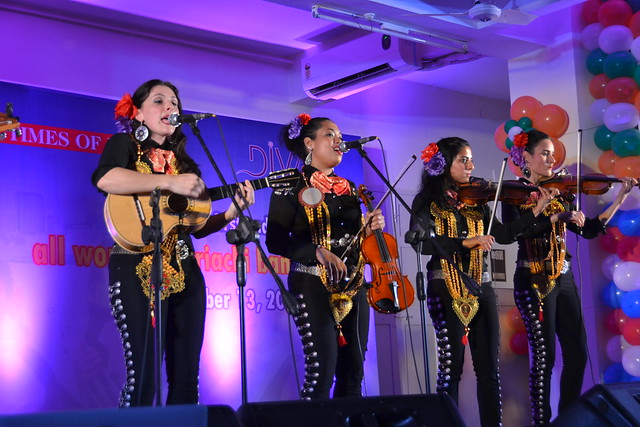 Flor de Toloache conducted the audience through a chorus singalong of “aye, aye, aye” in their own “Cucurrrucucu Paloma,” a sweeping romantic track that combines the power of a traditional mariachi song with their female voices. They also make good use of this combination in their performance of mariachi standard “Guadalajara.”

The quartet surprised early in their set with an extravagant cover of “Come as You Are” by Nirvana. Their mariachi-fueled take on the song is both flowery and haunting, engaging three of the women in harmonies that become particularly effective for the menacing refrain of “I don’t have a gun.”

They closed their all-too-short set with their own “Blue Medley,” a lovely, rolling selection that invokes an old-school happiness with its admiration of blue skies and bluebirds while saying farewell to “blue days.” The jazzy number, which mixes English and Spanish verses, was really quite idyllic and pleasant, and it demonstrated remarkable range for the ladies, who clearly don’t feel tied down by our expectations of a mariachi band.

During the main set by The Arcs, Mireya and company provided some terrifically appropriate atmospherics to the songs, particularly for “Pistol Made of Bones,” where they sing, play guitar, violin, and trumpet and generally characterize the pop-Western flavor that permeates the song.

Mariachi Flor de Toloache and The Arcs only have four dates left on their current US tour, starting tonight, Dec. 16, in Philadelphia and ending Dec. 20 in Nashville. You’ll be truly enchanted and entranced if you seize this rare opportunity to see the ladies as both opener and main act. As Flor de Toloache are also up for a Latin Grammy for their first album, we will surely soon see more shows announced for New York City’s first all-female mariachi band.