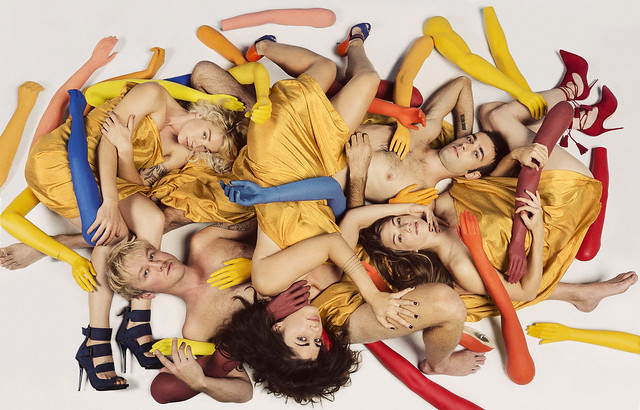 At the heart of Radiation City are Elisabeth Ellison on vocals and synths and Cameron Spies on vocals and guitar. I’m not certain how the band’s dynamics worked in the past, but on tour to support the new album with a stop at DC9 on Monday night, the couple dominated the proceedings when trading off on lead vocals, providing the audience with two different yet welcome flavors in their sound.

The crowded room enjoyed quite a full bill with Seattle’s Deep Sea Diver opening, and they make for great tour companions with Radiation City. But more continuity with their tourmates is found in the songs where Cameron takes lead on vocals, as his songs have a similar edge to them with forward guitar and soulful, worldly vocals. Cameron serenades his audience early with Radiation City’s “Winter Blind” from their 2012 EP, Cool Nightmare.

It is a distinguishing feature of Radiation City, however, that the band consistently has strong guitar forward for a dreampop band. The women of Radiation City — Elisabeth and Patti King — flank the rest of the band with their synthesizers on the sides of the stage but they sure do take center in many of the songs, particularly the catchiest of the new crop.

Early in the set, Radiation City treats us to “Juicy,” which is a wonderful melding of everything that makes the band interesting. The song starts out slow and quiet, with synths establishing a slowly rolling atmosphere. By the time it hits its stride, Elisabeth’s sweet vocals have emerged as the dominant ingredient in the mix. And then it hits a loose, fun chorus as the singer invites us to “come play with me.” Cameron then hits a funky guitar lick that inspires the song to spill forward into a slightly faster pace.

The other new songs are equally as interesting and engaging. Soon after “Juicy,” Radiation City perform “Oil Show,” an equally alluring, dreamy song that seems poised to break out into disco at any moment. Elisabeth sings another appeal — “And now the world is paved in gold/ And your Midas touch/ Tells me the night is young /” — and the world seems a little bit brighter.

Listen to the new songs like “Juicy” and “Oil Show” from Synesthetica by Radiation City on Bandcamp (and buy the album as well!):

While the new stuff won me over, Radiation City occasionally delved into its previous two albums for good material as well, and toward the end of the set, the band perform “Foreign Bodies” from their 2013 second album, Animals in the Median.

Above, Elisabeth and Patti share lead vocals in this pleasing, sunny performance of a love song directed to a lady named “Tanya.” New bassist Dasha Shleyeva has fun as she jams out in the background and drummer Randy Bemrose rounds out the group with jaunty percussion that adds to the band’s soulful pleasant outlook.

Radiation City continue their tour tonight, March 4, in the Boston metro area and then blast on across the country throughout March to end their current US tour with Treefort Music Fest in Boise, Idaho (before leaping into Europe). I never saw the band before the lineup change (new bassist) or the intimated shift in how the band does business. In interviews, Elisabeth and Cameron said their relationship was on the rocks and it affected the band, but they took a different approach to this new album and it paid off.

All I can say is that they are well worth seeing now, and I am going to guess they are better than they once were. Go see them when they tour near you!