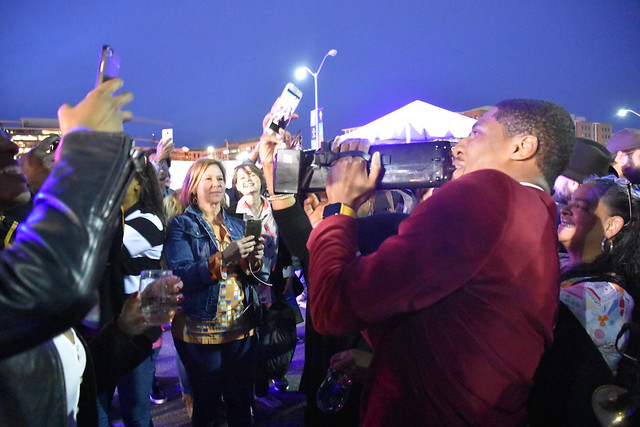 In their earlier set, Jon Batiste and Stay Human made a tour stop during a break from being the house band for The Late Show with Stephen Colbert to play some well-received favorites including their jazzy instrumental version of “The Star Spangled Banner.” The band also offers up original favorites like “Naima’s Love Song” and “It’s Alright” from their 2013 album, Social Music.

On the ground, the band continued the hit parade with selections like “Killing Me Softly” by The Fugees, among others. As Jon led a march across Yards Park, people were absolutely drawn to him. Both man and band were on fire, and the audience was struck giddy by the performance.

Here are some pictures of Jon Batiste first on stage, and then leading the impromptu parade at VinoFest 2016: 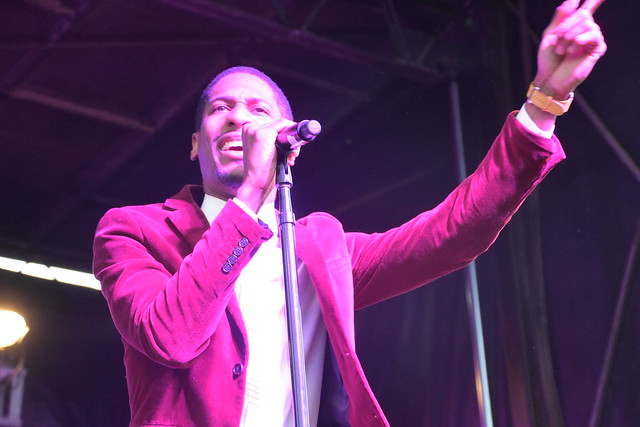 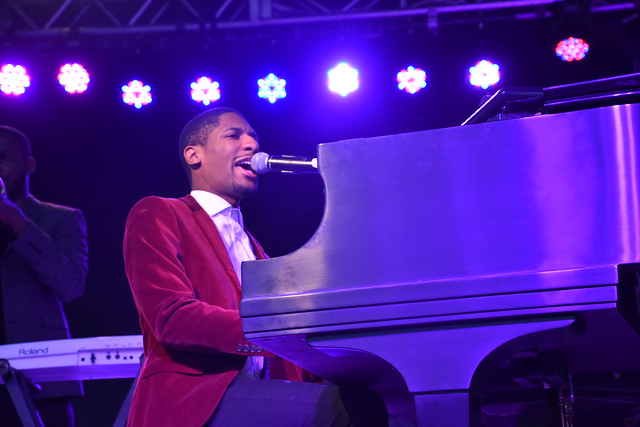 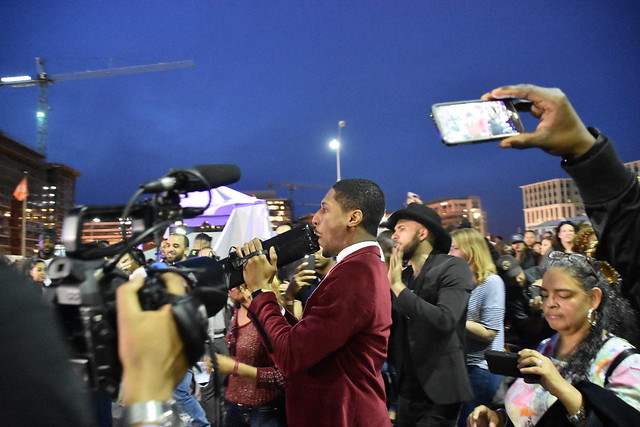 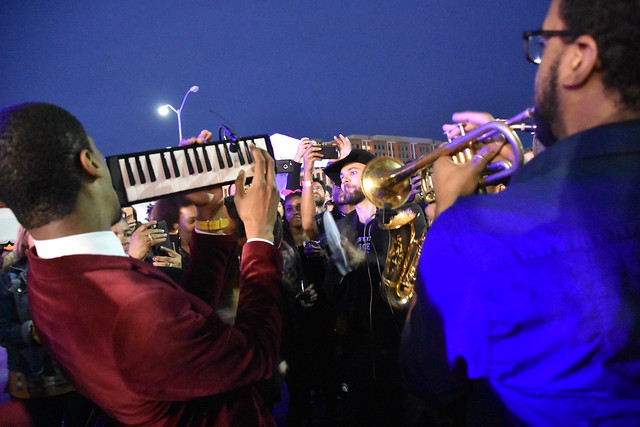 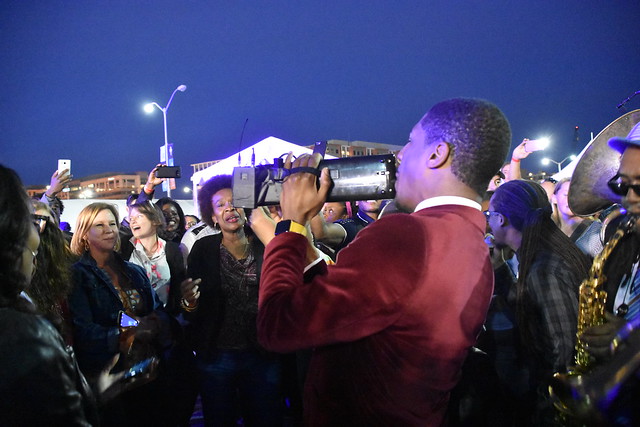 Jon and company’s “love riot” came at the end of a day of highlights for me during the VinoFest music program. Prior to Jon Batiste and Stay Human, the audience enjoyed the funk and go-go of legendary hometown heroes Trouble Funk. Timothius “Tee-Bone” David and Big Tony (W. Fisher) led a talented troop through some funky steps.

Tee-Bone threw in some moves and grooves while Big Tony laid down the bass. Tony is certainly a smooth operator! The man was cool before the Ice Age, and he would apparently remain cool in the face of global warming. Trouble Funk performed a popular mix of their hits, including “E Flat Boogie,” their popular smooth and funky dance number, and “Drop the Bomb,” the dynamic drum-driven party anthem.

Here are some pix of Trouble Funk getting funky at VinoFest 2016: 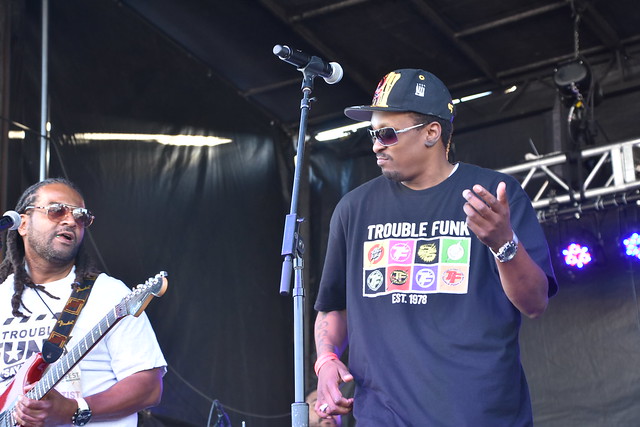 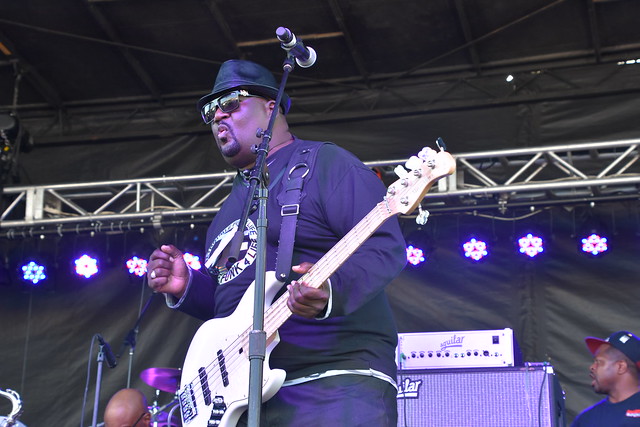 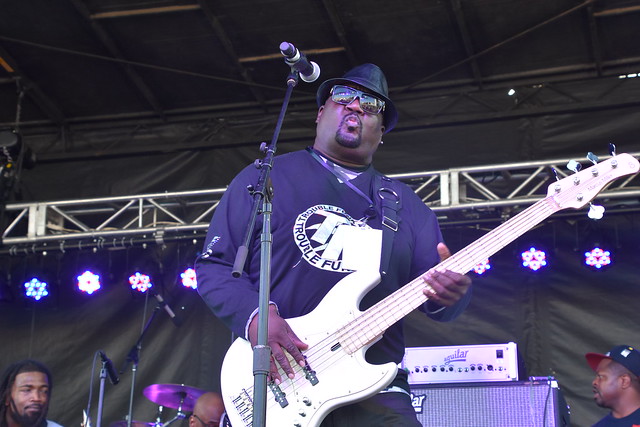 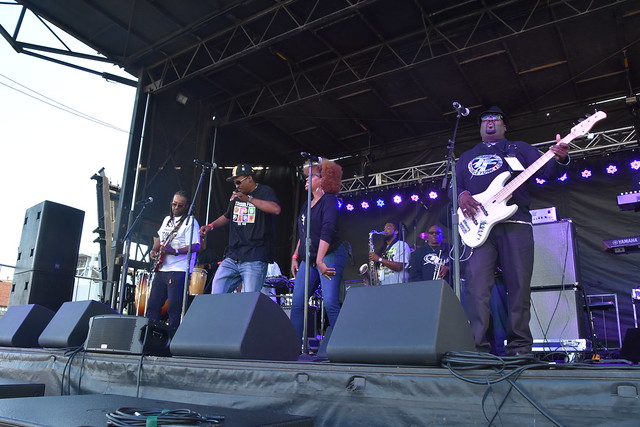 DC psych-rock favorites Paperhaus performed earlier in the day, and it was my first chance to see the new Paperhaus lineup. Bandleader Alex Tebeleff, on keyboards and guitar, was joined by bandmate and bassist Matt Dowling as well as brand new members guitarist Rick Irby and drummer Danny Bentley. Paperhaus performed their latest single, “Silent Speaking,” released last month in advance of a future second LP, and the band seemed to have not missed a beat with the departure of former guitarist Eduardo Rivera and drummer Tarek Mohamed.

Indeed, guitarist Rick and drummer Danny both brought rock-n-roll flair to the group’s dynamic, solidifying the Paperhaus taste for psychedelic guitar riffs with a mix of prog mysticism. The new single is certainly within the Paperhaus wheelhouse, although it’s a bit more electronic than some of their songs. It has a lovely psych breakout around the 3-minute mark that positively Beatlesesque in its composition before it comes roaring back into spitfire percussion that carries the song.

Paperhaus closed their set with a cover of “I Would Die 4 U” in tribute to Prince, and it was a very welcome cover indeed. After Paperhaus, VinoFest presented an extended tribute to the late R&B maestro with a DJ set of all Prince songs by DC’s DJ Hazzard, who kept people on their feet with a smart mix of the most popular tunes by the man.

Here are a few photos of Paperhaus in action at VinoFest 2016: 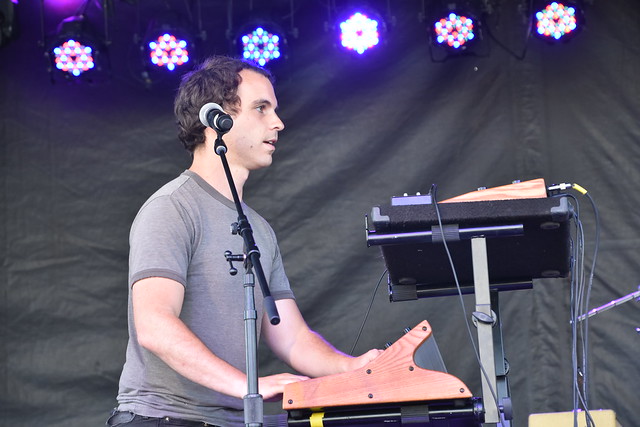 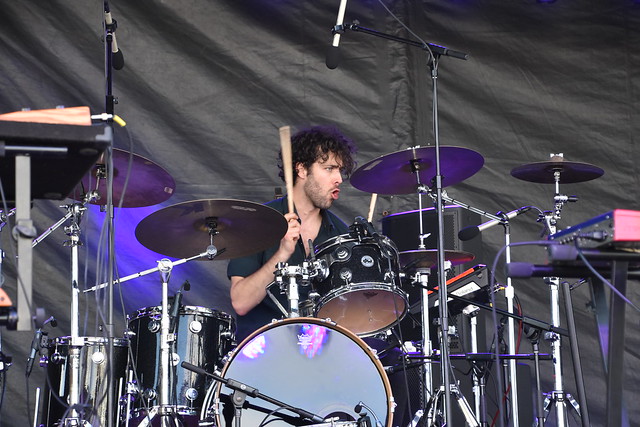 Lest I forget, VinoFest offered up some welcome wine selections at tasting pavilions around Yards Park, including a VIP pavilion where people also could watch the concert from a nearby haven. I personally enjoyed food from vendors The Local Oyster and Timber Pizza, both of which served up some very yummy offerings.

Of three years running, this was the strongest music program offered by VinoFest to date, and I regret that other commitments prevented me from staying late to check out The Original Wailers, who closed out the festival. All the same, VinoFest presented a fantastic lineup of music, and I look forward to what they whip up for next year.