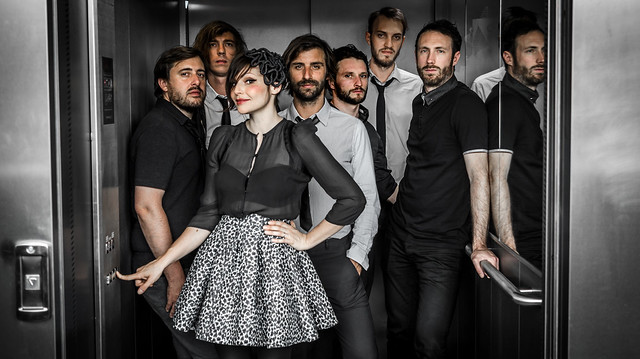 PopMatters hailed the album as the #2 pop record of 2015, and it hit #3 on the Billboard Electronic/Dance Album chart. The band officially released two singles from the album so far, including the high-energy “Lone Digger,” which came with a smartly animated video (viewed more than 12 million times!) that reminds us perhaps why natural enemies in the animal kingdom shouldn’t drink together.

Watch the official music video for “Lone Digger” by Caravan Place on YouTube:

During their tour, Caravan Palace stops locally at the 9:30 Club on Thursday, May 26 — a perfect place and a perfect time to get out and party.

Caravan Palace consists of vocalist Zoé Colotis and founding members Hugues Payen (violin), Charles Delaporte (upright bass) and Arnaud Vial (guitar) alongside Antoine Toustou (trombone, machines). They take their cues from influences as diverse as Cab Calloway and Daft Punk. All in all, Caravan Palace are a high-energy, upbeat dance machine with a refreshing sound built around horns and keyboards. Check them out!