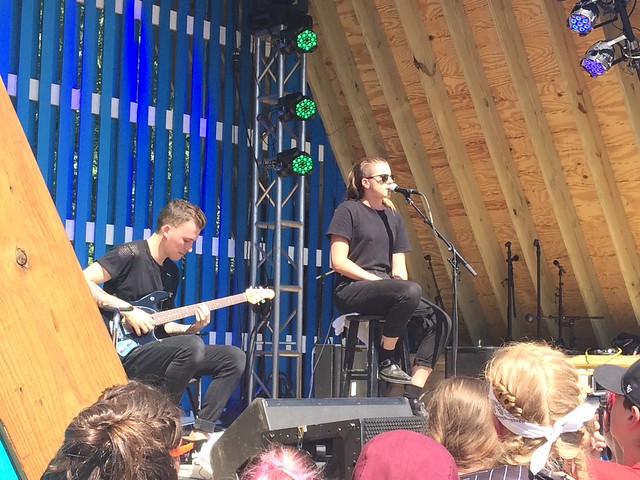 Sometimes it’s fun to just show up to a set with no expectations and no prior knowledge of the band. And walk away having thoroughly enjoyed it.

Maybe copying CHVRCHES, with the letter ‘V’ replacing a vowel, PVRIS (pronounced like the city) brought an incredible energy to their opening set (12:30pm) on Firefly’s Backyard Stage on Saturday, June 18th.

Or as they introduced themselves, “We’re Paris, we spell it with a ‘V’ because we’re third graders that don’t know how to spell.”

I highlight PVRIS (of the 35+ sets that I saw more than half of over four days), apart from enjoying it, because I witnessed two of their sets (they were rockstars and actually played three in total), to compare and contrast the concept of the main stage set and the acoustic stage set. Many bands/performers did this, and I intentionally went to both sets for three of those.

Formed in Massachusetts in 2012 as a metalcore band, they changed their name, style and line-up soon after, and now are considered rock and electropop. They released their first album, White Noise, in 2014.

Many of their songs are stadium-like anthems, that play well for a big crowd. The Firefly crowd ate up songs like “You and I” and “My House”, as they both lend well to full-throated sing-along chants.

The energetic “St. Patrick”, their first single, highlights Lyndsey’s powerful voice and the hook, “gimma something to talk about”, kept everyone dancing and sweating.

When they moved over the Coffee House Stage a couple hours later for an acoustic set, there was only two members to start (apparently the others went for drinks…), but really the highlight and the focus of this set was Lyndsey and how she sang the hell out of each song. Even seated on a stool, the songs came alive.

“You and I”, with the haunting background music and slow build, brought chills to the packed out crowd (Note: I did not fact check this statement). Every one of the shows at The Coffee House Stage I went to were crowded to the brink of overflowing.
[youtube https://www.youtube.com/watch?v=D0NqJgcbHe8]

The second set was during the hottest part of the day and there was no shade to be had. People were here and braved the elements in exchange for a good show. At one point Lyndsey inquired, “Does anyone else have swamp ass, or is it just me?” People laughed, but we all had the heat sweats and were all suffering.

They ended the Coffee House set with “My House”, which was also perfect as an acoustic version, and again generated a healthy amount of sing-along from the eager crowd.

The Coffee House also gave the bands opportunity to say whatever they wanted, and play whatever they wanted. The sets are short, only 30 minutes. And it was often less formal, some artists didn’t even have a set list or didn’t adhere to one if they had it. During the PVRIS set, Lyndsey was very personable and chatty, while still managing to fit in six songs.

When it was over, everyone dispersed reluctantly, yet excited for what the rest of the day had in store.