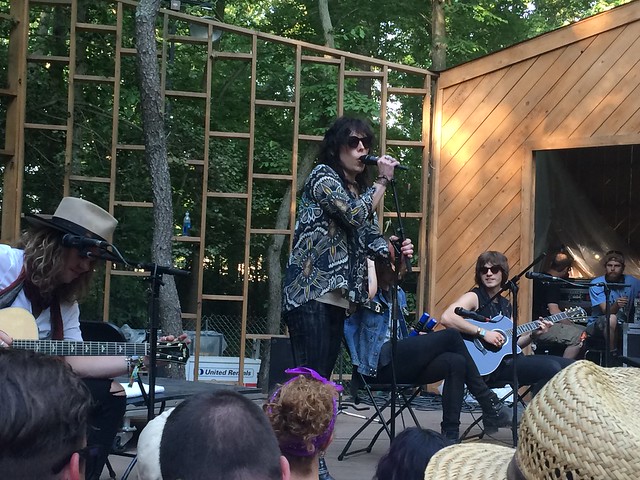 The Struts are showmen through and through.

This glam rock band from England is certainly channeling Queen, especially with Luke Spiller’s voice as pure and resonate as Freddy Mercury’s. After all, their name is The Struts and that is what they did.

Their music is classic, exuberant rock and roll. They mobilized the Firefly crowd at the Lawn Stage to great heights of excitement and sing-a-longs. Anyone that didn’t know them going in, certainly walked away with full intention of adding them to their playlist on repeat.

I first witnessed The Struts enter the press tent for an interview, I didn’t yet know which band they were, but I remember thinking these guys are going to put on a good show.

Luke got on stage and exclaimed, “Wow! We didn’t expect so many! Day 4, that really separates the men from the boys!”

I also caught them later at The Treehouse Stage, for a shorter acoustic set. It was again packed to the brim, thankfully I was able to get close. The audience this time was even more happy to be there.

The Struts are Luke Spiller (lead singer), Adam Slack (guitar), Jed Elliott (bass) and Gethin Davies (drums). They began in 2010, and currently have one album, Everybody Wants, released in 2014.

During the acoustic set, they asked the crowd for requests. Because someone was holding up a David Bowie head from Labyrinth, they went for a great cover of “Rebel Rebel”. (Note: See the video at the end.)

Always chatty and joking during the Treehouse Stage set (like comparing everyone there in the woods to Hobbits gathering in the Shire), Luke did stop to reflect, “Touring in the USA has changed our perspective on our career and music. The amount of beautiful fans we have, we love you all.”

“Kiss This” played loud and live as a stadium rock anthem, is audaciously over-the-top entertainment. Played acoustically, it is a powerful look at taking charge of your life.

The Struts are never more in their element, then when the crowd is fully singing along. In the intimate setting of the Treehouse Stage (and in the sweet, sweet shade), few people refrained from joining in. The crowd almost could have performed the show themselves. Luke encouraged everyone, “Sing with us, that’s the impact.”

Indeed, The Struts were impactful. Don’t walk, run to their next show.

I was standing right next the women that recorded this video! (See my head at 3:14 and the side of my face at 3:44)