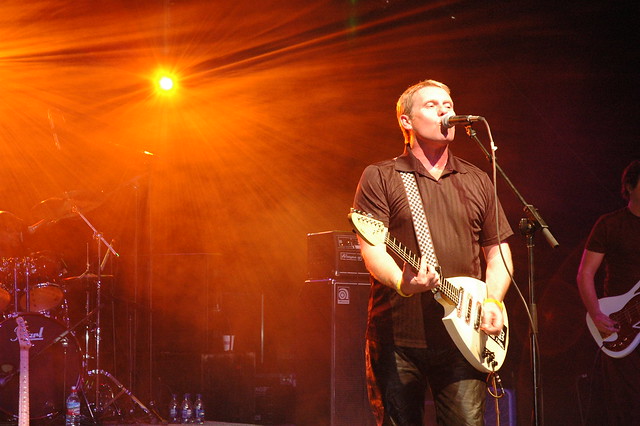 Dave Wakeling of the English Beat (Photo by Eugenio Iglesias)

Well, the English Beat recently sold out a show at the 9:30 Club, but I’m going to take a moment any way to remind you of why.

Dave Wakeling, forever Birmingham-born #1 ska singer, is bringing the English Beat around to the 9:30 Club again, this time to open for their friends Squeeze in a dynamite show on Tuesday, Oct. 11. (But wait! They also are playing at nearby Bottle & Cork in Dewey Beach, Delaware! Read on for details.)

The English Beat is on the cusp of releasing its first new album in more than 30 years with its upcoming full length Here We Go Love later this year.

The band of course have a string of well-regarded hits that have formed the backbone of a very successful touring act for quite some time now. Dave and company enjoy stirring live renditions of popular tunes like “Save it for Later,” “Mirror in the Bathroom,” and “Twist and Crawl.”

Remind yourself of the fresh energy of the English Beat with a listen of “Whine & Grine/Stand Down Margaret” on “Rude Boy’s Revenge & Coffee Hour” from a few years ago via Soundcloud:

“The venerable English Beat have been revitalized this year with a new toaster — King Schascha. For a 2-tone band, a toaster isn’t mechanical, but in King’s case, he’s certainly electric,” I wrote. “The reggae rhymer from San Diego effectively got the very full house at the 9:30 Club dancing right away on Wednesday, Nov. 25, paving the way for band leader Dave Wakeling and his time-tested repertoire of ska and reggae. They kicked things off with ‘Rough Rider’ from the debut album by the English Beat, 1980’s I Just Can’t Stop It, and the entire audience was moving and grooving from the very first note.”

If you’re coming to see Squeeze at the 9:30 Club, get there early for the English Beat! There are no tickets available, as the show has sold out. Keep your eyes open for resales (at fair prices) or maybe a last-minute release of any extra tickets the 9:30 Club may be holding back?

Oh, wait, if you cannot wait to see the English Beat, you can catch them at the Bottle & Cork in Dewey Beach, Delaware, on Sunday, August 28. That’s this weekend! What better way to celebrate the waning days of summer than to hit the beach with Dave and company? Tickets for that show are indeed available online (and at the door).